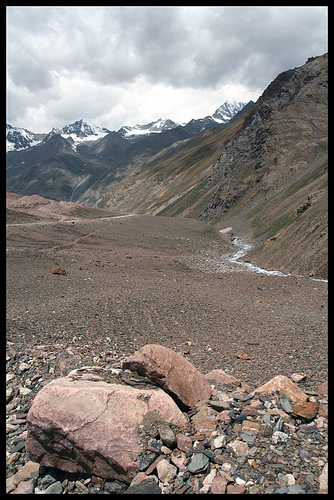 PALAMPUR: The continuous drought conditions and failure of monsoon for the past three consecutive years in Himachal Pradesh, has resulted in a loss of over rupees 200 crores to the state every. Besides, flash floods in the state had damaged property worth rupees 1000 crores. The apple, potatoes and other off season vegetable crops playing significant role in the economy of the state have also been adversely affected.

This hill state had faced the worst ever drought conditions last year. In last monsoon the state has recorded very low rain fall as compared to the previous years. In the absence of adequate rain fall in the catchments areas of rivers Beas and Sutlej, the water level in Govindsagar and Pong Dams of the state also remained very low adversely affecting the power generation in Pong and Bhakhra power houses of state during winters. There was also no rain during winters in the state. The state experienced last rain fall of monsoon in first week of September 2002 and after that there was virtually no rains for four months.

Higher reaches in the state had little or no snow fall this year. The experts working on water harvesting system in the state are of the view that in the absence of snow on the high hills, the rivers like Sutlej, Beas and Yamuna will also go dry in the coming summers as the melting of snow in the hills will be over by the middle of May. Farmers and fruit growers have no other alternative except to change the crop pattern.

As various national and international agencies have already cautioned the Himachal Pradesh government that the five major glaciers located in Kinnaur bordering Tibet and in Lahual and Spiti areas of state are melting with fast speed for the past five years because of impacts of global warming. The state government should take it very seriously and precautionary measures should be taken up to check the eco imbalances. A study conducted by Industrial & Technological experts of union government in this field reveals that most disturbing global environmental problems today is the steady and long term increase in atmospheric concentrations of so â€“called green-house gases such as carbon dioxide , methane, nitrogen and chlorofluorocarbons (CFC). The substantial increases or decreases in greenhouse gases are likely to induce climate changes within a matter of decades, with possibly devastating consequences for several countries and India will be worst effected. It is also reported that the world energy system is responsible for more than half the anthropogenic gas emissions. As such the majority of the emissions are due to fossil fuel use, representing about 75 % of the total energy use .

The state government in assistance with various private companies have taken up execution of 60 power projects in the state and some of them are likely to be completed by the end of this year. Though this is a good beginning for the state but no studies have been conducted on the â€œEvaluation of Environmental Implicationsâ€ and incorporation of necessary safeguards for the activities having a bearing on environmental quality. The state has also totally overlooked the roll of natural resources in the execution of these projects. The state government has given stress for technical feasibility and economic returns from these projects but low priority has been given for minimum environmental degradation and prevention of long term environmental side effects. No study has been conducted on the fast melting of glaciers in the state so far. Despite repeated warning from several environmental organization state is a silent spectator.

A Pune based NGO working in this field say that the main reason for sudden change in rain pattern in Himachal, is attributed to the reckless and unscientific mining, quarrying combined with construction of big power projects, cement plants, roads and buildings. The say that illegal mining and quarrying in the state has been going on unchecked for the past many years which further contributed to the environmental imbalances. The installation of two major cement plants the state have further deteriorated the situation. The dust, smoke and silt coming out of these plants has become a major environmental hazard. Besides, over five thousand trucks working in these plants have also become heavy source of pollution.

The study also revealed that because of environmental imbalances over 50000 hectares of land has very seriously been affected by mining and other construction activities. The large scale destruction of stateâ€™s forest wealth by illegal and legal mining have resulted in severe drought and flash floods in past few years. The report based on this study says that the Kinnaur, Solan, Shimla and Bilaspur districts which fall in the catchments areas of Sutlej are the worst affected where reckless mining has played a havoc with nature. The report has cautioned the state government as well as Union government with serious consequences if timely measure are not taken to check the environmental hazard.

The report has put question mark on the future of Bhakhra and Pong dams built at very high cost since no steps has been taken in past for large scale energy plantation in the catchments areas of rivers Sutlej and Beas as recommended by various government and non government agencies. Its capacity to hold water is falling year after year because of heavy siltation caused by destruction of forest, mining and other activities in its catchments areas. Unless these activities are stopped a large scale of silt would continue to flow into these dams every year. The report says that the bed of both the dams have risen by four to five meters and nearly three times more sediments had flowed into these dams reducing the life to one third.

The report expressed concern that even the directions of Apex Court were kept aside and no action was initiated by the government in this regard. It may be recalled that construction of over one dozen small and big hydel projects are going on in the catchments areas of these two rivers and entire mud, silt and sand in tons is being flown to the rivers daily.

It is an open fact that the Himachal Pradesh government has no environment policy, therefore construction activities on the hills and other mass movements have caused irreparable loss to human environment. Sutlej Valley falling between Kinnaur and Bilaspur regions which at one time used to be covered with green forest and was rich in flora and fauna have gone barren because of reckless mining, construction of big power projects and cement plants. In Beas valley falling between Manali and Mandi, large scale destruction of forests have been reported in past fifteen years.

It is on record that the state government has been facing a grave situation and has suffered losses worth crore of rupees, it seems still it has not learnt any lesson. Still it has given nod for setting up of two more cement plants in Chamba and Mandi districts recently. Besides, it has also granted lease to a big industrial house to extract lime stone from Arki tehsil of Solan district for commercial use and carry it to outside the state. If these three plants are installed in the state, it would further uproot thousand of people and create environmental imbalances in 20,000 hectares of land.

The cement plants and extraction of lime stone in the state has not given much revenue to the state, rather it has caused large scale destruction of natural resources and turned the green hills into barren. It may be recalled that the cement plants have been availing complete tax holidays therefore they are getting total Income-tax as well as Sales tax exemptions causing loss of crore of rupees to the state exchequer. Even in next ten years no revenue is expected from these cement plants.

The time has come, the state government should form a strong environment policy. The present disaster created by the nature in the state should be treated as an eye opener and the environment has emerged as a question of survival of human race in this hill state. It should have to be over and above the politics.