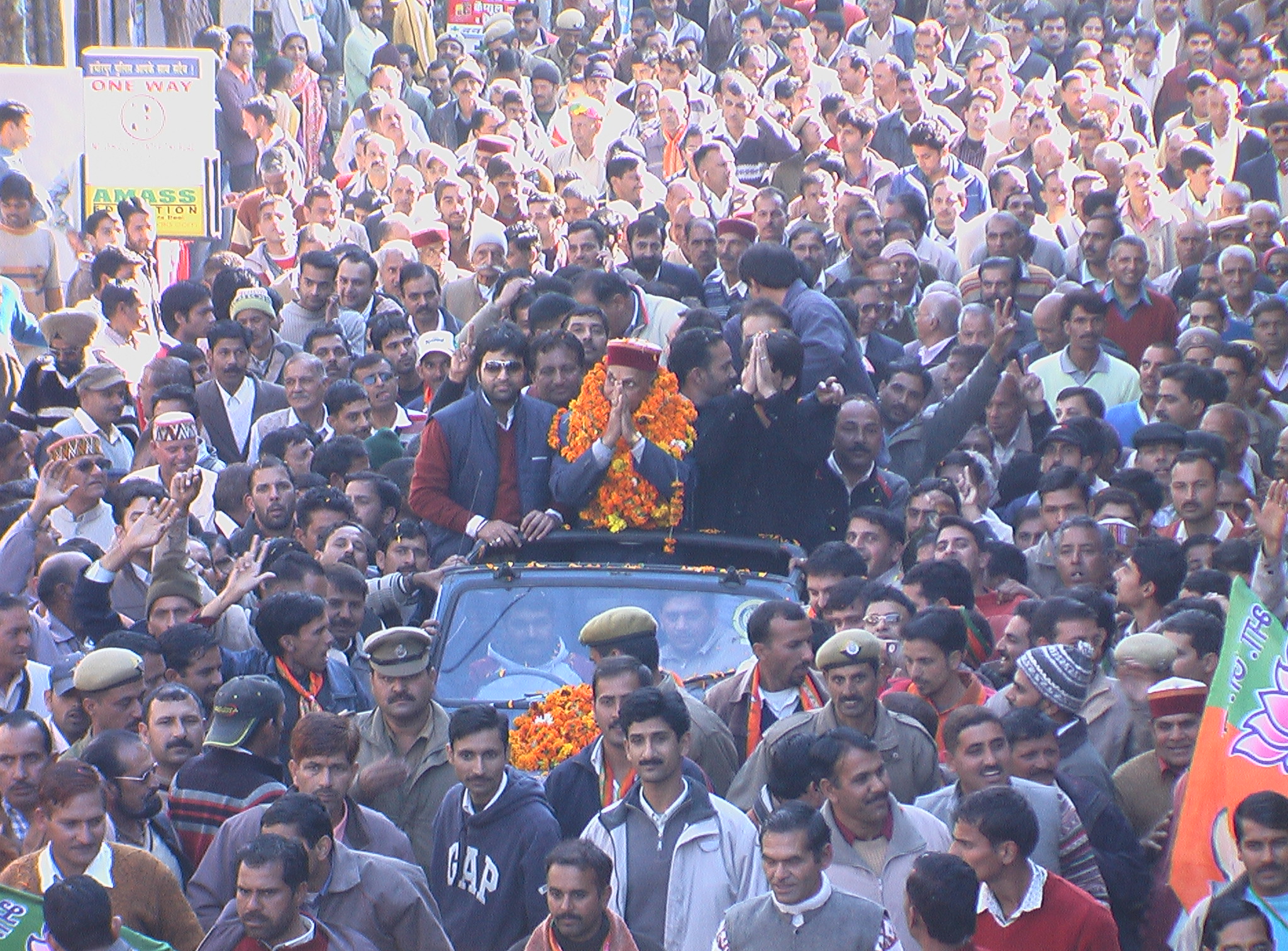 Congress won five seats in Kangra, two each in Una and Chamba and one each in Hamirpur and Bilaspur districts. BSP also one seat from Kangra and an independent, Rakesh Pathania, a BJP rebel also won from Nurpur of Kangra district.

Senior BJP leader and chief ministerial candidate, Prem Kumar Dhumal became the front runner party candidate to win the election with a record margin of 26,007 votes. Dhumal got 35,054 votes as against 9,047 by Col. B.C. Lagwal of Congress.

Tulsi ram of BJP became the winner with lowest margin of sixteen votes against formidable Thakur Singh Bharmauria of Congress from Bharmaur Tribal seat of Chamba.

Ghumarwin assembly segment of Bilaspur district maintained its old myth of electing a person opposed to the power. A newcomer and former NSUI leader, Rajesh Dharmani won this seat defeating another Dharmani of BJP.

Ishwar Dass Dhiman, the leader of BJP in state assembly who was elected to the assembly for fifth time won the seat with a huge margin of 10,375 votes and got the benefit of fielding of Prem Kaushal, a Congress rebel in the contest. Dhiman got 24,441 votes as against 14,046 by Suresh Kumar of Congress and 6,836 by Prem kaushal, the Congress rebel.

Anti incumbency wave coupled with sharp rising prices, worsening of law and order, growing unemployment and failure of the Congress government to implement its last election promises led the Congress to fair badly in the elections in the lower hill areas of the state.

Secondly, the decision of the BJP to project Prem Kumar Dhumal as the chief ministerial candidate for the state also paid well and people believed the version of the BJP leadership. Moreover, the work done by another former BJP chief minister, Shanta Kumar also helped the party to tell the people that the BJP is a united house and he has full faith in the state leadership of PK Dhumal.

There was mass jubilation all around over the election results and people danced in joy and distributed sweets amongst them and the passer byes.

Prem Kumar Dhumal, the chief minister designate of state supervised the election results from Hamirpur circuit house and had talks with the reporters of Print and electronic media that had gathered in Hamirpur in large number to cover this historic event.

He said that it was a victory of the party, the people of the state and those who were upset with the anti people stance of Congress.

He said,” The main endeavor of his government will to provide justice to all and to order an enquiry into all such issues that rocked the state during the Congress regime including the CD issue. I will try my best to provide neat and clean and transparent administration so that people are fully benefited with the policies of the BJP government”.

Replying to a question, he said that he would do his best to make Himachal Pradesh a Power state and for this additional power would be produced. He lamented that the previous Congress government failed to generate more power and was to be blamed for putting the state in fiscal crisis.

Dhumal thanked the people of state in general and Hamirpur district in particular for posing faith in the BJP. “The BJP is my mother and I will try to abide by all decisions and policies of the party,” he told reporters.