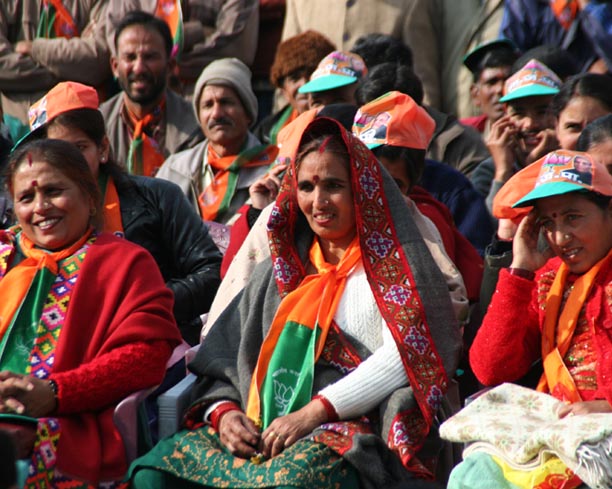 BJP, the main opposition in the state of Himachal Pradesh is all set to sweep the elections in Hamirpur district thanks to the decision of party high command to project local MLA, Prem Kumar Dhumal as the next chief minister of state. Dhumal had served the state as chief minister earlier too from 1998 to 2003.

Dhumal was elected from Bamsan seat of the district and this time too he is contesting from the same seat. Earlier, he had broken the myth that no one could win this seat second time in succession. He first won this seat in 1998 and later on in 2003.

The BJP has fielded its candidates from all the five seats of the district and one of them, Vijay Agnihotri is the latest entry into the electoral politics. He was given ticket replacing Babu Ram Mandyal, who had lost election last time. The other party candidates are: Ishwar Dass Dhiman, former Education Minister from Mewa (reserve), Baldev Sharma (Nadaunta) and Ms. Urmila Thakur from Hamirpur seat. Sharma is the district BJP chief. Dhiman and Sharma are also the sitting MLA’s.

Though the Congress, BJP, BSP and Lok Jan Shakti party have fielded their candidates from all the five seats from the district, the main fight is between the candidates of the Congress and the BJP.

While the BJP is trying to make it five-nil this time, the Congress hopes to retain two of its earlier seats of Hamirpur and Nadaun. Congress seems to be strong in Nadaun from where HP Youth Congress chief, Sukhvinder Singh Sukhu, who had won the seat in 2003 elections, is contesting. There is nothing adverse against him. However, the decision of the BJP to field a new man from the Nadaun seat has upset the calculation of Sukhu. Sukhu had secured massive Brhamnin votes last time. However, they are likely to help person of their own caste this time and that is helping the BJP nominee to win the election.

From Mewa (reserve) seat, the decision of senior Congress leader, Prem Kaushal to contest as an independent candidate has harmed the cause of party candidate, Suresh Kumar, who is fighting this time against old war horse, Ishwar Dass Dhiman of BJP. Dhiman always won the seat due to infighting in the Congress and this time too he is having the same feeling.

There is a tough contest on Hamirpur seat from where two former lady candidates are in field. They are Anita Verma of Congress and Urmila Thakur of BJP. Both are trying their best to win the election to enter the Vidhan sabha. Ms. Thakur is getting the support of Dhumal factor and that is why her success is sure.

The victory of Prem Kumar Dhumal from Bamsan seat is certain. He is all set to increase his victory margins this time and to create a new record. Congress has fielded a new man in Col. B.C.Lagwal this time ignoring the claim of Kuldip Singh Pathania, the former HP Youth Congress chief and a close confidant of chief minister, Vir Bhadra Singh. Supporters of Pathania too are working for the BJP to teach a lesson to Congress leaders for ditching their leader.

From Nadaunta seat, the district BJP chief, Baldev Sharma is on march to enter the Vidahn sabha for the third time, thanks to infighting in the Congress. Congress has reposed its faith in Vidya Zar. This has created a sense of resentment amongst the supporters of Manjeet Dogra, former MLA and they have fielded Mrs. Arvinder Kaur Dogra, the wife of Mr. Dogra. This way, the contest has become triangle thereby giving benefit to the BJP nominee.

A visit to various parts of the district shows that pro-bjp wave is discernible there and people are going to vote for the BJP to make Dhumal as the next chief minister of state.

Rajinder Singh of Harsaur said that whenever local man was made chief minister, the development came to the area and that was why people were going to vote for the BJP this time. He said that the Congress ignored the people and for this, it will face its waterloo in the coming elections.