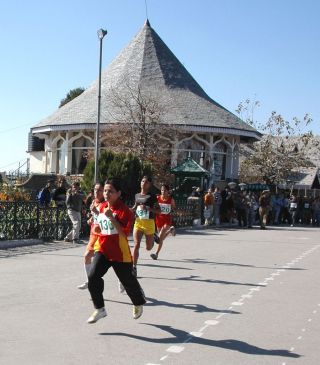 Shimla: With cold weather settling down over the hills, it was a test of the fittest for the over 2000 long distance runners at the 3rd Great Himalayan Run that was held in the state capital on Thursday.

The youngest of the competitors who participated were barely six years old and the oldest participants were as much as 70 years old. The race attracted cross country runners from Delhi, Maharashtra, Rajasthan, Haryana, Bihar, Madhya Pradesh, Uttar Pradesh, Punjab, Chandigarh Uttrakhand and other states. In all there were over 2000 long distance who participated in the Great Himalayan Run.

In the 12 kilometer run for men category the winner was Manoj Kumar from Rajasthan. He got the better of Himachali lads Rakesh Kumar from Una and Hem Raj from Jogindernagar, who came second and third respectively.

For women the competitive section was 8 kilometers and Guddi Devi from Mandi emerged as the winner. The second position was bagged by Suntia from Uttar Pradesh and the third position was taken up by Rekha from Mandi. 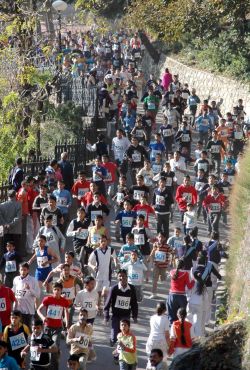 In the under-20 category for boys the winner was Shashi Kant from Delhi and Sakesh from Mandi and Nitin from Solan coming second and third respectively.

With the objective of promoting tourism and encouraging children and the not so fit to take to running as a fitness regime, the event started three years ago is organized by the department of Youth Services and Sport in collaboration with Himachal Tourism.