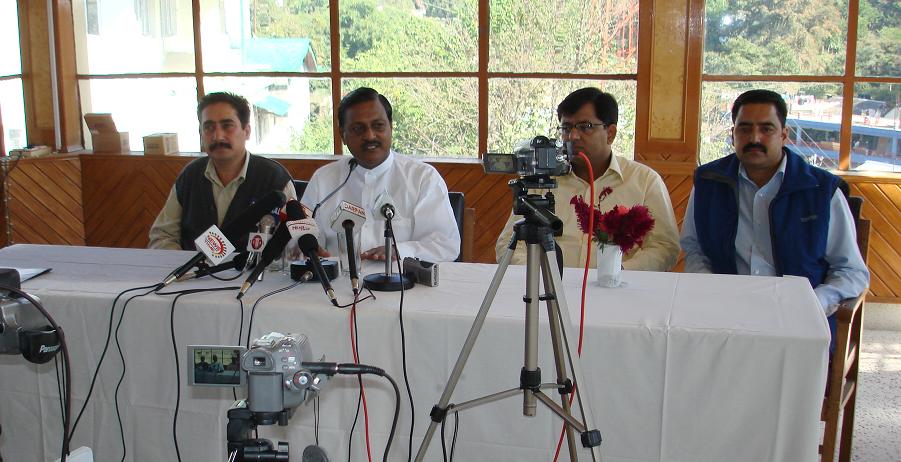 PALAMPUR: Mr. Sat Pal Jain, senior BJP leader and in-charge H.P. state BJP affairs, today categorically stated that BJP would not announce the name of Chief Ministerial candidate for H.P. Pradesh before the completion of assembly elections in the state. He said both Mr. Shanta Kumar and Prem Kumar Dhumal would campaign for the success of BJP in the state and after the completion of poll process in the state the BJP parliamentary board would announce the name of Chief Ministerial candidate in consultation with the party MLAs of the state.

In reply to a question Mr. Jain said that recent statement of leader of opposition in H.P. Assembly and senior BJP leader Mr. I.D. Dhiman that next government in the state would be formed under the leadership of Prem Kumar Dhumal had no approval from the party high command and his statement carry no weight.. He said he would ask Mr. Dhiman that under what context he had issued such a statement for which he was never competent. He advised the leaders and workers of the BJP not to approach the press on such crucial issues otherwise disciplinary action would be initiated against them.

Mr. Jain who was addressing a news conference here this morning said BJP was fully prepared for the ensuing vidhan sabha elections for the state and names of the party candidates would be announced after Diwali. He said BJP had already finalized the names of three candidates for the three constituencies of tribal areas in the state and BJP command would soon declare their candidature. He said party would give a united fight to congress.

Appreciating the free fearless role of Election Commission of India, Mr. Jain said, the commission had taken very bold step by rejecting the demand of congress for postponement of assembly elections in the state for March next year. He said the election for the state assembly had been advanced because of writ filed by the congress MLAs of the state, who had approached the H.P. High Court for early elections in the tribal areas and BJP had no role in it. He said the all the three MLAs who approached the state High court very close confident of Chief Minister Vir Bhadara Singh and without his consent they had not filed writ. He said now Vir Bhadara Singh was raising lot of hue and cry and blaming the election commission for early elections in the state was highly uncalled for from persons who was Chief Minister of the state for the past twenty years. He said Election Commission was an independent constitutional body and political parties had no right to interfere in its functioning and criticize its actions.

He termed the recent statement of Chief Minister Vir Bhadara Singh that term of his government would end on March 9,2008, next year as irrelevant and absurd. He said whatever Vir Bhadra Singh was saying, it reflects that congress was not ready to face the electorate in the state and it had already lost the ground even before the results of assembly elections. He said instead of facing the electorate Vir Bhadara Singh was making excuse by blaming the election commission and BJP for the advancement of elections.