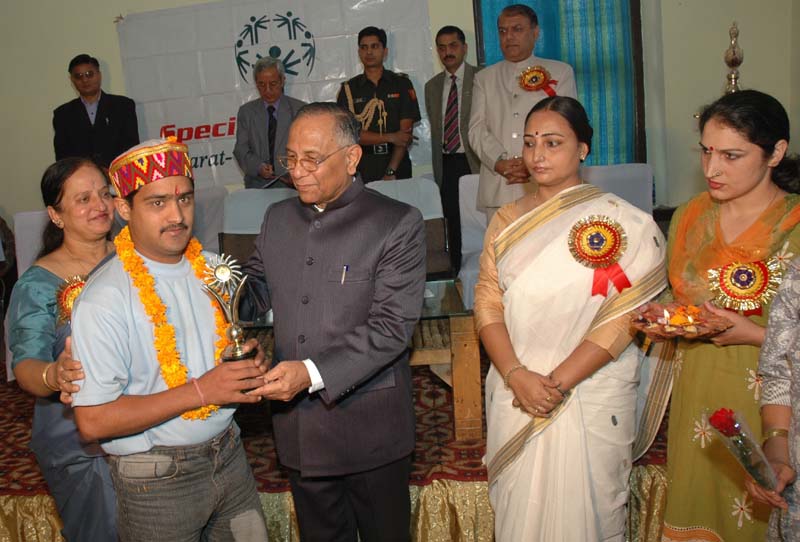 Himachal Governor V.S. Kokje called upon for extending whole-hearted Psychological support to the special children of the State.

Speaking on the occasion of Valedictory Function of Special Athletes selected to represent India in Special Olympics World Summer Games-2007 at Shanghai China organized by Special Olympics Bharat-H.P. at YMCA Hall, the Ridge Shimla today, Kokje said that responsibility of welfare of special children lied on the society and added that public and NGOs should come forward for this noble cause and it also becomes the duties of the sections of the society that it could extend its cooperation for running such institutions/ centers so that these special children could be brought into the nations mainstream.

Earlier, Governor gave away award of Honour for four special athletes, who are participating in World Summer Game-2007 at Shanghai. The awardees are Vikram Chauhan for Volleyball, Parnav Sharma for Badminton, Kumari Bharti for Bocce, Deepak Sharma for Cricket. Kokje also honoured two coaches. Mr. Sunil Dharma and Shamsher Singh on the occasion.

Dr. Malika Nadda, Chairperson, Special Olympic Bharat-H.P. presented a report on this occasion and said that Special Olympics World Summer Game will be held from 2nd to 11th October, 2007 in Shanghai People’s Republic of China. This Multi-sports event would be held for the first time in Asia and only second time held outside the United States of America. This is second time when H.P. is representing the Olympics. Earlier, HP had represented in 2003 in Bocce athletes, She added.