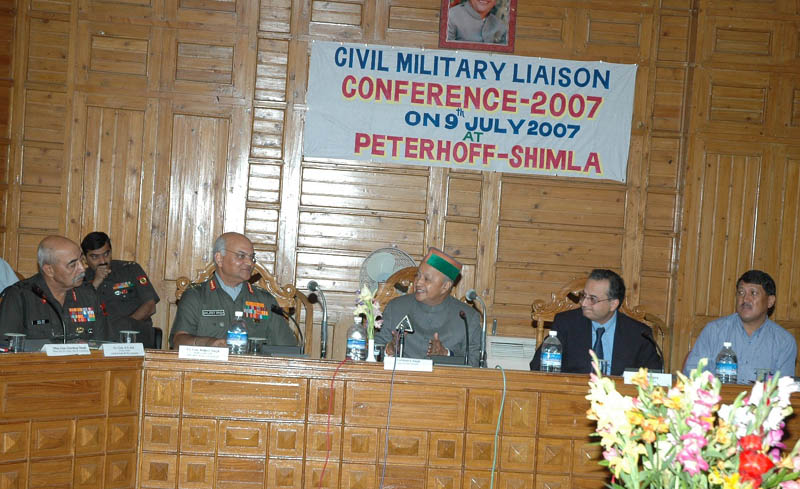 Himachal Pradesh Government has proposed to the Union Defence Ministry for raising of two more battalions of Eco-Task Force for Ravi and Beas catchment areas with a view to preserve the flora and fauna of the state since the state has already raised 133 Infantry Battalion (Territorial Army) Dogra Ecological Force on 15th of March, 2006, besides having more closer coordination between the civil and military administration for effective disaster management. This was revealed by Virbhadra Singh, Chief Minister, in his inaugural address of the Civil and Military Liaison Conference organized by the State Government at Peterhoff here today.

Chief Minister said that his government would be considering bringing a legislation, if required, with regard to marking of the pylons, transmission lines and ropeways in the valleys all over the state for the safety of air routes safety. He said that the matter would be examined by the experts and all related aspects taken into consideration so that any danger to the air safety was averted. He said that the ropeways and spans would be permitted only in the areas at low heights which did not hamper the air safety. He directed the Chief Secretary to take cognizance of the matter and report the matter to him on priority.

Singh said that the fragile ecology of the lower Himalayas, especially of Himachal Pradesh, was more prone to flooding of the rivers by flash floods and cloud bursts which had been causing massive damage to public and private properties as also to infrastructure, like buildings, roads and bridges, thereby throwing the normal life out of gear. He said that immediate relief operations were required to deal with such situations besides carrying relief and rehabilitation measures at war footing for which assistance of the military forces was imminent. He said that the people of the state, especially of Kinnaur, Shimla, Kullu and Mandi districts had suffered heavy losses due to the Sutlej floods which affected the normal life of the people living on the banks of the river and the communication remained disrupted for quite a long time which also hampered the relief and rehabilitation services. He appreciated the efforts of the army in carrying the rescue operation and immediate relief work during such emergencies. He also raised the matter of Tandi-Killar road condition in the meeting and urged the authorities to take remedial steps on priority to widen, improve and maintain the same since it was one of the most important supply line for the state to connect the tribal areas of Lahaul and Pangi.

Chief Minister said that Himachal Pradesh was making substantial contribution towards the armed forces of the country since every tenth soldier in the armed forces belonged to the state and almost every family had one or the other of its member serving or retired soldier who rendered commendable services during their active service period in protecting the national boundaries and rendering valuable service during national emergencies, natural calamities etc. He said that the state had 1,20,016 serving, 96,726 ex-servicemen and 1,059 war widows whose interests were being safeguarded. He said that his government would extend all help for setting up of more poly clinics in the state to cater to the health care services to the serving and retired soldiers.

Singh said that the annuity of the gallantry award winners had been enhanced substantially besides lump sum amount as a token of honour for the valuable services they had rendered to the nation which brought laurel to the state. He said that the state was proud of its soldiers who had shown exceptional courage and devotion towards their duty. He said that his government had implemented all the policies enunciated by the Government of India for the welfare of the serving and retired defence personnel.

Lt. Gen. Daljeet Singh, General Officer Commanding In Chief of the Western Command, raised issues of unauthorized crisscross wires in the valleys which had been proving fatal to the air force and urged for some suitable measure to ensure safety of air routes. He said that the roads leading to borders needed to be improved to accommodate the transportation of heavy machinery of the hydel projects coming up in the border district of Kinnaur. He urged the Chief Minister for providing land for development of the army welfare housing colonies in the state, separate grievances cell set up to redress the grievances of the serving and retired soldiers. He informed that ten more poly clinics were proposed to be opened to add to the 8 existing clinics.