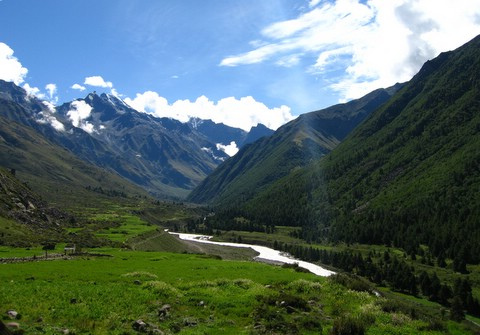 When you enter Himachal, it is with the promise that you will be two finger breadths away from heaven! The promise is more than fulfilled once you step into the magical villages of Chitkul and Raksham, deep inside the Kinnaur district in the valley of the Baspa river.

Once upon a time, Ishwar (God) must have decided to build a valley close to his own heart. He made a glacial river flow from the mighty Himalayas (temples of snow) into a plateau which was fertile and made occasional, noble men to live and enjoy in this land. The whole valley of close to 90km of land mass was elevated above the flat plains and because of its inaccessibility, stayed isolated, pure and beautiful. Luckily, we in India get to see this part of heaven in a small area called Kinnaur.

Close to the border with Tibet, the district of Kinnaur was isolated from the mainstream of even Himachal Pradesh till as recent as 1993. Even Indian nationals were allowed restricted entry. Therefore, the whole of Kinnaur was caught up in a time wrap, as few could enter and corrupt its pristine beauty.

The developmental chronology of Kinnaur has the old Hindustan – Tibet silk route passing along the high ridges with its share of old centers like Kalpa and Sangla. These were towns for trade and rest. Since mules, horses and yaks were the only mode of transport then the roads went along the high ridges of the mountains making them walk able not motor able. Since 1960, the national highway was built along the lower ridges with Recong Peo as the district headquarter/nodal center. The present highway is the life line of Kinnaur, and is in itself a magnificent piece of civil engineering know how, put together with lots of Blood and Guts. The roads are long stretches chiseled out of a sheer rock face almost like a tunnel with one wall missing.

2. To reach Chitkul and Raksham, one takes the national highway from Shimla to Rampur past Narkanda up to a dusty junction called Karcham. From Karcham, you take a detour to Chitkul and rise almost vertically close to 8000ft. via the Chung Sakhago pass into the Baspa valley. In effect, you have left the Sutlej below to meet its higher tributary the Baspa. Public transport is both reliable and advisable. The moment you enter this 95km. plateau after the adrenaline pumped ascent, you see the huge Baspa valley â€“ hydroelectric project. You will now hit the fairly well populated and commercial town of Sangla. From here on the drive is mostly level driving through some magnificent mountain scapes.

The road now continues up to Chitkul occasionally allowing a hill stream to gurgle and cross its path. You keep seeing the snow peaks all along with tall Chinar, Pine and Chilgoza trees. In early spring there is still a white snow carpet with the occasional green shrub pushing through and in late spring there is an absolute riot of colors till your vision reaches the horizon.

For a stressed out city slicker, this place is the perfect antidote. The Conifer trees here effortlessly blend with the snow from the peaks all within walk able distance of your hotel. A good pair of lungs and legs could take you to your own custom made corner of bliss. A lot of adventure treks start from Raksham, the simplest of which would be to Chitkul a mere 14km. away along the banks of the youthful Baspa. The pastel pink of the freshly flowering Chilgoza pine, the azure blue sky dotted with the occasional wisp of white cloud and the mighty

In Raksham and Chitkul most local activities revolve around wood. Collecting, cutting, storing and building with wood. Houses function as places to dwell as well as go downs for dry wood and grass. This has led to accidents in the past, where an entire house has burnt down and was promptly rebuilt sometimes more than once in a year. The local Kinnauriâ€™s are very fire and environment conscious so do not throw or use plastic bags. On your walks you will find a lot of pine and fir acorns. Since the two towns are in a crucible of the Himalayas, the sunrises not before 9:00am and sets by 5:00pm everyday.

Legend has it that the â€˜Pandavâ€™ brothers of the epic Mahabharata spent several years of their exile here. A quaint mix of Hinduism (Shiva temples) co exists with the more recent Buddhism. The kinners of Kinnaur have been labeled halfway between men and God by our ancient texts. Incidentally Tibetan Buddhists worship Mount Kailash, the abode of Lord Shiva, with perhaps more fervor than we do. Further, Spitiâ€™s Ki Monastery and a monastery on the banks of Mansrovar in Tibet have trishuls adorning their terrace.

The bus/ jeep that you take to Chitkul stops at the bus stand and promptly hurries back to Raksham and then Sangla. Chitkul has a PWD Bungalow, but you will be better served befriending the locals, who happily rent out their homes to you. The dwellings are built in a mix of Doric style with functional interiors and high lofts for storing wood and grass. Each room will have continuous water supply outside the room. The tap is kept permanently open or else the water may freeze inside the pipes and damage it.

The Chitkul villagers have a council that meets in the temple courtyard once a week or more often if the need arises.

The school is slightly further away abutting the riverbank on one side. Since a landslide had destroyed a classroom all classes are held in the four corners of the playground.

Solar electricity is available till lights out is announced and for those fond of watching T.V. or listening to the radio there is obviously no coverage. If you like listening to the soothing sound of a mountain stream pass through centuries of old rounded rocks, this is the place for you!

The Army keeps a watchful eye on the town without interfering with the day to day working of the town. These places beckon you to partake in its beauty. The sooner you reach there the better!

With kind courtesy of eSamskriti, check more photos on eSamskriti