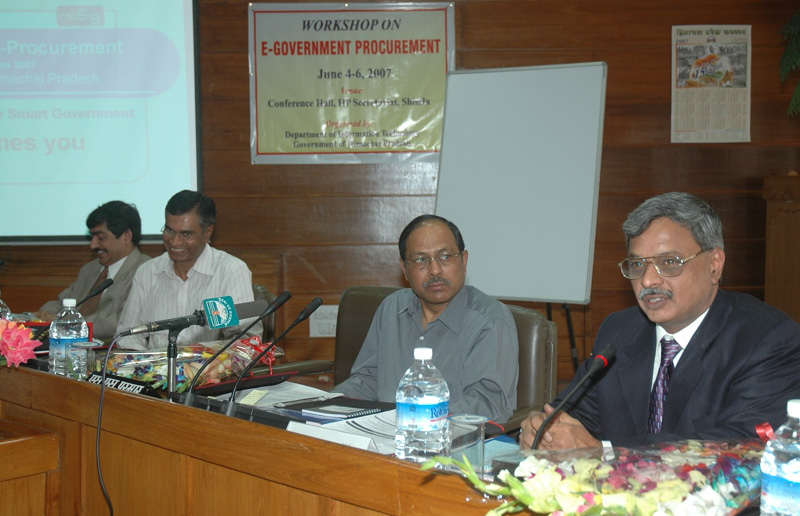 Shimla: Himachal Pradesh has made significant strides in the field of e-governance and has emerged as one of the leading computerized States in the country. It was stated by S.S. Parmar, Chief Secretary in his inaugural address at a three- day long workshop on e-government procurement organized by National Institute of Smart Government here today.

Chief Secretary said that all developed nations now regarded developing e-government as a key strategy for ensuring success in the 21st century and as a result the spectacular rise in the use of Information Technology around the world has initiated this process.

Parmar informed that in the State the projects like Himbhoomi, Himris, e-Praman, Refnic, Sarthi, Vahan, Treasuries Computerization, Integrated Community Service Centres etc. were aimed not only at computerisation of existing processes and systems but also their re-engineering to improve the service delivery and enhance transparency in the government functioning.

Underlining the significance of e-procurement, Chief Secretary stated that Electronic Government Procurement (E-GP) is one of the most important areas of e-government programme and has great potential to substantially increase efficiency, effectiveness and transparency of government procurement as well as enhance, various other government objectives. It was also a great step to ensure that government procurements become simplified, transparent and result-oriented, he added.

Chief Secretary further said that Himachal Pradesh was recognized throughout the country for high-level of transparency and accountability in Governance. He said that the Government of Himachal Pradesh is committed to provide a transparent, responsive and clean administration to the people. In furtherance of this as a principal objective, the Government had set a goal of ushering in a e-Procurement in different departments and government agencies due to its inherent advantages in terms of cost savings, transparency, mitigation of delays, ensuring fair, free and fearless participation of beneficiaries like tenderers, bidders besides facilitating monitoring of progress of works awarded.

Parmar also informed that the State Government was fully committed to implement e-Procurement in various departments and organizations doing major procurements such as Controller of Stores, PWD, I&PH, Forest, Food and Civil Supplies, Health, Education, HPSEB, HRTC, Animal Husbandry etc. He called upon the Stateâ€™s IT Department to come forward with an initiative for short-listing solutions and finalizing a precise plan for implementing e-Procurement in the State.

Earlier, welcoming the Chief Guest and as many as 50 senior level officers drawn from different departments, Corporations and Boards of the State, Sanjeev Gupta, Secretary, Department of Information Technology said that Himachal Pradesh had already taken a lead in establishing various Mission Mode Projects (MMP) in the field of IT and the State Government would further ensure adaptation of e-procurement in different departments within the time frame stipulated by Government of India.

Satyanarayana, Chief Executive Officer of NISG also addressed the participants and delivered a detailed presentation on e-procurement and deliberations to be made during the 3-day-long workshop which would conclude on 6th June, 2007.