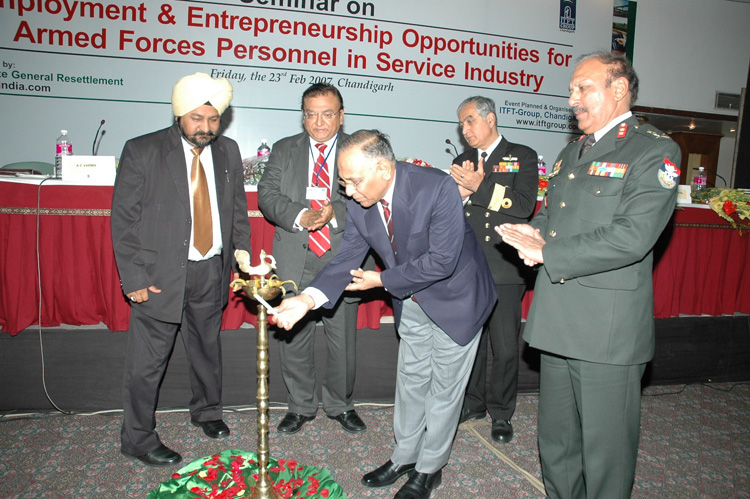 V.S. Kokje, Governor has stressed upon the need to create more job opportunities for ex-servicemen in growing segment of service so that the rehabilitation of the personnel could play a role of â€˜motivatorâ€™ for young generation to join Defence Services as their career. He said that Armed Forces personnel were well qualified and highly disciplined and there was a need to exploit talent in the larger interest of the country.

Governor was addressing the delegates in a National-level seminar on â€œEmployment and Entrepreneurship opportunities for Armed Forces personnel in service industryâ€ at Chandigarh today. The seminar was organized by ITFT Group, Chandigarh and Directorate of General Resettlement, Ministry of Defence with the main objective of harvesting the talent that comes out from Armed Forces.

Kokje said that Armed Forces had been consistently performing as â€˜Guardians of Safetyâ€™ and always ready to make sacrifices to preserve freedom and sovereignty of the country. He said that these personnel were endowed with stellar qualities and varied talents, which could contribute to development and nation building. He said that it was also our joint responsibility to look after the welfare of ex-servicemen and their families.

Expressing his satisfaction over the overall scenario of rehabilitation of ex-servicemen in the country, Governor said that a new Department of Ex-servicemen Welfare has been created in the Ministry of Defence to give focused attention for welfare programmes for ex-servicemen. He said that several of the State Governments including Himachal Pradesh had also taken the initiative to recruit this immense talent in different departments and said that the corporate sector had also been taking keen interest in the multi-faceted large human resource.

Emphasizing the need to start training programmes for retiring Armed Forces Personnel, Governor said that such steps could go a long way in providing new job opportunities in coming up professions of high profile. He also appreciated the efforts of Directorate General of Resettlement, Ministry of Defence for initiating various courses to train personnel in almost all spheres of service.

Appreciating the efforts of ITFT Group, Chandigarh in organizing such an important interactive seminar of National-level with the help of Directorate General of Resettlement, Governor said that such events would go a long way in projecting the talents of Armed Forces Personnel and said that corporate world would also be benefited from this seminar.

General B.S. Thakur, former Vice-Chief of Army Staff and Chairman, H.P. Public Service Commission said that Himachal Pradesh has a history of valour sacrifices and contribution in defence services and the State Government has started various effective steps for the welfare of ex-servicemen and their families. He said that there was also a need to look -after the welfare of war widows and widows of personnel particularly in Himachal Pradesh.

Major General Harwant Krishan, Director General Resettlement in his presentation detailed out the various steps taken for training of the personnel in different sectors. He said that year 2007 has been declared as the â€˜Year of placement for ESMâ€™ and said that the industry, the Department of Ex-Servicemenâ€™s Welfare and the Directorate General Resettlement would work together to achieve the desire results.