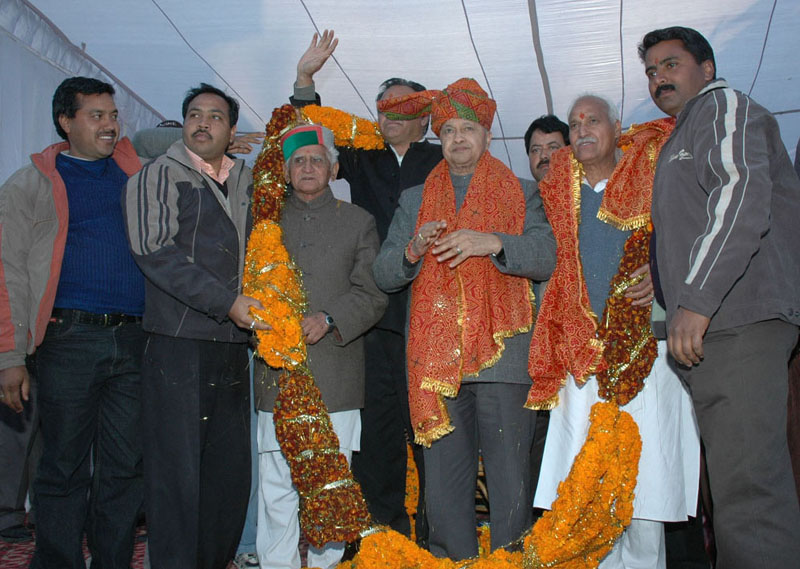 Shri Virbhadra Singh, Chief Minister said that Badoh area would be developed as a tourist destination and Rs. 50 lakh spent over the same. He said that State Government would provide financial grant to the degree colleges being operated in private sector to meet their financial liabilities as they were supplementing the endeavour of the State Government in providing higher education to students of Changer area. He was addressing in a public meeting at Sarotri in Changer area of Nagrota Bagwan assembly segment of Kangra district on the second day of his winter sojourn. He also laid the foundation stone of an ITI building at Sarotri to be constructed at a cost of Rs. 7.30 crore where training in 10 different vocational trades would be imparted in a phased manner. Â· C.M. laid foundation stone of ITI at Sarotri to be constructed at a cost of Rs. 7.30 crore. Â· C.M. dedicated Sera Thana Augmented Water Supply Scheme completed at cost of Rs. 2.82 crore. Â· Rs. 54 crore being spent annually on social security pension. Chief Minister said that State Government was identifying unexplored tourist destinations to develop them in a planned manner and added that Badoh was one such unexplored destination which had potential for tourism promotion activities. Government was making its endeavour to develop it for attracting tourists besides generating employment avenues to local people, he added. He further said that Government was generating vast employment avenues in Government and private sector as process to recruit anganwari workers in sanctioned new 11000 anganwari centres was in progress. He said that recruitment boards had been directed to exercise their powers by maintaining neutrality and added that about 22000 rural women would be provided employment. He said that candidates who fulfil the minimum eligibility criteria and belong to the poor families and have none of their family member in government and semi-government service would be given priority so that atleast one family member was provided employment as per the policy of the Government. He said that more lower-level employment avenues were being created in educational and health institutions. Chief Minister said that the living standard of the people of the State was much better as compared to other States in the country and added that there was hardly any family which had no food and shelter. He said that focus of all the polices and programmes of the successive Congress Governments at the Centre and State had been the welfare of commonman and they have launched a crusade to eradicate poverty. He said that a number of poverty alleviation programmes launched to benefit the people have yielded positive outcome and every family was getting enough income to make both ends meet. Shri Virbhadra Singh said that social welfare sector had been accorded top- priority and 48 percent of the budget allocation earmarked for the same while there were no constraints for funds in extending social security cover to every eligible person. He said that 2,12,250 aged, widow and handicapped persons were getting social security pension and added that State Government was spending Rs. 54 crore annually on the social security pension. Chief Minister said that the areas of Punjab which were merged in Himachal in 1966 were the most backward areas of Punjab and had cultural and social affinity with the old Himachal area and concerted efforts were made for their development thereafter. He said that credit goes to the hard working, honest and simple people who strived hard under the able guidance of successive Congress leaders at Centre and State. He said that development took place at accelerated pace after 1966 and the merged areas had become most progressive and developed in all respects. Chief Minister announced construction of three additional rooms for Government High School, Badoh with boundary wall, five hand pumps for the Changer area and added that spots would be identified by the local MLA. He also announced Rs. 15,000 to the school children for promotion of cultural activities. Earlier, Chief Minister dedicated Sera Thana Augmented Water Supply Scheme completed at a cost of Rs. 2.82 crore for 33 villages covering a population of about 31,000 persons