The focus of my recent work in India has been on the natural environment in the remote area of the Upper Banjar Valley where my Indian wife and I live half the year. Here, above our village of Ghiyagi, are very old deodar forests fed by the unique microclimate of the region, with its abundant rainfall, and the constant flow of the Hirub and Jibhi nullahs/streams. As with so much of the greater Kullu Valley, it is a region permeated with natural beauty and mythic consciousness, so uniquely expressed in the Devi/Devta culture found in the Valley of the Gods. The work exhibited is from two different series: Hirub Suite (including Hirub Flow, Turbulent Flow, Night Pools) and Monsoon Mists. 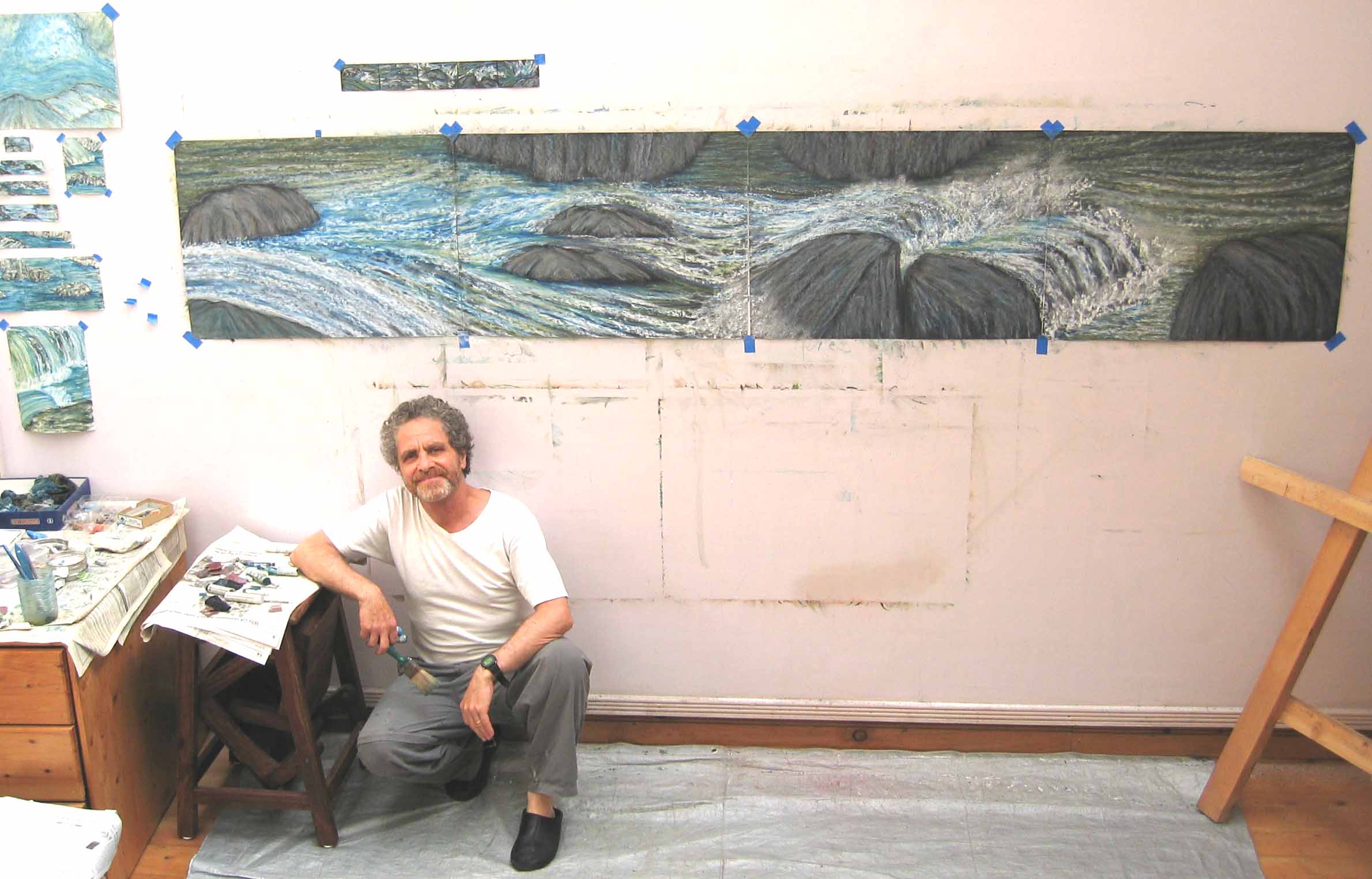 The works exhibited center on the Hirub & Jibhi nullahs which are part of the Tirthan River catchments and are a continuation of my preoccupation with energy flows going back over thirty years. They not only reflect the deeper, mysterious movements and levels in Nature, but also the larger spiritual dimension that embraces us all. I am trained both as an Earth scientist and an artist and deeply appreciate the patterns of Nature and have worked in many area of our planet (from Alaska to Antarctica). My kismut has brought my wife and me to the Kullu Valley where we now live. Since 2000, I have also been an advisor to the Great Himalayan National Park and the NGO, SAHARA, on many issues of nature conservation and sustainable livelihoods. I have trekked over 1,200 km in the Park and gone to all its four river sources (Parvarti, Sanij, Jiwanal, Tirthan) high in the glacial regions, adding to my work’s inspiration.

Nature’s beauty, reflected in its energy and patterns, is something we all appreciate on both conscious and subconscious levels. Yet as we move into the 21st Century, it is clear that human impacts on the environment continue to have momentous and adverse results. Global warming is a reality with recent satellite studies by NASA indicate the world is reaching its highest temperatures in the last one million years! It is clear that polar and glacial regions of the planet, including the Himalayas, are melting at unprecedented rates.

For those living in Himachal Pradesh there are great challenges ahead, especially as the state has had abundant water supplies based on the Himalayan snows and ice. As rivers are dammed, many rigorous questions need to be answered about the effects on the environment and the uncertain future of water replenishment in an age of global heating. In the end, the cost-benefits of hydels on both the environment and advantages to the people of HP need to be objectively analyzed. The Tirthan River is the only remaining one in the Kullu Valley that does not have any hydel projects. For the time being, the Tirthan River has been protected but not its tributaries like the Hirub and Jibhi streams. Without proper environmental analysis of development, the beauty of the Kullu Valley faces the prospect of increasingly being swallowed up by unplanned growth with pollution, congestion, and the loss of more of irreplaceable Nature.

I have been an admirer of Nicholas Roerich for many years having grown up in New York City where a gallery is devoted to his work. In some ways, he has inspired my life with its multi-dimensional character. Roerich’s love for the Kullu Valley and its people along with the majestic beauty of the Himalayas links me to him and his work. I dedicate this exhibit to the memory of his remarkable life and all those working to protect and preserve the unique beauty of the Kullu Valley.