The collaboration started in 2005 with doctors from Lady Willingdon Hospital (Manali, HP) continues in 2006 with efforts to bring improved health care to the Khadagarh Panchayat in the more remote Seraj Valley of Upper Banjar, Kullu District. This brief summary will give both a background and the first of periodic updates to our activities in 2006.

Lady Willingdon Hospital (LWH) working in collaboration with funding from Payson R. Stevens & Kamla Kapur, commenced an Immunisation and Community Health promotion project in 2005. At this time around 260 children were vaccinated for major childhood diseases including BCG, MMR, typhoid, and Hepatitis B in five villages of the Khadagarh panchayat (Jalora, Hirub, Sarthi, Ghiyagi, Jibhi). Donations were raised to continue the program in 2006 from Stevens and friends and the involvement of My Himachal (MHG), a non-profit group of Himachalis across the World. In 2006, the project will be rolled out to remaining villages in the Khadagarh panchayat and extended to include other child health public health interventions.

Objectives
To complete immunisation of all children in the Khadagarh panchayat including:
MMR (mumps, measles, rubella)
Hepatitis B
To provide de-worming and micronutrient supplementation with Vit A and Zinc to all children in this Panchayat â€“ via schools

To use the immunisation â€˜eventâ€™ as an opportunity for wider Health promotion using a â€œHealth Melaâ€ approach â€“ including demonstrations to enhance nutrition e.g. soy flour mixed in with attha for chapattis, a double carbohydrate chapatti, and a Super Porridge for pre-schoolers.

To work in collaboration with SAHARA to generate health promoting messages that can be transmitted through Kala Jatha at the time of village visits.
2006 TIME TABLE 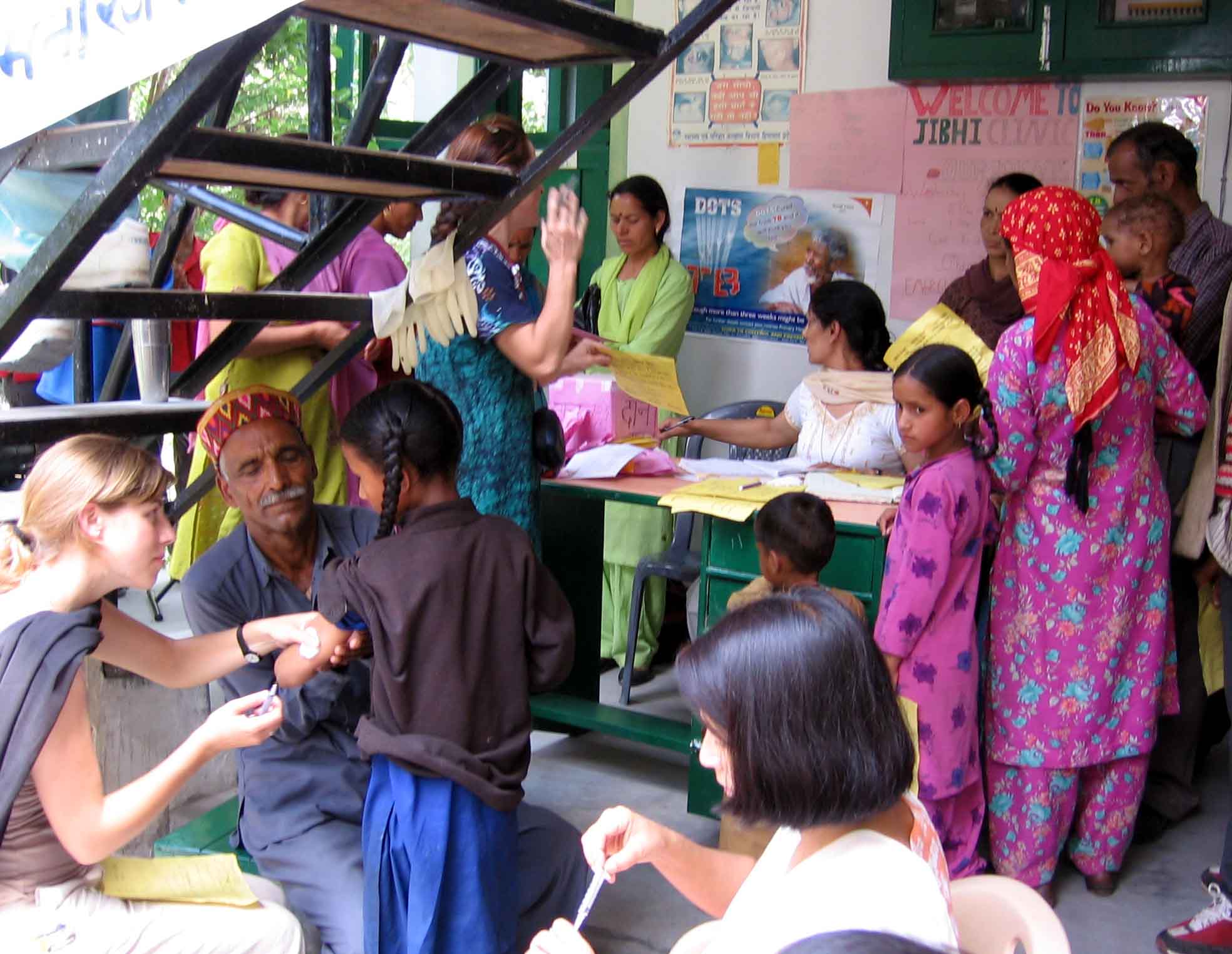 This was the most accessible of the events as the clinic is right off the paved road from Banjar State Highway #11. The clinic, by the banks of the Jibhi Nala, was decked out with posters, banners, and ribbons to celebrate the beginning of the Mela. Effective pre-mela publicity, including members of SAHARA going to surrounding villages and distribution of flyers drew many people from the surround villages, including: Sar, Cheunt, Khutachi, Rashala, Jibhi and Jarpur Jibhi with a total population of around 300.

We estimated 225-250 villagers participated during the full day. Live music was preformed throughout the day to add to the festivities, including myself playing a synthesizer accompanied by the tabla master, Durgaji, from Manali.

Heath Mela activities (which would be repeated in subsequent village visits) included immunizations, deworming, and Vitamin A and Zinc supplements. In addition, surveys of the children included weight, height, and dietary information (number of meals/day, type of food, etc.). The children were also given eye and dental checks. An NGO from Banjar set up a table and did AIDS awareness outreach.

SAHARAâ€™s Kala Jatha Group preformed skits, songs, and music based on health care themes. The skit showed an old man with a grandson who he loves very much. They live alone and there no one in the house to cook so the boy goes to school hungry every day. The boy faints from hunger in school and is taken to the Jibhi clinic. The doctor says the boy suffers from poor nutrition and explains what a good diet is. A lot of local humor and language had the audience laughing.

Nutrition Education and food product demonstration – with chapattis and pranthas made from a mix of soy bean flour with wheat â€˜attaâ€™ as well as a weaning food â€˜sattuâ€™ made from a mix of flours and milk. Children and mothers enjoyed talking about these foods and tasting them.
Solar Cooker Demonstration
Worm treatment (all children)
Vit A supplementation (all children)n
Zn supplementation (children with stunting and malnutrition or recent diarrhoeal espisode)
Medical Observations:

Solhanu village is a steep 500 vertical metre climb from Jibhi junction. The climb passes through another village and then wonderfully cool deodar cedars. The village children ran down to meet us as we arrived rather hot and sweaty from our climb. Looking over the steep forested hills, this village is kept very clean and tidy. We set-up in a sunken courtyard allowing onlookers to perch all around the edges. Neighboring village Khunn also arrived in force with mothers and children.

After vaccinating, weighing, measuring and drinking worm medicine the children loved the games organized by the SAHARA group â€“ prizes of toothpaste or toothbrushes were much appreciated. The weather was hot but a cool breeze and shade from the verandahâ€™s above kept us and more importantly the vaccines cool. The women at Solhanu were not so keen to try the soy pranthas and sathu but the children and babies were very happy to be handed out a sample portion. They were fascinated by the lightweight Primus trekking stove we cooked on too!

We counted over 100 people watching the street/ village theatre and all laughing heartily! We were welcomed to a hearty rice and dhal lunch with a village leader â€“ as we talked he commented â€“â€œWe are so happy to have you in our village. This is the first time any group has come to our village to bring us health care. Most people think its too big a climb and donâ€™t come. Please come back again.â€ We certainly will come again.

Number of children vaccinated: 39 (of a total of 43 children in the two villages)

As above in Jibhi â€“
Observations: Nutrition/Malnutrition assessment, De-worming, Zinc and Vitamin A supplementation, dietary assessment, eye clinic, nutritional display and teaching and the ever popular street theatre but the large solar cooker was left behind! 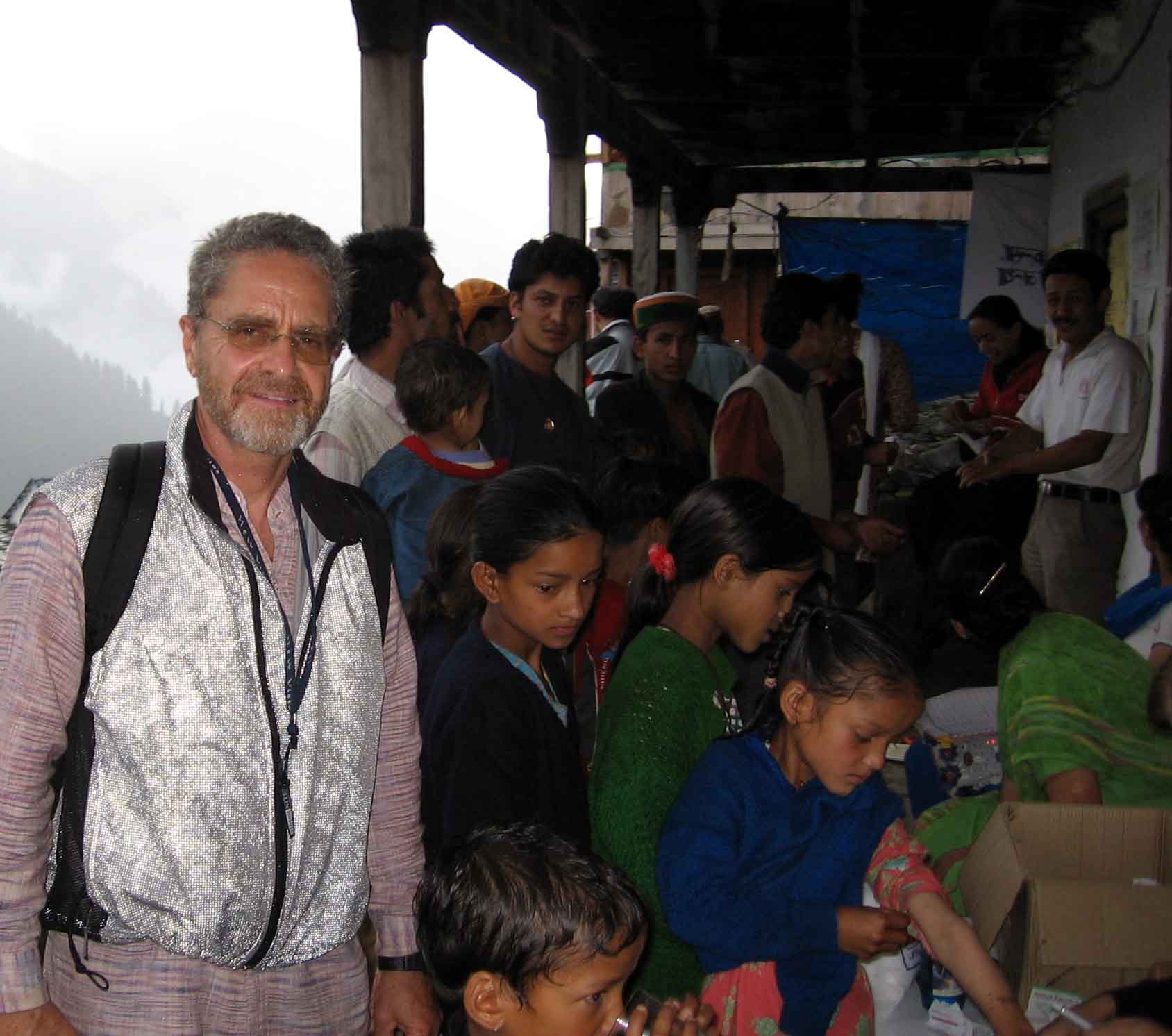 Shoja village is perched on terraced hillside overlooking the Seraj Valley with views of the mid-Range Himalayas and off the main road (State Hwy 11) at a height of over 8700 feet. Itâ€™s on the road to the well known, Jalori Pass at over 10,200 feet. Shoja is typical of Kullu Valley villages and architecture. Houses have slate pitched roofs; the ground floor is often occupied by cows, sheep, or goats. The middle level is for animal fodder and the top level for dwelling. Houses are made of local stone and deodar wood framing with open verandahs.

It was a rainy day as the Monsoon had just begun in our region. We set up in a large home generously donated by Mr. B.S Rana. It had wrap-around verandahs where the activities took place and in a few of the rooms. Even though the weather was bad, many children and parents showed up from the village to participate in the health care activities, which were offered. The village has a population of around 150 adults and 40 children and about 90% showed up. 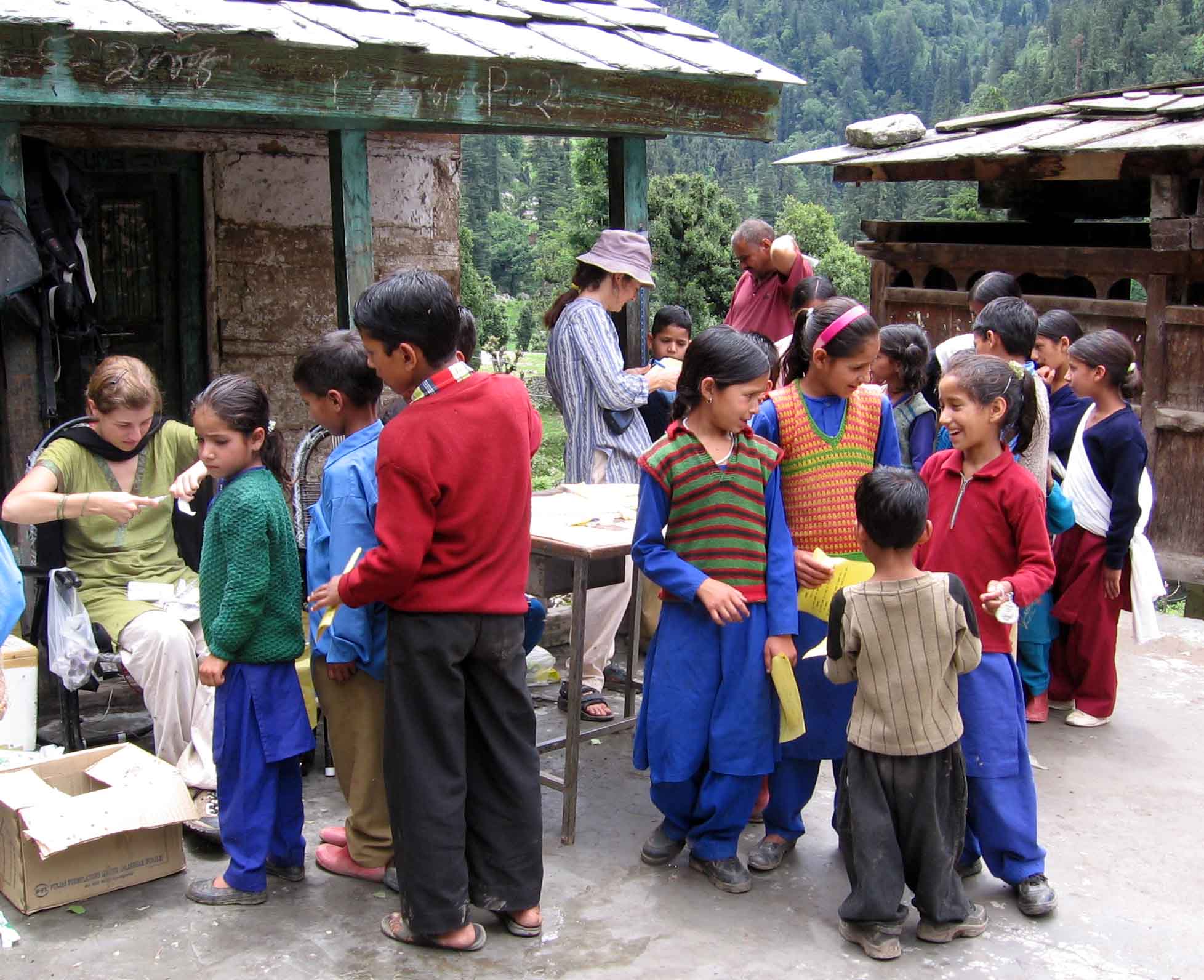 It was a sunny day as we hiked five km up from Ghiyagi village off the road. The village of Hirub is also perched on a series of terraced ledges at an elevation of around 8500 feet. The village has a population of around 150. A nearby very poor village, Kulwada, was also included in the mela. We set up in the mandir ground, the small plaza in front of the temple. This beautifully and colorfully decorated mandir/temple, called Panch Veer, is dedicated to the Five Brothers from the classic Indian epic, The Mahabharata.

Hirub homes overlooked the plaza and many villagers watched the Mela from their verandahs. Some of the older women were in traditional Kullu style dresses, called pattu with ornately woven designs. Different areas of the plaza were set up for the examinations and demonstrations. The Kala Jhata troop set up right in front of the mandir and drew more villagers in with their songs and skits. 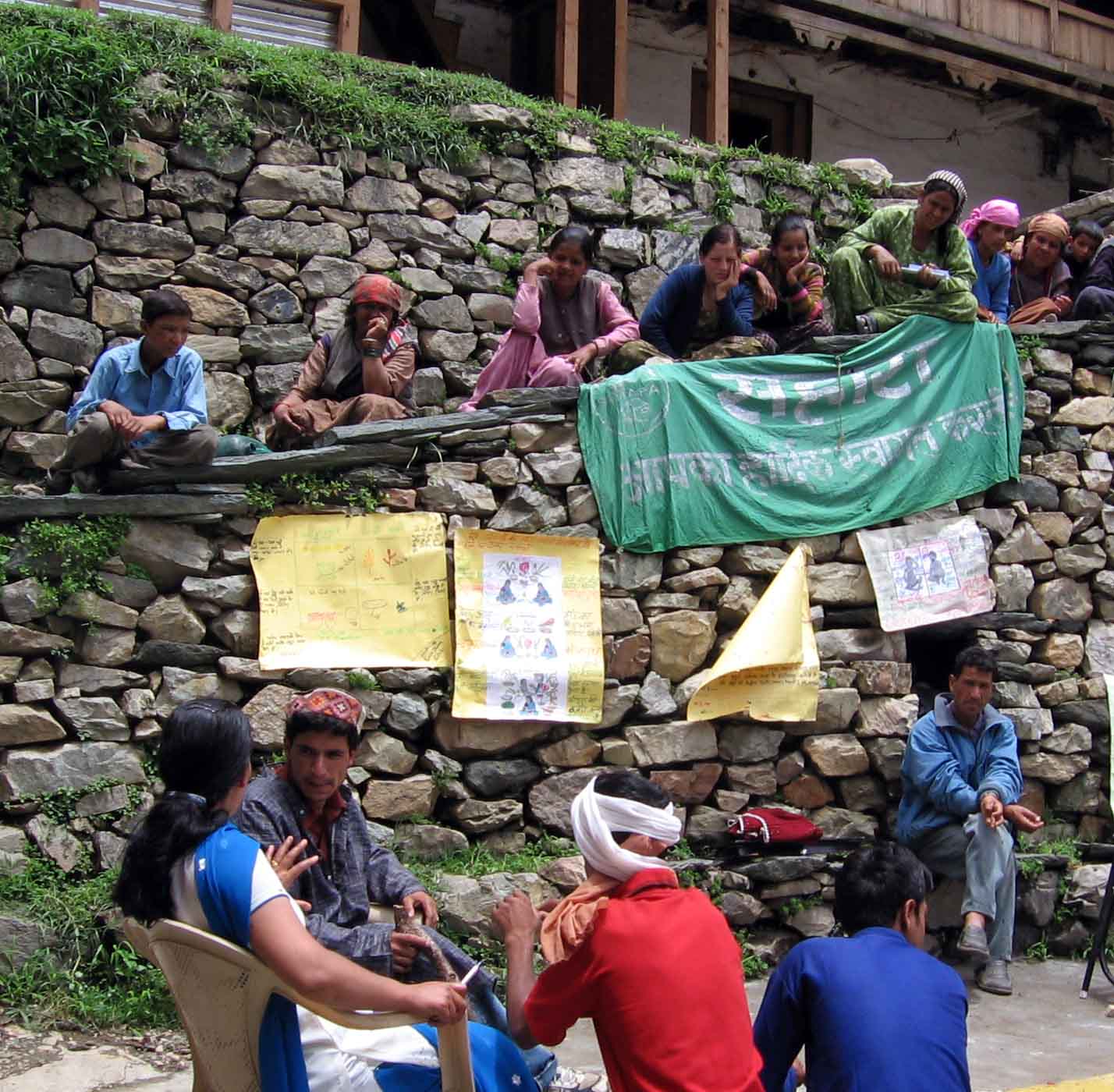 providing vaccinating any children who were missed last year along with the mela demonstrations.

Ghiyagi, a more prosperous village right on Hwy 11, was also part of our 2005 project. It is one of the older villages, possibly over 500 years old, in the Valley. Ghiyagi is important as the home of the devta, Shringa Rishi, one of the most important devtas in the Kullu Valley. We set up in the mandir plaza and follow-up exams and immunizations were carried out. A number of newborn babies who hadnâ€™t been immunized last year also came.

Proforma/surveys of the childrenâ€™s height, weight, and daily diet were done by LWH staff. Based on the surveys, Drs. Kaaren & Jeph Mathias, observed that the children in all the villages were suffering from fairly severe malnutrition. The village range was anywhere between 70-80+ % under the 5th percentile for weight and height for India norms. Many children had only one meal a day (often just two dry rotis) and protein was not a regular part of their diets. This lack of adequate nutrition was reflected in the stunted growth of many of the children and all the problems that poor diet present. These complications include increased susceptibility to infection, negative impacts on neurological development during early years, and educational/mental developmental problems. A hungry and/or sick child is not going to be alert and benefit from his/her education.

The Health Mela will continue on July 20,21 with our team going to Sejwaar village, a three-hour hike from the road at an elevation of 9,000 ft. Sejwaar in one of the larger rural mountain villages with a population over 300. By hiking up to the villages we know that we will be able to reach more childrenâ€”they told us that last year.