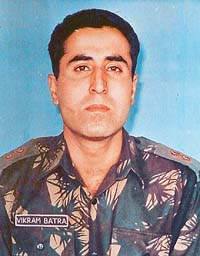 Twin sons were born to the family of Mr. G.L. Batra and Mrs. Jai Kamal Batra, on 09 September 1974 at Mandi, Himachal Pradesh. The family had two daughters earlier and twin sons were a joyful addition to the family. The family nicknamed the twins as ‘Luv’ (Vikram) and ‘Kush’ (Vishal). Luv received his primary education from his mother, who herself is a teacher. He received his education up to Middle Standard in D.A.V. Public School, Palampur and up to senior secondary stage in Central School, Palampur. Both his sisters are married and his twin-brother, Kush, is undergoing an internship training course as a Junior Executive with Tata Finance Ltd. Captain Vikram Batra was very brilliant, diligent, and active from the very beginning of his student life. He was very popular among his friends, students and teachers since, he was ever smiling and respectful to everyone.

He was also selected for the 1994 Republic Day Parade at New Delhi. During his B.Sc. course in 1995, he got selected for the Merchant Navy in a foreign-based company (Hong Kong).However in the nick of time he dropped the idea of joining the Merchant Navy due to his patriotic zeal to serve the Nation. As a true son and soldier of the motherland, he decided to join the Indian Army as a Commissioned Officer. He got commissioned in June 1996 and he joined the IMA (Indian Military Academy) at Dehra Dun. After passing out in December 1997, he joined the Army as a Lieutenant of 13 JAK Rifles at Sopore, Jammu & Kashmir. Later he was sent for the Young Officer’s Course at the Infantry School in Mhow, Madhya Pradesh where he secured Alpha grading for his overall performance.

Next, he attended a 35-day commando course at Belgaum, Karnataka in February-March 1999 where upon completion of the course, he was placed in Instructor’s Grade.Reconnaissance for the capture of Point 5140. Sitting Left to Right: Lieutenant Vikram Batra, Major Vikas Vohra, Captain Chatterji and the CO of 13 JAK Rifles, Lieutenant Colonel Y.K. Joshi.Lt. Col. Y.K. Joshi, adding the third pip on Lieutenant Vikram Batra on his promotion to Captain after the battle for Point 5140. He was to win a posthumous PVC some days later in the battle for Point 4875.On 01 June 1999, his unit proceeded to the Kargil Sector on the eruption of a war-like situation in Kargil, Drass and Batalik sub-sectors from where he was sent along with his company on the first strategic and daring operation to recapture the first peak of utmost importance – Point 5140, which was at an altitude of 17,000 feet. Upon reaching Point 5140, leading a company of troops, he encountered the commander of the Pakistani-backed terrorists on radio. The enemy commander challenged him by saying, “Why have you come Shershah (his nick name), you will not go back.”

Captain Batra, being the last person to back away from a fight, replied, “We shall see within one hour, who remains on the top.” In a short while Captain Batra and his company of troops killed eight enemy soldiers and more importantly captured a heavy anti-aircraft machine gun, neutralising the advantageous peak. Re-capture of Point 5140 paved the way to the return of the rest of peaks and cleared the Srinagar-Leh highway which sat in motion of successes like capturing Point 5100, 4700 Junction, Three Pimples and the ultimate prize – Tiger Hill. After the capture of Point 5140, standing left to right: Captain Jamwal, Lt. Col. Y.K. Joshi, Captain Vikram Batra and Major Vikas Vohra. Sitting Left to Right: Major Gurpreet Singh and Captain Rajesh Adhau, the RMO. Soon after capturing Point 5140, he radioed his commanding officer and said jubilantly,”Yeh Dil Mange More!”

On the successful capture of the vital peak he was congratulated and graced by the Chief of Army Staff, General Ved Prakash Malik on telephone. After taking rest for 4 – 5 days he proceeded towards Point 4750, where he was challenged again by the enemy who said, “Shershah, nobody shall be left to lift your dead bodies,” to which Captain Batra curtly replied, “Don’t worry about us, Pray for your safety.” He captured Point 4750 and hoisted the national flag. He also played a commendable role in the capture of Tiger Hill. He had dedicated himself and was determined for total victory.On ‘Ledge’ overlooking the 17 Jat objective of ‘Whale Back’ and their approach. An enemy snow-hut is in the background. Captain Vikram Batra was killed here, winning the Param Vir Chakra (PVC).He volunteered himself for a third crucial operation of Point 4875 at an altitude of 17,000 feet, with a gradient of 80Âº. He attacked the peak along with his company and another led by Captain Anuj Nayyar, MVC. They gave the enemy a tough time, killed a number of enemy troops and re-captured the peak on 05 July 1999. The enemy counter-attacked the peak on 07 July 1999, but Captain Batra retaliated the counter-attack with vigour.In the heat of the battle, one of his junior officers (Lieutenant Naveen) was seriously injured and Captain Batra immediately went to his rescue. Destiny however had something else in store for Captain Batra and during the rescue, he was hit by a bullet in the chest. With the words Jai Mata Di on his lips, the brave Captain fell down and was hit again in the waist by an artillery splinter. Before succumbing to his grievous injuries, this brave son of the motherland and a true lion of Bharat Mata killed another five enemy soldiers. A grateful nation applauds the Batra family. He fought with exceptional bravery and magnitude, which is rarely seen. He has set an example before the youth of our nation, which shall inspire generations to come.

In recognition of his gallant act, Point 4875 has now been renamed as Captain Vikram Batra Top and has received all credit to capturing this vital peak by his Commanding Officer, Colonel Y.K. Joshi, 13 JAK Rifles. For his sustained display of the most conspicuous personal bravery and junior leadership of the highest order in the face of the enemy, Captain Vikram Batra was awarded the Param Vir Chakra, India’s highest medal for gallantry, posthumously. His father, Mr. G.L. Batra, received the award from the President of India, on behalf of his brave son.