Mr. Modi predictably positioned himself as a son of Himachal, drawing on his stint as Himachal in-charge for the BJP during his salad days. But here he has come up against the daughter of Himachal- Priyanka Gandhi- who has a more valid claim since she actually has a house in Charabra, near Kufri.

Last month the editor of a leading newspaper asked me to do a piece on the elections in Himachal and the prospects of the various parties. I politely declined, and with good reason- when it comes to elections I am an inveterate loser. I never get my analysis/ predictions right, and I am pretty consistent at this failure. I have voted in every election, including my RWA elections where a Donald Trump type always wins, and I have got it wrong every time: the chap I vote for invariably loses, and the guy who wins loses no time in conning those who voted for him. Which, I suppose, sums up our democracy succinctly.

But though I have given up predicting outcomes, leaving it to those who make a good living by conning the unsuspecting voter, I continue to follow developments and observe the low life, in the manner of the superannuated barn owl who sees everything but doesn’t give a hoot anymore. And since, to quote Oscar Wilde, the only thing to do with unsolicited advice is to pass it on, I’ll share some of these with those who have made the fatal mistake of logging on to my blog.

Tell me, folks, aren’t you sick of those stock photos after every polling day, the ones showing various VIPs showing off their finger with the indelible ink stain on it? They may intend to show that they had cast (caste?) their vote, but to me it always looks like they are giving the finger to someone. It’s a good thing that our rules mandate the forefinger for inking, and not the middle finger which is universally regarded as the sign of the crossed (no religious innuendo here, trust me). But a finger is a finger of speech, as it were, and I can’t help but wonder to whom are these guys giving the finger- the government, the opposition candidate, the rebels, the party President? I personally feel it’s the voter, who is in the position of the proctologist’s patient and better get used to it.

On a more serious note, I am afraid (but not surprised) that the Supreme Court has let us down again, on two counts. It has kept mum on the govt’s brazen opening of a window for donations to the Electoral Bonds scheme on the 7th of November, just before the elections to Himachal and Gujarat, in a departure from the notified scheme. It has also, by a happy(for the BJP) coincidence kept the next date for hearing on the Electoral Bonds case as the 6th of December, one day after the Gujarat polling. Surely it should have intervened and stayed the opening of this window since the matter was sub-judice? It is also a violation of the Model Code of Conduct but it appears that the Election Commission has also buried its head in the saffron coloured sands of Kutch. No points for guessing who’s showing the finger to whom on this one.

The second issue on which one is disappointed with the Supreme Court is its judgment of 7th November, 2022, clearing the govt’s amendment for reservation for the Economically Weaker Sections from the “forward” castes. This has provided another arrow in the BJP’s quiver to further target and win over the forward castes in the elections to the two states. Could the Court not have waited for another month, considering that the case was pending since 2019? If the Electoral Bonds case could have been deferred till after the polling, surely this EWS order could also have been similarly deferred. The so called “level playing field” is beginning to look more and more like the foothills of the Himalayas, where, don’t forget, our venerable Prime Minister spent much of his formative years. He knows how to take advantage of the terrain. 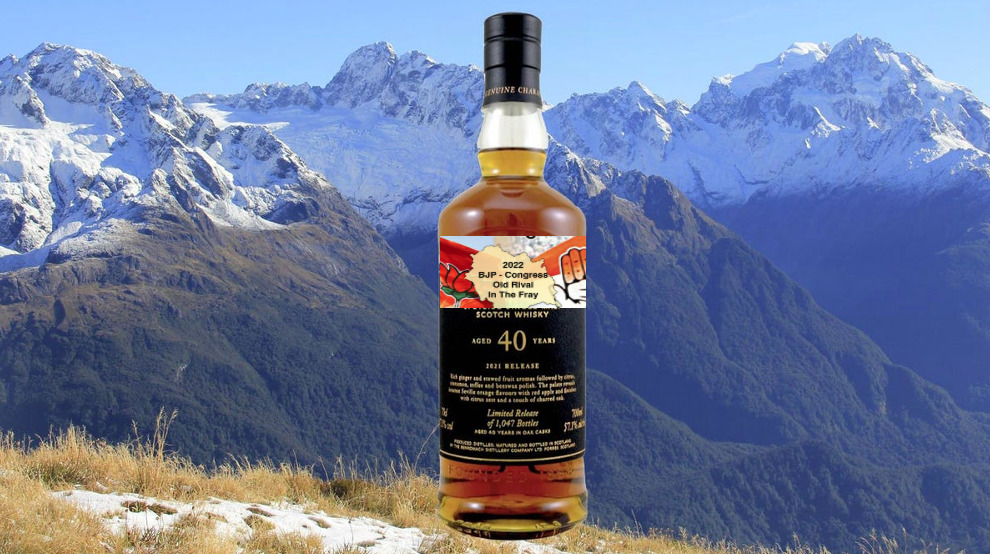 Coming to my own state of Himachal, it appears that the BJP launched its campaign with the familiar Hindutva artillery barrage of Uniform Civil Code, National Population Register, Triple Talaq and the Ram mandir, but quickly realised that this was not getting much traction. And not without reason: Himachal is the second most literate state in the country and its citizens are not the gullible fodder of the cow belt. Which is why, like Kerala ( the most literate state), Himachalis sensibly change their govt. every five years. Secondly, though they are Hindus, yet they set more store by their local devtas and devis, who command absolute devotion. Institutional Hinduism takes a back seat here. Thirdly, Muslims comprise barely 2% of the state’s population so any attempt at polarisation is doomed to failure. No wonder the BJP quickly fell back on their default battle line- Mr. Modi himself.

Mr. Modi predictably positioned himself as a son of Himachal, drawing on his stint as Himachal in-charge for the BJP during his salad days. But here he has come up against the daughter of Himachal- Priyanka Gandhi- who has a more valid claim since she actually has a house in Charabra, near Kufri. It is nowhere as grand as the Rs. 300 crore house being built for Mr. Modi on the Central Vista in Delhi, but it is, after all, in Himachal, and a matter of some pride for these mountain folk. They will now decide who they prefer as a neighbour.

The BJP has tried its best to keep the focus of the election on national issues, whereas the Congress has played it close to the ground, reiterating local concerns and resentments: Old Pension Scheme, exploitation of apple growers by corporates, unemployment, Agniveers, persistent corruption, bureaucratic ineffectiveness as exemplified by the fact that the state has seen seven Chief Secretaries in five years. Mr. Modi’s frequent rallies were part of the plan to retain the national focus. Rahul Gandhi has been criticised for not campaigning in Himachal, but I feel this was a smart move. Had he confronted the Prime Minister in Himachal it would have become the old Modi-Rahul fight all over again, and these contests have never favoured the latter. It’s difficult to hit the target when you don’t have one to begin with.

One factor going for the Congress is the virtual exit of the Aam Aadmi Party from the hustings. The arrest of Mr. Stayendra Jain, the AAP in-charge for the state, may have actually helped the Congress because it is only after that that the AAP went cold on Himachal. This arrest may yet prove to have been a grave miscalculation on the part of the double- engine in Delhi because, had Mr. Kejriwal stayed the course, he would have hurt the Congress more than the BJP. It doesn’t always pay to be too clever by half.

The rebels are going to be a determining factor in many constituencies because, with its small constituencies, seats are won and lost in Himachal by tiny margins. In 2017, almost half the seats had victory margins of less than 5000 votes. Rebels, therefore, can influence the elections even if they garner just a couple of thousand votes. Here again the BJP is at a disadvantage: it has twice the number of rebels than the Congress does. It is an open secret that quite a few have the silent backing of Mr. Dhumal, the ex-C.M, who was denied a ticket ( along with many of his putative candidates) as part of the old tussle between him and Mr. Nadda. This is payback time for Mr. Dhumal and the internecine warfare may yet cost the BJP dearly. But a codicil: if the BJP rebels win this would not pose a problem for the party- they would be welcomed back into the fold before you could say Jai Shri Ram and would add to the BJP’s tally. But if they lose they would have ensured the defeat of the BJP in those constituencies as they would have taken away priceless votes in what will be a tight election. In that case the cry may well be: Good Bye Jai Ram!

A word of caution, however, for the Congress, in which the bugles already appear to be sounding for the Chief Minister tourney: if it does get a majority its margin must be at least 15 seats. Anything less and Mr. Shah will make short work of it with his grinder, washing machine and RO ( his reverse osmosis technique ensures that those who ooze out of one party quickly get absorbed in the BJP and live happily ever after).

We shall find out on the 8th of December which cry- Jai Shri Ram or Goodbye  Jai Ram- will resonate through the valleys of this beautiful and idyllic state. I have my own guess, but that is strictly between the bottle of Glenfiddich and me, folks. Let no one tell you that a single malt cannot talk.