The Brits have perpetrated more than their fair share of colonial atrocities in India. But we didn’t raise much of a stink about them at the time of our Independence, partly because most of us were not even born then, and partly because those who were, were illiterate. There was also no Whatsapp then to help us along or Kangana Runout to remind us. But now we know all about them: destruction of local industries, forced indigo and opium plantations, the Madras famine of 1876-78, the Bengal famine of 1943, the Jalianwala Bagh massacre, the Radcliffe line and partition of India, the millions jailed, tortured, shot, etc. But one has to admire their consistency, for they did exactly the same wherever else they went- South Africa, Kenya, Australia, New Zealand.

But I still have a sneaking admiration for them, and for one sole reason- the British invented the Queue, the single most civilised behavioral trait which distinguishes us from the great Apes. It’s the queue which enables millions of people to shop, board trains and buses, go to cinemas, get their work done in offices, catch planes, watch soccer and cricket, without murdering each other in a temple like stampede. The queue may even have saved more lives than the British snuffed out in their colonies!

Interestingly, the queue (the line, not just the word) originated with the introduction of the urban transport system in the cities of Britain, and became firmly embedded in its civic life with the rationing introduced during WW1. It has even contributed to science- there is now a Queuing Theory, the mathematical study of waiting lines, created by a Danish engineer, A K Erlang, a hundred years ago. Shopping malls, airlines and other corporates spend a lot of time and money figuring out the most efficient manner of queuing. This has led to many variations of the standard straight line and queuing behaviour – queue chunking, skip and slip, serpentine queue, accordion queue, Wilma queueing method (for airlines) etc.

We Indians of course have a very laissez faire attitude to queues, and consider it a waste of time, strictly for those without connections. Which is why I still remember my first taste of the British reverence for a queue. It happened in 1990, when I was posted as Private Secretary to Mr. I.K.Gujral, the External Affairs Minister. On a visit to the UK, our British Airlines flight landed at Heathrow about 45 minutes ahead of schedule; the Indian High Commissioner and the protocol staff had consequently not yet arrived to receive our party at the air-bridge, as was customary.

Mr. Gujral and I de-boarded as ordinary mortals and proceeded to the immigration hall, where there were long queues at each counter. Seating the Minister on a bench, diplomatic passports in hand, I skipped a queue, jumped a yellow line and inserted myself at the counter, manned by a rather large lady who was not looking her best at this time in the early morning. Thrusting the passports and immigration forms at her, I said, with an air of self importance: ” Madam, the Indian Minister of Foreign Affairs is sitting on that bench. Could you please stamp these passports?”

The lady looked at me like I was a bad smell that she wished would  go away.

” Sir,” she thundered,” would you please go to the back of this queue and wait your turn !”

” But he’s the Minister for Foreign Affairs of India…..” I stuttered.

Fortunately, by this time the High Commissioner had arrived with the British protocol staff and took matters into their hands. I managed to save my job and the large lady proved indisputably why Britain managed to rule half the world for such a long time: the first rule in “Rule Britannia” was to stand in line. 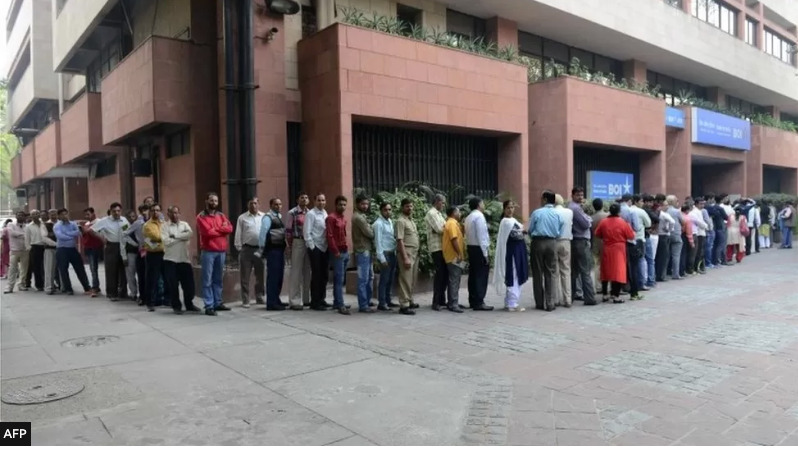 Most of my younger years were spent in standing in various queues: the ration shop, the railway booking office, the post office, cinema ticket counters, the electricity bill office, college admission counters. Even as an adult I grew a beard while standing in lines to buy my liquor, deposit my Income Tax returns, make an STD call to my parents in Kanpur. And these queues were nothing like the ones at Wimbledon or the Queen’s funeral recently; they were more like the scrummage lines in a Rugby match, all shoulders and shoving, no quarter given.

These days the digital revolution has changed most of that, and the only queues we land up in are the ones on the phone where a disembodied voice from Customer Service tells you: ” All our executives are currently busy on other calls. Please stay on the line. Your custom is important to us.” This is repeated ad-nauseam for about fifteen minutes, but at least one is sitting in the comfort of one’s home, not being pounded on the midriff by the guy behind or elbowed in the face by the chappie in front. For a brief time in 2016 Mr. Modi, who as we know values tradition before anything else, attempted to take us back to the not-so-good old days when he forced about 150 million people to stand in the demonetisation queues before banks and ATMs every day for a month. Fortunately, he had bungled up as usual, within a short time the crooks had exchanged their old notes for new ones, and life returned to normal. As they say in Italy- Queue Sara Sara.

The latest queues, post the death of Queen Elizabeth II, consist of former colonies of Britain seeking reparations and the return of their stolen artifacts in the British Museum which, according to John Oliver, is an active crime scene. India is also in line, demanding the return of the Kohinoor diamond.  The Kohinoor, as we all know, was forcibly wrested as a “gift” from Maharajah Duleep Singh, the younger son of Ranjit Singh and the last ruler of Punjab. He was only fifteen years old at the time. This was daylight robbery and we are certainly entitled to demand its return.

But why is our outrage limited to the diamond ? Why are we not retrospectively indignant at the treatment meted out to the young Maharajah- separated from his mother, forcibly taken away to Britain and never allowed to return to Punjab, allowed to visit Nepal only once in his lifetime when his mother died. He himself died a lonely death in a hotel in Paris, a penniless pauper, and was buried in the small village of  Elveden in the Suffolk countryside as a Christian- the son and rightful heir of perhaps the only Indian ruler who made the British eat humble pie ?

Why are we interested only in Duleep Singh’s baubles and not the man himself ? Why has the Indian govt. not demanded back the remains of the last ruler of Punjab, so that he can finally be laid to rest in the land of his birth and his ancestors? Most surprising, why have the government and the proud people of Punjab, so conscious of their history and sacrifices, not raised this demand yet? The only feeble effort made so far has been by a Sikh charity, The Maharajah Duleep Singh Centenary Trust, but it has not been supported by either the Indian or the Punjab governments. The Kohinoor is, after all, an inanimate trinket but Duleep Singh is part of our lived history, and if we fail to remember him we betray and disown our own past. Looks like we are in the wrong queue on this one.