The year 2020, according to the Chinese zodiac, was the Year of the Rat; it actually turned out to be the year of the Bat, but that’s another story. In India it was the year of the Rat- race, and the race is nearing the finish line in 2021. The participants are all our constitutional bodies, vying with each other to be crowned King Rat. Little do they realise that the winner of a rat race continues to be a rat. It’s a relay race to the bottom, and the devil take the hindmost. The two front runners are the Supreme Court and the ECI ( Election Commission of India). The others- CBI, ED, NIA, Income Tax Deptt., NCB- did not have to take part in this race; with their impeccable credentials they have been given a bye and are already at the bottom of the pit.

The Supreme Court has led the relay for most of the time since 2014, with its indifference to the enforcement of fundamental rights, the citizens’ liberty and the executive’s accountability. Its pusillanimity has been one reason why we are being continuously downgraded as a democracy by international watchdogs, whether or not Mr. Jaishanker cares to listen to their barking. And the court has just got closer to the finish line by its shocking decision to hear a petition against the Places of Worship Act 1991, less than two years after it had ( in the Ram Mandir case) reaffirmed the Act as a  bulwark against ” retrogression”, and called it a part of the basic structure of secularism and hence of the Constitution. Its strange decision to re-open the matter has, quite naturally, emboldened a Varanasi court to order the ASI to find out whether Gyan Vyapi mosque and the one in Mathura have been built over the ruins of Hindu temples. Ayodhya is playing out all over again, and we are getting closer to the bottom of the pit.

For an apex court it has a surprising short memory too. Barely a year ago it had refused to entertain a PIL to ensure the human rights of millions of migrant labour, but a few short months later it was compelled to intervene suo moto. Today again, its resounding silence is stupefying, as all around us the night sky is lit up by burning pyres, hospitals are running out of oxygen, vaccination centers are being shut, the case count has touched 250,000 per day- all while the men entrusted to keep the citizens safe are either campaigning in Bengal or bad-mouthing any one who makes a sensible suggestion. The Supreme Court will not budge, which is bad enough. What is worse, however, is that it will not even allow a few plucky High Courts to do something about it. At least eleven HCs including Allahabad, Telengana, Calcutta, Gujarat and Delhi- have castigated the executive in harsh terms, the first of them ordering the UP govt. to seriously consider imposition of a lockdown in five districts. Within hours the SC stayed the order without citing any reasons, and- hold your breath!- asked the govt. to file an affidavit within one week, and posted it for further hearing after two weeks! Did it occur to the Hon’ble justices that in this period approximately 21000 more of their less advantaged country-men would die, at the current rate of fatalities? The court left no one in any further doubt about where it may be headed- abrogating to itself the hearing of all petitions on Covid management. It did not specifically say so, perhaps, but that is the perception of many eminent lawyers who have severely criticised this order. As an ex-High Court Judge, Justice Anjana Prakash put it- the higher judiciary has been reduced to a bureaucracy. And as she DIDN’T say- there is now no difference between the two, in many ways, if you get my drift. One doesn’t know whether to laugh or cry at this state of affairs; it needs someone like Ghalib to describe one’s feelings: 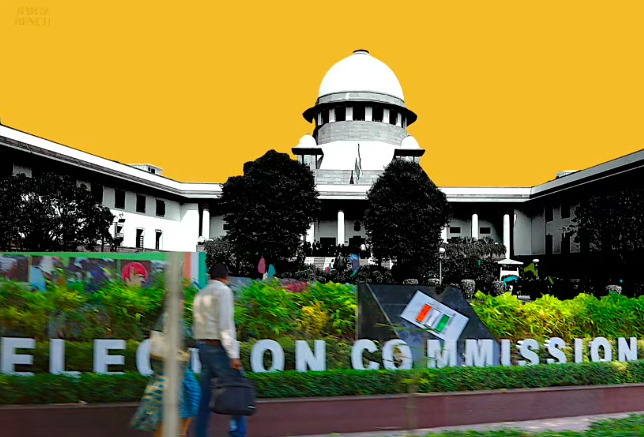 Of late, however, another constitutional institution, the ECI (Election Commission of India) appears to be overtaking the judiciary and may just pip it to the bottom. It had faltered a bit in 2019 when one of its Commissioners had shown the courage to dissent, but he was soon kicked upstairs and forced to quit the race- it’s not easy being Caesar’s wife when one has a few ” flagrant delictos” of one’s own tucked away between the sheets. Since this stumble, however, the ECI has picked up its pace and has now entered the final lap, the Bengal and Assam elections, with a terminal burst of blinding speed.

Even the inventive Piyush Goel, who thinks Newton and Einstein are the same person and who has lately emerged as an authority on how dying persons can consume less oxygen, would be hard put to explain some of the ECI’s recent decisions. How is it that an institution which slavishly toes the BJP line of One Nation One  Election needs eight phases and one month to conduct elections in just one state? And three phases to carry out polling in one district? Are these elections or eight-course meals cooked by the BJP chefs and served by the ECI, like the elaborate “dham” of my state? It certainly doesn’t say much about its ability to conduct Parliament and Vidhan Sabha elections simultaneously.

West Bengal these days seems like an occupied territory, what with 1000 companies ( or about 130,000) personnel of the CAPF ( Central Armed Police Forces) deployed there to ensure ” peaceful” polling. I’m sure it would take fewer cops to conduct elections in POK. To use the words of Nalini Singh in a recent article, this looks more and more like ” democracy at gunpoint “- to selectively intimidate the voter and provide the friendly fire for the shenanigans of one political party. And the “peaceful” part, of course, met a violent end when four voters were shot dead last week by a force with no training in crowd control, more used to reading your passport ( upside down) in airports than in handling legitimate protesters. Talk about wolves guarding sheep.

In the words of the TMC delegation, every action and decision of the ECI suffers from inaction, under action or over-action, all carefully calibrated to suit the hand that feeds it: the minutely planned phases to enable the ruling party’s well-funded carpet bombing, the shameless partisanship in handing out bans, the volte-face on the issue of Electoral Bonds, the refusal to club the last three phases of polling into one, the spurning of the demand to ban rallies to check the spread of the virus. And why does it continue to reject the demand to count the VVPAT paper slips, on the specious ground that it will take too much time? Are a few more hours of their time more important than the confidence of the citizens in our electoral process? After all, our democracy did survive the pre-EVM days when each ballot paper was painstakingly counted. Has the ECI even bothered to read the report of the Justice MN Lokur committee which has categorically stated that EVMs can be easily hacked? The only reason we are still a “partly free democracy” is because of our hitherto fair election process, in which parameter we scored 4 out of 4 in the Freedom House markings. Even that has been put in jeopardy now by the incomprehensible dogmatic attitude of the ECI.

I’m old enough to have seen an Election Commission that used its legs to stand up straight and tall, not as something to curl its tail between. I’ve conducted one state and one Parliamentary election as District Magistrate, and have been ECI Observer in four states at different times, including in the golden age of TN Seshan and Lyngdoh.  Protected by a fiercely independent Commission we took no shit from anyone. Yes, there were glitches, but no one doubted the Commission’s intentions. In my time polling booths were occasionally “captured” in the old-fashioned way, by sending in a bunch of armed goons. It was a risky operation, reparation was swift, the offence was not deniable, and repolling was invariably and swiftly held. On the other hand, the growing perception now is that the hijacking of elections today is much more simple and sophisticated: that all it needs is control of the ECI, and perhaps of the EVMs. The ECI has had innumerable opportunities to disprove this perception, in court and outside; tragically, its obdurate conduct instead only reaffirms this perception.

Things have come to such a pass that very soon we may be able to buy EVMs on Amazon and Flipkart, and there are suggestions on social media that the ECI may as well be privatized along with BPCL and Air India; let it be sold to the highest bidder. That way at least the country’s exchequer too shall get some money, rather than just one party getting all the benefits and the Election Commissioners getting their Governorships and what-not.

Since 2014 India has already slipped down on 47 internationally accepted indicators of good governance, human rights and social cohesion. It doesn’t really make much of a difference which of the two -ECI or SC- reaches the bottom of the pit first. The country is already there.