This is not about the sorry exodus of millions of our more unfortunate brothers and sisters playing out on prime TV these days. It is not a piece about the government, or about politics or economics. It is neither critical nor sacerdotal. It is not about Mr. Modi or the Biblical scale suffering he has inflicted, yet again, on those who had put their trust in him. That is a matter between him and his Maker, and I hope the potter who moulded him can forgive him, for history will not. This is not about a callous Finance Minister with the rictus of arrogance stretched across her face. It is not about a judiciary which has thrown away its moral compass in the arid deserts of ambition and preference. It is not about a media which has struck a Faustian bargain with the devil and is content to feed on the offal flung its way. It is not about Rahul Gandhi or Mayawati or Nitish Kumar for they have already become irrelevant to the pathetic course of events unfolding.

This piece is about me and the burden I carry, a burden of shame, that has been sitting on my back for the last few weeks and cannot be dislodged, no matter how hard I try. It’ s a burden which just got heavier this morning when I read a post by an army officer describing his moving encounter in Gurgaon with families of “migrants” walking their way to Bihar, no footwear on the weary soles treading on melting roads, hungry and uncomprehending four year olds, of how they wept and tried to touch his feet when he gave them a few five hundred rupee notes.

I hang my head in shame in the India of 2020. At belonging to a country and a society which exiles tens of millions from their cities, fearful of catching an infection from them, from a virus brought here, not by them, but by my brethren flying in from abroad. Of treating the hapless victim as the perpetrator. Ashamed of being a gullible cretin who swallows all the lies and half-truths churned out by a dissembling official apparatus. Of beating pots and pans as a servile hosanna to an uncaring presiding deity to drown out the sounds of tired feet marching to their distant villages.

I can no longer recognise the religion I was born into, it no longer has the wisdom of its ancient sages and rishis, or the compassion of an Ashoka, or the humility of a Gandhi. It is too full of anger, of hatred, of violence. It has replaced its once lofty ideals with even loftier statues, caring deeds with dead rituals. It once fed the mendicant and the poor but now drives them away as carriers of some dreadful disease, without any proof. It even finds an opportunity in this pandemic to stigmatize other religions.

I am ashamed of my middle class status, of many of my friends, colleagues and the larger family even. Cocooned safely in our gated societies and sectors, we have locked out our maids, drivers, newspaper man, delivery boy and a dozen others who have built for us the comfortable lives we now desperately try to cordon off from the less fortunate. We have deprived them of their livelihoods. We encourage another extension of the lockdown because our salaries and pensions are not affected. Our primary concerns revolve around resumption of deliveries from Amazon and Swiggy: the lot of the migrating millions is dismissed as just their fate- the final subterfuge of a society that no longer cares. 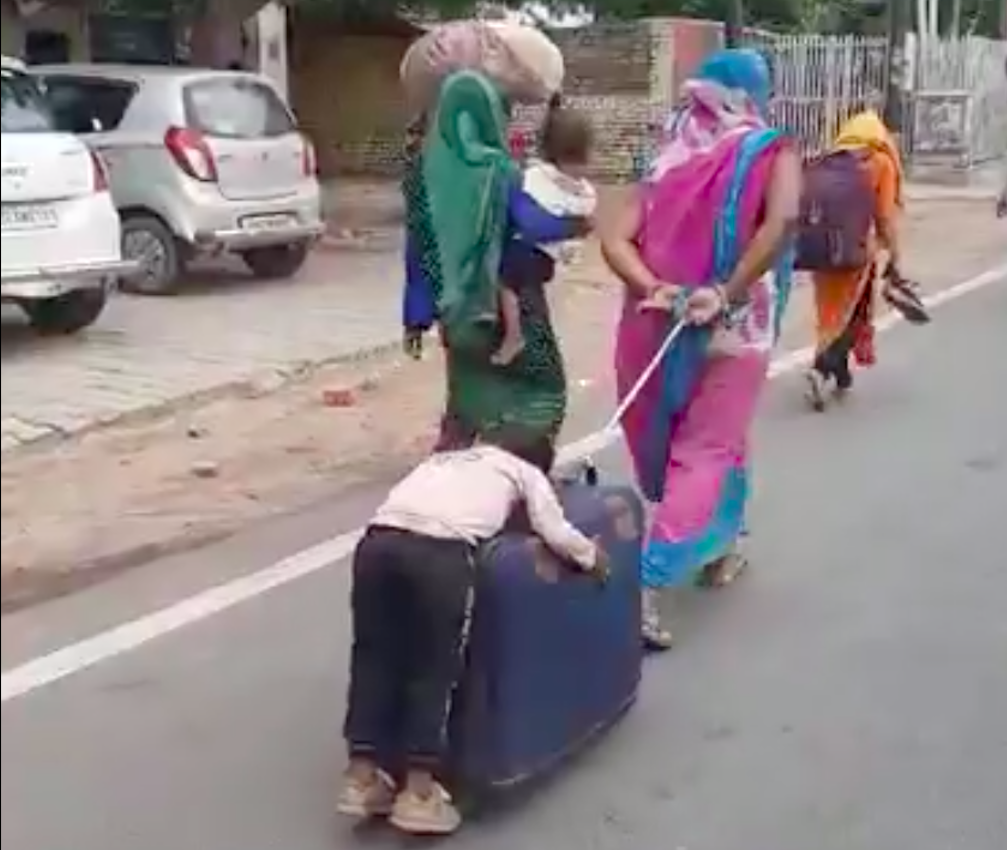 I am ashamed of the thought processes of my class, of Whatsapp forwards that oppose any more “doles” to the hungry millions, that denounce MNREGA- the only lifeline the returning labour have left- as a waste of public money and food camps as a misuse of their taxes. I am ashamed that people like me can encourage the police to beat up the returning hordes for violating the lockdown, which, in the ultimate analysis was meant to protect “us” from “them”. For the life of me I am unable to comprehend how we, sitting in our four BHK flats, have the heartlessness to blame sixteen tired labourers for their own deaths: why were they sleeping on railway tracks? How can one not be ashamed when I hear my peers decrying the expense of trains/ buses for the returning migrants, the costs of putting them up in quarantine, when they approve of their likes being flown back by Air India ? This is not double standards, this is bankrupt standards.

I am ashamed of my social milieu which lauds the leader for dismissing the cataclysmic sufferings of almost five percent of our population as “tapasya”, as if they had a choice. I am mortified to see the layers of education and affluence, the facade of civilisation being peeled back by a virus to disclose a heart of darkness in our collective inner core, the sub cutaneous mucous of hatred and intolerance for a minority community, contempt for the destitute. All age old prejudices, bigotry, racism and narrow mindedness have reemerged, fanned by a party which has fertilised their dormant spores.

I am ashamed of the dozens of four star Generals and beribboned Admirals and Air Chiefs who were quick to shower flowers and light up ships at a dog whistle from a politician but did not move a finger to provide any help to the marching millions. Did it even occur to them that they owe a duty to this country beyond strutting around at India Gate? That they could have used their vast resources and vaunted training to set up field kitchens for the hungry marchers, putting up tents where the old and infirm could catch a few breaths, arrange transport for ferrying at least the women and children?Their valour has been tested at the borders, but their conscience has certainly been found wanting.

I am ashamed of our judges who have now become prisoners in their carefully crafted ivory towers, who had repeated opportunities to order the executive to provide meaningful relief and succour to the exiled wretches, to enforce what little rights they still have left, but spurned them at the altar of a dishonourable appeasement.

I am ashamed of our governments who have forsaken the very people who elected them, and are using their vast powers, not to provide the much needed humanitarian aid these disorganised workers desperately need, but to take away even the few rights they had won over the last fifty years. I am ashamed of a bureaucracy that uses a catastrophe to further enslave those who have already lost everything, which insists that illiterate labourers fill in online forms to register for evacuation, pay hundreds of rupees ( which they do not have) for rail tickets, produce ration cards and Aadhar before they can get five kgs of rice, all the while beating them to pulp. Of a Joint Secretary to government who can apportion blame for the infections by religion. This is not Orwellian or Kafkaesqe, this is a government gone berserk. How can one not be ashamed of such a soul-less administration, and of the people who commend its mistakes?

They will reach their homes ultimately, those marching millions, minus a few thousand who will die on the way. They will not even be mentioned in the statistics: there will be no Schindler’s list for them. And we will pat ourselves on our collective, genuflecting backs that one problem has been taken care of, the danger to our neo-liberal civilisation has been beaten back, the carriers have been sent away, the curve will now flatten. But the mirror has cracked and can never be made whole again. As the Bard said, the fault is not in our stars but within us. Or, as delectably put by another great bard, one of our own who now belongs to the “others”:

Actually, this piece is not just about me- it’s also about you, dear reader. Look into that cracked mirror. Do you feel any shame, just a little , for what we have become, for the lost soul of a once great nation?