Now that homosexuality is not criminal anymore, some are already jumping the gun and talking of legalising other related issues.

Finally the draconian Article 377 has been struck down by the Supreme Court of India. The current government too needs to be complimented for the approach it adopted in this regard. It is no secret that many in BJP have very strong views on this issue of homosexuality and were against the removal of this article. By not contesting the case in court, the government of the day acted in a mature and impartial manner and that certainly deserves a mention. For a nation like India this is indeed a historical verdict.

The essence of the judgement can be summed up as ‘freedom of choice for consenting adults to pursue their sexual preferences without the fear of being questioned by law of the land or being subjected to any social stigma within the society’. It goes without saying that courts have laid the onus on the society at large to understand and accept an individual’s sexual preference. Any objection or ridicule of such a person would be deemed as an infringement of law of the land and could lead to persecution. On the other hand gay people too have to understand their responsibilities that are natural fallout of this judgement. If they do not rise and meet this challenge, both as individuals and as a group, then they will continue to face challenges from time to time.

There has been a lot of debate regarding homosexuality being unnatural and against law of nature. Frankly this argument does not hold much water. Without a doubt it is natural for a male and a female to be attracted to each other. But then so is the mutual attraction between two people of the same gender. Sexual attraction between a male and female is termed as the general ‘law (rule) of nature’ since it is true for most of the humanity. If that be so then is attraction towards same gender against this rule? It may be prudent to view such an attraction as an exception to the rule rather than against the rule. It is well known that presence of exceptions validate a general rule or law. Therefore for the ‘law of nature’ to exist there have to be some exceptions. Hopefully this should end the debate that attraction between two people of same gender is against the law of nature. 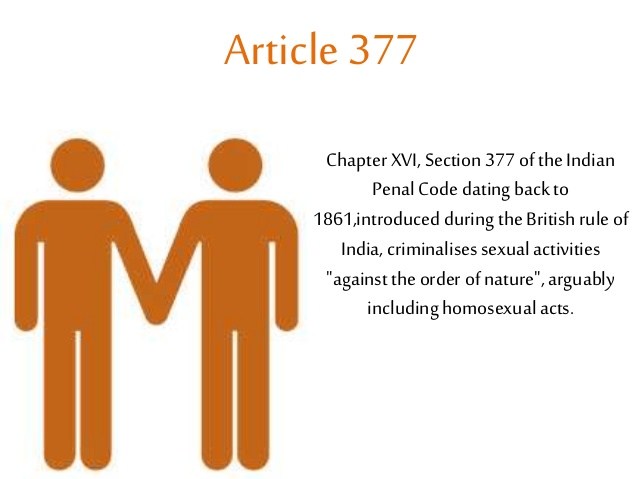 Implementation of first part of judgement regarding criminality will not pose any problem. However the second part related to acceptance by society is where problems will still come up. India is a vast land with a population of over 1300 million. Lack of education and development continue to be major issues. Dogmas, meaningless practices, outdated beliefs, societal pressures, narrow outlook and inability to expand individual and societal horizons are some major issues that continue to plague the society. It will be foolish and impractical to expect same level of acceptance of homosexuality within Indian society as is common among western societies. Such acceptances evolve over a long period of time and cannot be pushed down the throat of a society overnight. Therefore all concerned would have to show patience and understanding in this regard.

In the recent past there has been a lot of debate on whether one needs to wear his nationalism on his sleeve at all times so as to be seen as a nationalist. The consensus that emerged was that there was no such need. One could use the same analogy when it comes to ones choice of sexuality. No one needs to wear his or her sexuality on his or her sleeve at all times. More so what one does in the confines of a bedroom is an entirely personal matter. This statement is valid for all irrespective of their sexual preferences. For gay people there will be a need talk to the family or others who are close to clarify their sexual preferences and to set the record straight. However there is certainly no need to go public with such disclosures since public has nothing to do with it. The need to go public has come about because of some celebrities who want to exploit their gayness to seek publicity or in some cases to adopt an ‘in your face’ attitude as part of their personality. Unfortunately such celebrities send wrong signals to the public at large where young impressionable minds with gay leanings feel going public is the only way to go. While celebrities get away and in fact gain by such public disclosures, the common man or woman suffers wrath of the society.

Now that homosexuality is not criminal anymore, some are already jumping the gun and talking of legalising other related issues. Frankly baring gay marriage and adoption other issues like live-in relationships, inheritance, alimony etc do not really merit any debate. It is argued that adoption can even be done by a single parent so a gay couple doing the same should not matter. However if one were to examine this a bit more for its ‘cause and effect’ then some complications do arise when a gay couple adopts a child. In the case of a single parent sexuality will normally not be an issue and the parent could pass off as a mother or father depending on the gender without any serious harm to a child’s psychological state. In case of a gay couple it is not so simple and the child is likely to face a lot of conflict in his or her growing years. Firstly sexuality will always be a question mark and secondly a growing child is likely to be faced with a situation of either two mothers or two fathers. Both these home truths will be unlike what the child is likely to encounter in the environment around him or her. Such a situation could be very traumatic for a young child till he or she reaches an age where understanding can dawn on him. But by then in many cases damage may have already been done. This is a serious matter and cannot be just wished away by gay couples for their narrow selfish motives.

The demand of gay couples for conjugal or marriage rights are subjects that have generated a lot of debate. The truth is that marriage is not about sex alone. The very concept of marriage envisages union of two human beings of the opposite sex in a personal relationship that results in reproduction and raising of a family. The act of sex, in its true form, is linked with procreation and this can happen only between a man and woman. It is pertinent to understand that bringing up a family needs a combination of warmth, love, care, patience and compassion provided by a female coupled with the firmness and security provided by the male partner. It would be rather inane to assume that two people of same sex living together could fulfil all these conditions and create an environment for raising a family.

Frankly it will be silly to bring religion into this debate since it has no role to play in sexual preferences of an individual. Similarly it will be incorrect to link morality with ones sexual preference. There is absolutely no link between the two. It may be good for such people to understand what Mark Twain said on morality “Morals are an acquirement, like music, like a foreign language, like piety, poker, paralysis; no man is born with them”. It will be foolish to assume that a homosexual or a lesbian cannot have high morals since there are any number of examples of such people who are not only held in high esteem but are also high achievers in the society.

India, as a nation, has taken a bold step by striking down Article 377 to keep up with changing times. However the same may not be true if it follows the western nations blindly when it comes to gay marriages or adoption. The nation needs time to be prepared for such changes that will only come with spread of education, development and awareness in the years to come. It may be prudent, in the interests of the nation as a whole, to wait for an opportune time before taking any concrete steps on such issues. What is more important as on date is to work towards acceptance of gay people in all spheres of public life without demeaning them in any way because of their sexual orientation.