Lets first define the terms I am talking about.

Any observer of the events that have been unfolding over the last few weeks in this country could not have failed to notice how deep the rot has spread in our polity and society. Its no longer a question of Congress or BJP, government or business, judiciary or media – the cancer has metastatised through all the organs of the state. As Lalit Modi regurgitates dirty secrets on the twitterverse on an hourly basis and our rulers and erstwhile conscience keepers retreat deeper into their carapaces, a distinct pattern appears to be emerging of how a few individuals and families have taken over this country by manipulating the processes of democracy, and are now sucking it drier than the East India Company ever did. And the inevitable question that arises in my mind is: are we a democracy at all, or have we been hijacked ?

It is becoming clearer each day that the BJP refuses to take action against its errant Ministers that our democracy is just a facade. All the four pillars of a democratic dispensation – the legislature, the executive, the judiciary, the press – have developed deep fractures and have been taken over by termites and weevils who have hollowed out the innards of the edifice. They have been fattening themselves at our cost all these years; once in a while one of these insects tumbled out but we took little notice, and suspected no real danger. But now the Queen Bee itself is talking (or tweeting) and as the secrets tumble out the extent of the infestation is becoming clearer.

It is my contention that a few families and individuals in our four vital organs- executive, judiciary, legislature, press – have taken them over and have moulded and disfigured then to suit their own purpose, and the country be damned. 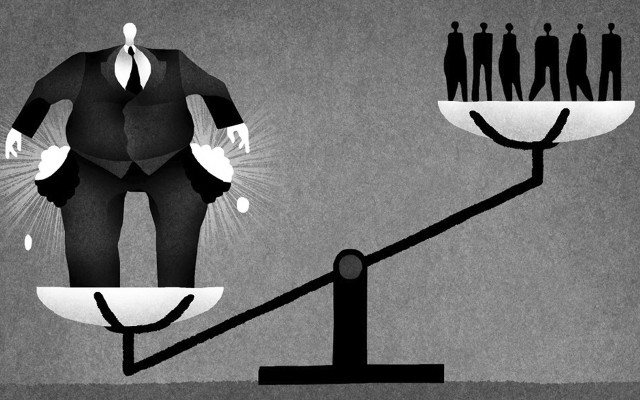 Consider first the political executive. State after state has been commandeered by the likes of the Badals, the Dhumals and Virbhadra Singhs, the Yadavs and Mayawatis, the Patnaiks, the Karunanidhis and Jayalalithas, the Pawars, the Hoodas and Lalls of various denominations, the Abdullahs, Raos and Naidus. The states have become privately owned businesses. It is impossible for anyone not owing allegiance to one or the other of these sicilian-style families to enter the power structure. Parliament itself is the personal fiefdom of a few dozen families, a franchise of the dominant families; and the franchisees are doing very well, thank you: according to the website of the Association for Democratic Reforms, the average wealth of an MP in the current Lok Sabha is now Rs. 15 crore, up from Rs. 9 crore in the last one. And this is only the declared assets! The state legislatures are no different, packed with sons, daughters, their spouses etc. of the Dons. And so we have the scandalous situation of the Badal family having twelve Ministers in Punjab, and Mulayam Singh has so many of his family in the government that even he probably can’t remember the number.

The judiciary too is not exempt from a few question marks, the biggest of them being: why is it so keen to retain its choke-hold on appointment of Judges ? In no other genuine democracy do judges appoint judges, but here we have a circus playing out on a daily basis in the Supreme Court where a perfectly reasonable NJAC Act is being scrutinised for its constitutionality, and in the interim all appointments have been put on hold – and that too when as many as  251 posts of judges are lying vacant and more than 40 million cases are pending in the courts. Why? Maybe the answer lies in the following statistics which a Mumbai lawyer M.J. Nedumpara recently submitted to the Supreme Court, based on information gleaned from the websites of the SC and 13 High Courts: 33% SC judges and 50% of High Court judges are ” related to higher echelons of the judiciary”, which translates to 6 in the former and 88 in the latter. This has been the result of the existing Collegium system of appointments (which the NJAC seeks to replace) in which vacancies are neither notified / advertised nor is there any transparency in the appointments. Further, a succession of judgements in the past has ensured that retired judges have almost complete monopoly over appointments to various Commissions and Tribunals, guaranteeing them post retirement sinecures. If this does not smell of an oligarchy or netocracy I am not sure what does.

Take our so called “free” press or media. Most of our leading newspapers and News Channels are owned / managed by business interests (Bennet Coleman, Mukesh Ambani, Bhartiyas) or politicians (Jayalalitha, the Marans, Rajeev Shukla, Chandan Mitra, the Badals, Karthikeya Sharma). Their agenda is naturally set by these behind-the scenes puppeeteers whose sole objective is to preserve the oligarchic status quo. They will not tolerate any change or any “outsider” trying to crash the party. That explains their almost vitriolic hatred of Narender Modi when he first made his bid for Delhi, or of Arvind Kejriwal even today. Mr. Modi is now acceptable to them partly because they have no choice now that he is the Prime Minister, and partly also because he is gradually getting co-opted into the cosy club himself. But Kejriwal is still fair game for a disgustingly biased reporting because he will not abide by their rules.

Consider next India Inc. as our world of business is grandly termed. They are the real plutocrats who pay the piper and call the tune. Protectively nurtured in the licence-raj nursery they have now attained adulthood and have claimed their legacy. There are 180,000 of them – dollar millionaires. But the real barons of the business world, the dollar multi-millionaires number 14800 (India Today, 10th November 2014) and they are the real oligarchs. According to the Credit Suisse Global Wealth Report of October 2014 the top 1% of Indians own 49% of the country’s wealth, and this continues to grow: in 2000 the figure was 36.8%. The top 5% own 65.5%. In contrast the bottom 50% Indians own just 5%! And this in a country where a quarter of the world’s destitutes reside, more than 400 million people still live below the poverty line – now we know why they are there. Even in a far wealthier country like the UK the top 1% own only 23.3% of the wealth.

These then are the four sub-oligarchies which coalesce into a grand whole which is the democratic republic of India. The four guard their turf zealously, both individually and collectively, and also network with each other to ensure that no harm befalls any of them. They do not allow any meaningful action to be taken against any of them and ensure that wrong-doing is never punished. The Radia tapes exposed the most venal complicity between politics, media and big business but were quickly erased. 2G and coal allocations were not a one-off mistake or malfeasance: they were part of a mutually beneficial public policy, and many more names than those charge-sheeted are involved, but the lid has been hastily lowered on the investigations. It is common knowledge where the SAHARA moneys came from and where they went, but our oligarchs are certainly not interested in the truth becoming public, so Subroto Roy remains in jail: he will pay the bail amount some day and walk free and everyone will breathe easier. Jayalalitha’s bail application is heard in record time while the victims of UPHAAR still wait for their application to be heard even after one year.

Convicted members of our privileged netocracy can get bail within hours while unconvicted undertrials rot in dungeons for years. A High Court judge passes a patently illegal order and threatens to register an FIR against his own Chief Justice; another defies the law by refusing to sentence a convicted rapist and instead ordering a “mediation” between the rapist and the victim (!!)- and both continue to serve in the courts, no doubt to pass similar illegal orders in the days to come. Five thousand poor farmers have committed suicide in the last one year under pressure to repay their loans, but one of our high flying (literally) multi-millionaires who owes more than Rupees seven billion to the banks continues to party in his private jets and Mediterranean villas and produce movies for his son. The country’s banking system is collapsing under the weight of Rs. 300,000 crores (US$ 50 billion) “non-performing assets” which is just a euphemism for loans taken by big business which they just refuse to return, with no consequences for them: of course, you and I have to pay for it by more expensive loans and lower returns on deposits. Official secrets are stolen from central ministries and the companies doing so identified (yes, they belong to our 1% club) but only class four employees and middle level managers arrested: the long arm of the law in India shrinks in direct proportion to the moneys and oligarchs involved. (I can guarantee that we will hear no more of this case). No less than four retired Supreme Court judges give (paid) legal opinions to help an absconding Lalit Modi, knowing fully well that his case is sub-judice and is likely to come up before the same court they were a part of till the other day. Can money speak any louder?

One can go on ad-nauseam but I think I have made the point intended-viz. that our oligarchs look after their own. In the first place laws and policies are made to suit them. If they still fall foul of them, then the laws are bent to breaking point. If even that doesn’t help then perverse legal interpretations are floated (such as drawing a distinction between an ” affidavit” and a ” disposition” and ” absconder” and ” evader” and so on.) And if, by some miracle, even that is of no avail then the final frontier stares us in the face: an impenetrable thicket of laws and lawyers, judges and judgments, adjournments and appeals that somehow ensures that the innocent is incarcerated and the guilty is freed.

Is it any wonder then how the present Lalit Modi burlesque is playing out? The Congress may be shouting ” thief!” now but it took no action against Lalit Modi when it was in power itself – how could it, when it has been feeding at the same trough in our own Animal Farm?  In fact, Mr. Lalit Modi has rendered a great service to this country – he has exposed the putrefied core of our democracy and revealed how every institution meant to strengthen it has actually been undermining it from within. It would appear our tryst with destiny has been postponed indefinitely, for surely it cannot be our destiny to be an oligarchy? To take another metaphor from ‘Animal Farm’: