The last week has been all about farmers and the distressed farm sector. The word farmer seems to be the flavour of the last fortnight. The unfortunate death of late Shri Gajendra Singh at the Aam Admi Party (AAP) Rally has ensured that the subject will hog the media headlines for some more days. A lot of speculations, charges and counter charges are flying around between different political parties. It is also very obvious that all political parties have only one motive in all this debate about farmers and that is to score a few political brownie points.

The forthcoming elections in Bihar and Uttar Pradesh (UP), two major states with agrarian society will ensure that this subject continues to attract a lot more political rhetoric on farmers and their plight today. The debate on the agricultural sector, be it the Land Acquisition Bill or damage to the standing crop, seems to be restricted at the national level implying that it is the problem of the government at the centre to find all solutions to these problems. This is neither correct as per our constitution nor possible in practice.

Agriculture is one among the list of 69 State subjects where the state governments have full legislative powers. However the national parliament does have powers, under special situations, to legislate on subjects that are part of the state list. The moot point here is that the prime responsibility for managing agriculture and issues related to it lies with the state government. The national government can only augment the efforts of the state by launching schemes or projects aimed at national level. An example of this is the Seed Act and the Insecticide Act passed by the central government to cover whole of India with a view to maintain uniform standards of quality control etc. However the respective state governments under the Act are entrusted with the executive role as per guidelines of the Act. If such legislation is not carried out at national level, it is possible that hi tech seeds like Bt cultivars in cotton, brinjal etc would be allowed or disallowed according to the whims of fancies of individual states with probable impacts on the neighbourhood states that may result in avoidable controversies. 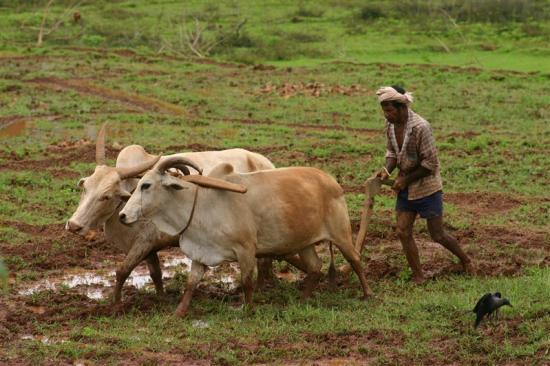 The national government’s crop pricing policy appears to be very systematic and in principle farmer friendly. The national government fixes the Minimum Support Price (MSP) based on recommendations of the Commission for Agricultural Costs and Prices (CACP). The Minimum Support Price (MSP) is the price fixed by the Government to protect the producer – farmers against excessive fall in price during bumper production years. In case the market price for the commodity falls below the announced minimum price due to bumper production and glut in the market, government agencies purchase the entire quantity offered by the farmers at the announced minimum price.

The Procurement price of a commodity refers to the price at which government procures the commodity from producers/manufactures for maintaining the buffer stock or the public distribution system. The later is invariably higher than MSP. The procurement price is the price government pays to buy from the farmer or broker to maintain the national grain reserves in consultation with state governments. Thus in actual practice only a small part of the produce is purchased at procurement price, either through willingness of the seller and if that is not forthcoming then by imposition of a levy to ensure that food reserves are maintained. The levy is capped at a maximum of 25% of the produce of a farmer.

If food reserves do not require any augmentation, the levy is not imposed. Rest of the produce is sold by the produces in open market where the price is always higher than MSP. All procurement for the central government is carried out by state governments. It is also important to note that there is nothing to stop the state governments from offering additional incentives to the farmers within the state.

The fact that the politician and government combine has not served the interests of the small & marginal farmer community is not debateable. It suits the politician to keep the farmer where he is and only show him some dreams from time to time so that his vote is assured. The government does not take the poor farmer seriously since he has hardly any voice. It is also pertinent to note that the agriculturists with large holdings and carrying out farming on a large scale do not suffer in the same manner. Therefore no tears need to be shed for them since they enjoy many privileges at the cost of a common tax payer. They do not pay income tax, enjoy subsidised loans that too are waived often and get most inputs like seeds, fertilisers etc at subsidised rates.

The real problems being faced in the agrarian sector are by the small and marginal farmers with either small holdings or those who till the land on tenancy basis. Such farmers have very little access to bank loans and have to rely more on the local loan sharks who charge anything up to 8-10% per month on the money advanced. Unless the farmer has ownership of land, he is unlikely to be considered for a bank loan. Most land tenancy agreements include sharing may be up to half the produce with the owner of the land. Has the government done sufficient to make life easier and farming more lucrative for such farmers? The answer is in the negative across the nation and that is why the increased number of suicides every year.

Insurance of crops is something that is restricted to only large holdings where farmers can reap benefits from such institutions in case of crop damage or failure. Others have no access to such security, since neither the local administration nor the institutions have really made it possible for them to realise such benefits.

For the poor farmer in a remote village the government is possibly limited to the district level. If the district administration had served him well over the last four to five decades, possibly his plight may not have been as pathetic as it is today. If the district administration had been pro-active and instituted proper measures to ensure that the poor farmer’s interests were protected, by now the nation would have had a fairly buoyant agricultural sector instead of the mess it is in today.

The problems are known to all concerned; only the will to act is missing, possibly due to vested interests who do not want to see any change in the system. It is time the district administration and the state governments act and execute their responsibilities instead of passing the buck to the central government. The media, political and social organisations too have to play their part in educating the masses and highlighting the role required to be played by the local state governments instead of pointing fingers at the national government at all times.

One really wonders why the AAP was holding a Kissan Rally in Delhi. The state of Delhi has very little to do with agriculture and it has more pressing problems to address than take out rallies for farmers cause. As per estimates the total contribution of agriculture and allied services in 2011-12 to Delhi State’s Gross Domestic Product was only 0.87%. In 2004-5 it was 1.09%. The total rural population of Delhi as per census of 2011 was only 0.42 million which is only 2.4% of the total. The land under agricultural use is constantly on the decline as is the number of people engaged in agricultural related activities. So who were AAP and Mr Kejriwal trying to fool? Obviously the rally was not in the interests of the state of Delhi or its citizens.

It was more with an eye on polls in Punjab and other states where AAP may like to venture in future. So was Kejriwal & Co using Delhi’s poll verdict to expand their base in other states? The answer is obviously in the affirmative and that in my book is being unfaithful to the people of Delhi. If AAP is eying Punjab in future, then it needs to go and hold a Kissan rally there since that state is affected by such issues unlike Delhi. Delhi government has to work for people of Delhi first and foremost and Kissan rally has not added any value to the state of Delhi. Can Mr Kejriwal please clarify why he held the rally in Delhi? Of course he has a lot more to explain since the whole drama in Delhi, that was possibly stage managed, went horribly wrong with the unfortunate death of late Shri Gajendra Singh at the rally site.

Finally it is time to stop presenting industry as an enemy of the farmer. Industrialisation and agriculture have to progress hand in hand if the nation has to scale new heights. The nation cannot afford to ignore either of these sectors. Land holdings invariably become smaller with each passing generation and therefore unviable in absence of other options for livelihood. Today the country has about 60% people whose livelihood depends on agricultural sector. This figure is not sustainable in the future. Therefore jobs have to be created in rural sectors where youth can find alternate employment. Land Acquisition Act and industrialisation must be seen in context of this development and not in isolation by all those who are charged with running the nation.

The opposition political parties will do well to remember that they too have a role to play in nation building. It is time all concerned, particularly the opposition in the parliament and state assemblies, stops opposing every move of the government by using the oft repeated slogan ‘anti-poor & anti-farmer’ and instead start working constructively with the government by using the slogan ‘pro- poor & pro- farmer’.