Spring has broken out in many Himalayan valleys, but Spiti, cut off from the world and under heaps of snow, without electricity for nearly a month is in deep winter that only the brave natives and extreme adventurers like Himanshu Khagta thrive in.

At an altitude of 3650 meters (11,975 feet) with temperatures dipping to minus 25 degree Celsius, no tap water, no hotels, and no sewerage systems working, surviving and documenting a winter in Spiti was something that ignited the adventure streak in a young Himanshu last summer when he enjoyed trekking in the valley highlands.

“It was during hiking around the hills of Spiti, last summer, when I considered that I should come back in the winters to experience how the people survive in such harsh conditions. So that’s how the project started,” says Himanshu in a short email communiqué about this personal project.

All of 24, the young professional has already come a long way. Having done assignments for The New York Times, The International Herald Tribune, Hindustan Times, Destinasian, Femina, Outlook Traveller, Discover India and Carlson Rezidor Group, his impressive photos are stocked with Getty Images, Corbis and Alamy.

Driving uphill from Chandigarh, passing through the apple growing heartland of Kotgarh, where it was still warm, Himanshu somewhat tired from the long solo journey arrived at the gates of Hotel Sakya Abode, Kaza  on 31st October, 2014. Not yet winter but the temperatures before entering the hotel’s lobby was 1.3 Degree Celsius.

It took a while to unload the car load of camera gear, clothing, computer gadgetry, inverter, solar panel and other heavy duty equipments. Determined to live out the winter in Spiti, he was there to see, photograph and document how the natives live through what perhaps is the one of harshest climatic zones under the Indian geography

The hotel provided some comfort till it shut down for winters. All temporary summer residents – tourists, migratory birds, wildlife gazers and even the dabha owners who come to live in Spiti during the summers, one by one left as the winter descended into the valley.

Left to themselves, the Spitians having gathered dry bushes to fire up the winter were prepared for the harsh days ahead.

Using solar power to charge his iPhone batteries, surprisingly the BSNL mobile telephone network, the only one in Spiti, with a reliable backup is operational even during the coldest days.

“The data I have collected is being used to regularly update www.lifeinspiti.com and when I have enough data, I’ll even publish a photo heavy book that documents the life of the people of Spiti. It won’t be a photo book for sure,” he says.

The harsh conditions have in no way broken him but firmed his resolve further. “I wanna see Spiti in every season. So I think I’ll stay till May.” 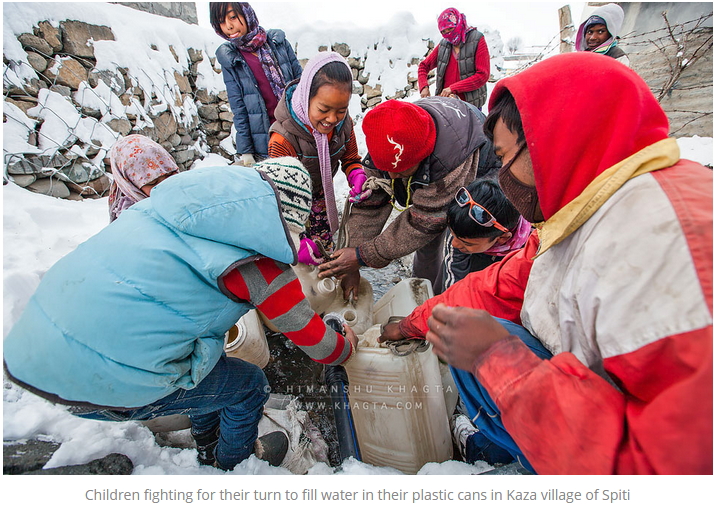 By mid November, piped water had frozen. There being no flowing water, the meager sewerage system shut down. “In winter, taps here are of no use. People fill water from the hand pumps and carry it to their homes in 40 liter and 20 liter cans. This is a daily chore and needs to be done.

Staying in Kaza, the divisional headquarter; life is comparatively more comfortable than the far off villages.

Every spell of snow leaves Spiti landlocked. A creaky old bull dozer is put to use and brave public works department (PWD) workers, after much struggle do manage to open up road access to Kaza.

“PWD works amazingly, even when they have just one old bull dozer, but they make sure to clear the snow off the village roads. They are really skilled in cleaning the snow and avalanches. The main road is under GREF. Where the main road has snow but village roads are cleaned properly,” records Himanshu.

“Beyond Kaza, it’s all a wilderness. Losar is always closed. People walk for three days to reach Losar from Kaza. These days even the road downstream to Tabo is closed.

Even the civil supplies depot is working nicely. Even though the road is blocked, the fueling station is always functional. 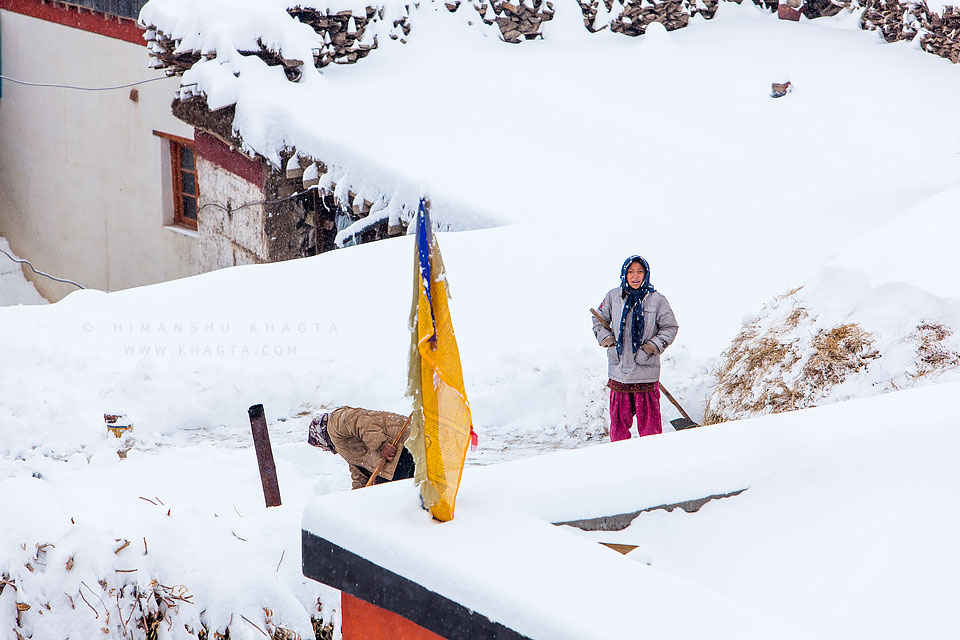 When it snows, locals run out to remove it off the rooftops of their mud houses. That is something which needs to be done on priority even when the temperatures are hovering at minus 5 or minus 10 degree Celsius.

The hospital (CHC) at Kaza is functional. There is always staff there but they have limitations. With no electricity, the X-Ray machines and other equipments do not work. There is no heavy duty generator to run these machines. There are ambulances around but with the roads closed, they are of no use.

There are no specialists at the hospital. The doctors have to risk a lot for their patients. Any complication is referred to Rampur. It takes a day for a patient to reach Rampur hospitals. So thats a problem.

Spiti is a country cousin of Lahaul, which together forms the second largest district entity in the entire country. Between the two divisions, spread over the outer flank of the Tibetan plateau, this is one district in the country where population trends are on the decline.

No regular helicopter service reaches Spiti valley. This winter there have been only two flights. Lahaul, the richer and politically more powerful valley, on the other hand has multiple weekly flights that make a flash in news reports. Spiti continues to suffer neglect. 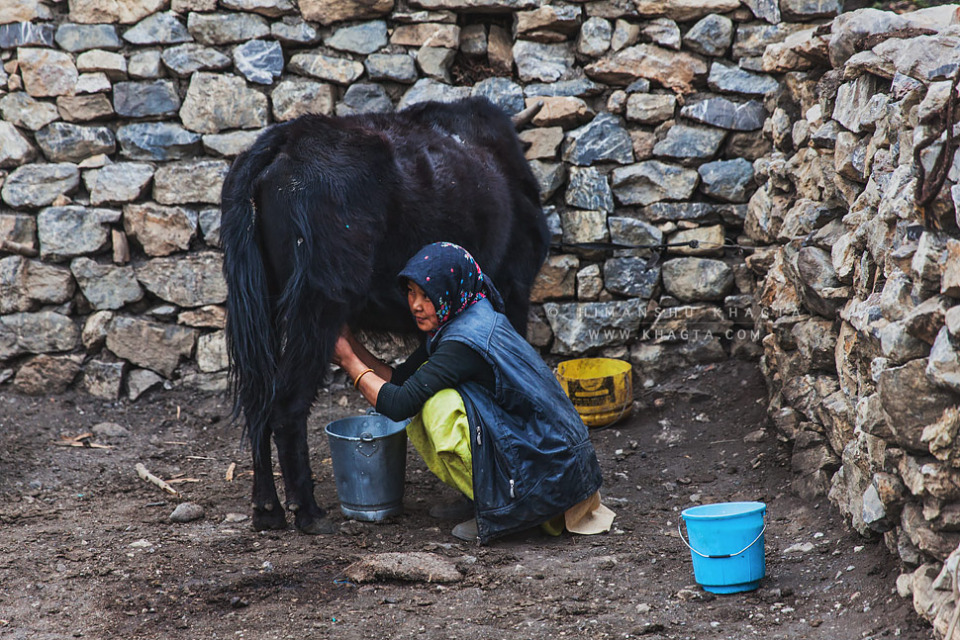 Keylong (the district headquarters) remains closed from Spiti for 8 months.

“The people here have been living like this for more than 1000 years old so the dependence on the government is not much. We have no electricity for the past 28 days and no one has even complained,” does not surprise Himanshu.

Should the government be able to provide electricity and running water in winters, the locals would be more than happy, he notes.

“Local people are extremely nice. People have their own solar backup and some have generators to charge stuff.  My Spiti friends have started looking for slopes for skiing. So I’ll learn to ski as well.

Other than all this, life here is super comfortable if you learn how to live like locals. Though the temperatures sink down to -25 C, the rooms are kept warm with frequent firewood.  Also with proper clothing its not that difficult to survive the harsh weather.”

“Its rather really beautiful to live here. With such warm hearted people and such beautiful landscape. Spiti is pure heaven in winters. No place in India offers so much peace of mind,” is how the young professional describes his ongoing stay in the valley before setting out uphill on 18th March to spend a week at Hikkim village (Atltitude over 14,000 feet).