Dehra Dun : Instability has been the bane of Uttarakhand. This coupled with an unaccountable bureaucracy have been the main reasons that rather than going forward on the path of development and progress for the well-being and prosperity of the aam aadmi, this small hill state is steeped in corruption. 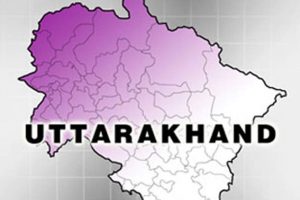 Even as Vijay Bahuguna tried to put at rest all speculations that he was in likely to be replaced and there is hectic lobbying amongst the probables for the coveted post, reports doing the round in the state capital are that the Congress high command has already taken the resignation of the chief minister. However, the Bahuguna lobby is trying desperately to stall the induction of a new chief minister.

Uttarakhand was formed in Nov 2000. Nitya Nand Swami of the BJP, who was not a son-of-the-soil and therefore ill-informed of the basic problems and requirements of the people of this small hill state was made its first chief minister. As such he neither had a vision nor a plan leading to disillusion amongst the rank and file of the BJP in the state which started hankering for his removal. Needless to say he was replaced mid-way.

Then came the Congress with Narain Dutt Tewari as the chief minister. His exploits are now known, as he battles a paternity suit in the courts and had also to face the ignominy of having to give up his gubernatorial assignment, albeit for other reasons, but he was able to stay for the five year period as chief minister, more because of his experience as a politician and political maneuverings.

Though a lot was expected from the experience and guile Tewari that he would be able to steer this state yet in its infancy to a path of prosperity and the dreams of the aam aadmi may finally become a reality, but inner-bickerings within the Congress, as a group tried to dislodge him and install its own leader as chief minister kept him more busy than interests of the state.

And now as Bahuguna, son of former leader Hemvati Nandan Bahuguna, was made chief minister despite a majority of the Congress legislators favouring union minister Harish Rawat, the chief minister found himself on a shaky wicket from day one, despite all support from the party high command. But rather than focusing on the state and its immediate needs, Bahuguna was more busy trying to consolidate his own position and save his chair.

The manner in which the Kedarnath tragedy was handled, with relief and rescue operations yet to reach some of the badly hit in the hinterlands of this mountainous state and as people desperately resort to shramdaan to make approach roads to their villages have had their affect. Relief material sent for the disaster hit rather than being distributed to the needy rotted in the godowns and was dumped into the rivers of the state.

Corruption has become the hallmark of Uttarakhand, which was visible even in the airlifting of the stranded people in the Kedarnath tragedy and in the distribution of relief money, not to mention the procurement of relief package material. Rather than taking stern action and implementing programmes and policies which would bring smiles to the face of the people, Vijay Bahuguna also dithered on important issues as his detractors were busy trying to dislodge him.

And now having got the support of independent and BSP legislators who have formed the people’s democratic front, Bahuguna’s supporters claim that they have the support of 22 legislators and have sent a letter to the party high command stating that they do not want him to be replaced by anyone else. If need be, they will also be produced before the party high command.

With no leader worth his name, who has mass support and respect of the masses and can guide the state in its initial years, instability continues to be the hallmark of Uttarakhand. Because of the instability the bureaucrats are also having a field day and the small hill state continues to slide backward rather than move forward.

The hopes and expectations of the people, who struggled for being removed from Uttar Pradesh and carved a new state have long been shattered. As they leave their hearth and homes in the hills in search of greener pastures, they fervently hope that the national parties will do away with this era of instability and install a man at the helm who will be able to deliver the goods.

After the failure of the Uttarakhand Kranti Dal (UKD), which had spearheaded the statehood agitation, on all fronts, there is no hope of some regional satrap in the coming few days doing an AAP in Uttarakhand.