Shimla: Beating other big states Himachal Pradesh was conferred the best state in the country in health and investment sectors at a state of states conclave – 2013 held at New Delhi yesterday.

According to the report of India Today that was released on the occasion, Himachal Pradesh outperformed in health & investment sectors among big states of the country during last one year. 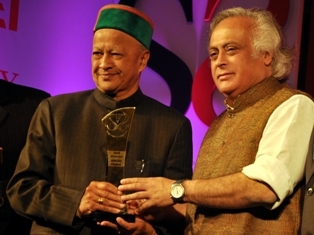 The India Today report recorded that Himachal Pradesh had outperformed all the big states on every health indicator.

Himachalis are also expected to live longer with life expectancy at birth being 70 years.

The State is targeting an annual growth rate of 15 percent with concomitant 9 percent growth in GDP. The manufacturing sector is likely to contribute at least 25 percent of the state GDP by 2022.

The report reveals that in the past 12 months alone, the state’s Gross capital formation has grown 70 percent as against the national average of 29 percent while industrial workforce has increased by about 20 percent compared to less than 10 percent in other big states.

Chief Minister Virbhadra Singh dedicated the award to the people of the state. Speaking on the occasion, he said that the state had received awards in both small & big state categories in various fields since the very inception of the award.

He said that the Himahcal Pradesh had enhanced its health budget by a huge 24 percent for the year 2013-14 in comparison to the previous year.

The government was providing lucrative incentives to the doctors and shortage of the specialists was being filled up on priority. He said the state had eradicated malaria and brought leprosy cases down to less than one per thousand.

There were 3841 health institutions and 80 percent of the health needs were being met by the public sector. The sex ratio had also gone up from 915 to 972. The State had registered 30 percent rise in the number of registered doctor in comparison to 10 percent rise in other states. Its female infanticide ratio had come down to 39 per thousand from 47 per thousand during last one year.

The chief minister said that the state had set up 42 industrial areas, 17 industrial estates and was planning to develop new industrial quarters at Khandouri in Kangra and Pandoga in Una and Dhobata in Solan District. It had also formed an 8,000 bigha land bank comprising both government and private land for setting up new industries.