The movie industry that is iniquitous for dishing out mindless-plots such as Chennai Express, which turn out to be box office grosser’s, is out with something that will indubitably institute a new trend in Hindi film industry.

Madras Café is an espionage-political-thriller that is high on intellect, emotions, realism, political drama, sleaze, trickery and bloodbathx 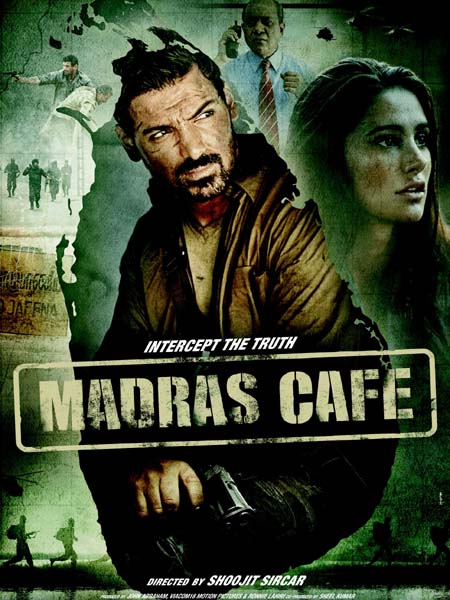 Directed by ever-talented Shoojit Sarkar (Vicky Donor fame), the thriller revolves around the issues of ethnic strife in Sri Lanka in the late 1980s and early 90s followed by assassination of Indian Prime Minister Rajiv Gandhi. Also, the flick unflinchingly depicts the entanglement of India in the Sri Lankan civil war that cost us more than 1200 soldiers.

The movie to my mind is the closest brush with reality for the concerned subject ever.

Madras Café is a story of Indian Army’s special officer Vikram Singh (John Abraham) who is deployed on a partly covert type operation in war torn Sri Lanka. He reports to Research and Analaysis Wing. Vikram comes across an unfathomable conspiracy that also involves a premier RAW officer.

With time, he unearths some dark secrets in the war. He also comes across a British war correspondent Jaya (Nargis Fakhri) who is on a mission to divulge the real truth of the civil war.  It is she who helps Vikram in concealing the last lingering secret of the story.

At no point Madras Café was left wanting for a push as the continuity was as spick and span as flowing water; even without musical scores and justifiably so. The documentary styled plot hit right strides right from the opening scene and the political facts kept blending figuratively with the dramatized narrative. Cinematographer Kamaljeet Negi’s long shots of scenic locales vividly explore the essence of beaches and waters of Kochi and Jaffna.

The story began tad confused in search of shores. But once the plot caught upon the conspiracy theory (post interval) that coupled the assassination of Rajiv Gandhi to intrigues of big corporations to gain control over the island nation and destabilize India, the story ran like a tracer bullet. The tale is remarkably self-possessed but whimsical at the same time.

The film lacks a typical villain but only the LTF (a Tamil sympathizer armed group) headed by Anna (Ajay Rathnam) who played Prabhakaran, the fearless leader of LTTE. The movie brings on board the revulsions of civil war and its human corollaries. It in no way celebrates the empty-headed militaristic heroism.

The writers (Somnath Dey and Shubendu Bhattacharya) have penned down the best espionage political drama that Bollywood has ever been a party to.

The climax scenes are too transfixing and the portrayal of elimination of the Indian political leader by the world’s first ever human bomb is effectively researched.

The humiliation faced by the Indian government in form of the recall of Indian peace Keeping Force from Sri Lanka also showed lack of astute scheduling from our side. The movie keeps a balanced view and evidently shows that only innocents are at loss in war.

But, the plot narrows down finally, with all concerned just with the death of former Indian Prime Minister.

The movie is not released in Tamil Nadu post protests from the Indian Tamils complaining about the misrepresentation of facts.

Their grumble seems justified as the movie gives detailed coverage only to the violent response from the LTF while atrocities committed by Sri Lankan army and Sinhalese majority is just confined to initial scenes and therefore, go unnoticed.

Overall, the movie covers all aspects of the war comprehensively. The introduction of Tamil speaking actors in the plot lends a more authentic look. Nargis is satisfactory despite all her dialogues being in English.

And, words are less to congratulate both John and Shoojit Sircar. It’s shameful for the ‘Kings’ and ‘Sultans’ of Bollywood to work meanly, just to rake in easy moolah when people lesser in name and experience are scripting out the real cinema.

Those who feel culpable to contribute to the success of ridiculous flicks such as Chennai Express must wash their sins watching this film at least once.

*The movie gets 4 stars on the scale of 5 from Hillpost.