Something around a decade back, Saamy was released in Madras, starring Vikram. The success of the flick initiated a spark in south for high-voltage masala cop movies aka Singham style or more famous Sallu bhai’s Dabangg.

The underlying recipe for all of them – mind-breaking ridiculous actions sequences, larger than life hero, inconsiderate (witty for many) dialogues, dumb storyline, and heroines which are only visible during song sequences.

Some movies work and others don’t – a breather for all, that atleast some don’t.

Sanjay Dutt presently cooling his heels behind barracks, tried to tip-toe into the super cop- world previously in Zila Ghaziabad too where he was rejected outrightly. But he is back with another ‘assault’ on watcher’s senses with KS Ravikumar directed Policegiri. 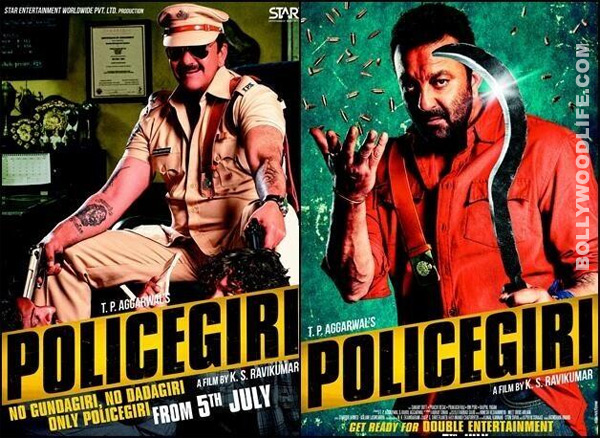 For a film that is as dumb as anything can get, Policegiri cries too much in a screechy-tone. If you can comprehend what I am up to, the flick doesn’t click but surely proffers a kick — on the butts of all and sundry, those who are daring to risk their life with it.

No one can give a guess why the south Indian director went on with the remake of Saamy .Maybe Prabhu Deva is one inspiration down south for one and all.

Coming back to the picture, the protagonist here, Deputy Commissioner of Police Rudra Aditya Devraj (Sanjay Dutt), a cloned version of Chulbul Pandey and Singham, is transferred to Nagapuram after a series of transfers.

He believes in his own written rules (and of course laws) and not even averse to the idea of accepting bribes, if they help in making this world a better place to live in…. wow, this was something!!!

A combo of a cop and goonda (he defines himself in the fashion, so don’t accuse us of this description), he has a funny self-descriptor “buy one get one free.” He is in love with Sehar (Prachi Desai), who is in ever-present dilemma, which way (read religion) to go, as caught between a Hindu mother and a Muslim father.

Half in age (may be even less) to Sanju baba, the couple looks the most ill-paired ever – atleast to me. Also, Prachi is wearing the worst make up on her cheeks that change their color from red to yellow to orange as the movie proceeds – with no pun intended.

He is up against bad man Nagori Subramanian (Prakash Raj) who seems to be settled well in his typecaste ‘Madrasi-goonda’ roles by now.

Then the usual tale follows and bodies flow in air — stuntmen make some bucks, musclemen get beaten by a visibly aged guy (Sanjay) ruthlessly to anyone’s disbelief and fate is sealed finally that movie will follow footsteps of Maha Flop of the year Zila Ghaziabad.

In reality, there is not much to write about and everything is about feeling disappointed only. Rajpal Yadav tries to spice up with his tired comic antics through a poorly framed love triangle (even in comic sense) but to no avail. Actors such as Mukesh Tiwari and Murli Sharma are completely wasted.

One thing for sure Sanjay is a big no-no, especially in an avatar of a brooding police cop with his ground touching eye-sags (though failingly tried to cover them with a Ray-ban) and soulless dialogue delivery.

He should know well that his Vastav days are long over and should follow ‘live and let live policy’ from now on. If producers still feel we all are dying to watch his mundane antics and they can mint easy moolah out of his sympathizers’ wallets, then take a long walk baby! It requires a Dabangg or a Singham to watch the film, as mere mortals can easily be torn apart in this ear-splitting absurd drama.

The writing is on the wall and that too painted in black paint – Policegiri box office par zor se giri.