As elections draw around, bogey of secularism debates surface all around. Right from Prime Minister Manmohan Singh, Congress president Sonia Gandhi, PM designate Rahul Gandhi and latest to join the bandwagon Nitish Kumar, the Bihar chief minister drop everything else to don secular clothes for being rewarded with a crown.

The whole debate finally centers on Narendera Modi, the Gujarat chief minister, who is heading one of the most communally sensitive states for more than a decade. 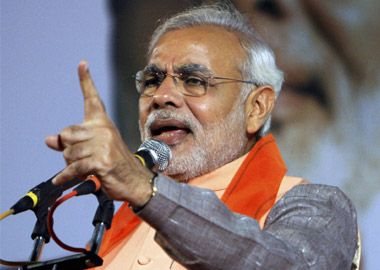 Godhra riots do blemish the image of Modi but is it not a truth that Modi has done something that for more than a decade no ‘communal’ violence has taken place in Gujrat, whereas in other ‘secular’ ruled states communal tensions have run high on many occasions.

Congress’s record is the most suspect. It was none other than prime minister Manmohan Singh, who stated a few years ago that ‘Minorities’ should have preference in government funding for development projects. However, some communal labeled leaders differed saying that first right on nation’s resources were for the poorest of poor.

In West Bengal, a ‘secular’ government is paying salaries to Muslim clerics. Some self-proclaimed secularists tolerate the religious extremism and political irredentism of a section of clerics.

West Bengal Government did not allow famous author Salman Rushdie to land in Kolkata or permit Taslima Nasreen to live in West Bengal because they were opposed by a section of Muslim over writings about Islam.

The Government of India has a mandate to fight terrorism. But it’s success is in doubt when it encourages narrow-minded, religious teaching in ‘Madrasas’ and considers it as equivalent to secular, science and rationality-based education.

Other part is that there are now two education systems which mean that all Indians no longer have a shared worldview. Those educated in madarssas become victims of a mindset that is natural to a blinkered and insecure community.

In Kerala, Congress led government refused to prosecute PDP leader Abdul Nasser Madani even though he was accused by the State’s police of involvement in 2005 Tamil Nadu bus burning case. Is this not enough to understand the definition of ‘secular’?

Same Madani was later suspected to be a key man in the 2010 bombing of Bangalore’s Chinnaswamy stadium.

In Uttar Pradesh, Samajwadi Party Government wanted to release people accused of planning and executing serial bombings but Allahabad High Court intervened and stopped the freeing of the accused.

In Andhra Pradesh, since the Congress came back to power in 2004, there have been repeated attempts to provide special benefits to the Muslim community. But the courts intervened and rejected it.

The 2002 Gujarat riots may be an administrative failure but the riots were a direct outcome of the grave ‘Sabarmati train burning’ provocation. Without justifying Modi and Godhra, politicizing riots or communal issues is not in national interests.

To blame Modi for 2002 does not offer a clean chit or justification for others to adopt appeasement policies under the banner of secularism.

Communalism is a curse but appeasement of minorities and suppressing majority is also anti-national and time has come to learn the difference between ‘Secular’ and Indian. Appeasement to none, development for all should be the motto for any and all Indian governments.