“Kahani ye unki jinhe bhule dono jahan” the ending track in the movie perfectly describes what Nikhil Advani, director of D-DAY wanted to depict through his much awaited espionage flick. 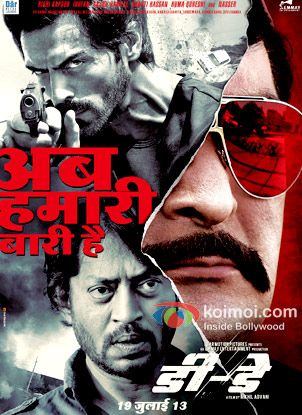 The 153 minute crime-thriller is probably one of the finest made spy-thrillers in the Bollywood history ever. The film does not entertain the typical genres pre-fixed by Hollywood torchbearers such as Munich or Argo but brings forth a fresh unsullied Indianised version.

The research work gone down in the script is creditable. The cinematography by Tushar Kanti Ray, who pulls out a stunner through his camera, is exemplary.

The movie was filmed in Ahmedabad (Gujarat) in open locations and for the remarkable handy cinematography, one can’t figure out the real Pakistan from the fake one; reminiscing Zero Dark Thirty at places.

Everything works out according to plan but all hell breaks loose when the operation plans get leaked out to ISI, the all powerful Paksitani intelligence services, and the ‘hound for the huntsmen’ begins.

Kudos to the scriptwriters (Advani, Ritesh Shah and Suresh Nair) for bringing out something new on the ‘D’ subject; Rishi Kapoor’s performance is at its artistic best and carries over the bastardly villainous act with ease from Agneepath but with a tad-restrain for the character of a Don. The scene where he reprimands father–in-law (to be) of his son by referring him as an apprehensive cricketer finds resonances of D and Javed Miandad.

Irrfan is astounding as a spy who spends 9 years in Pakistan masquerading as a barber and married with a 5 year old kid. Predominantly the scenes with his Pakistani wife (Shriswara), who fits into the role perfectly well, with the child actor, are heart-touching. His role brings out in open the life of an undercover agent on foreign soil, with the emotional and physical hardships one has to go through while serving the nation. There are many who are lost into oblivion once the mission fails.

Movie ends on a suspense note as Irrfan emerges the real frontrunner despite playing a spoilsport for much of the second-half (that is sluggish in pace too).

Arjun Rampal is a revelation and doesn’t get overshadowed by the actors of the caliber of Rishi Kapoor and Irrfan. His rough and husky voice is the biggest strength that makes up for the slow dialogue delivery and stone-faced emotions.

His intimate scenes with Suraiya (Shruti Hasan), a Pakistani prostitute (with a scar on face), create moments that do not blend with the storyline. Shruti has translucently evolved in her small and silent role.

Huma is no Charlie’s Angel or much famed KGB spy girl-type, but plays a smart girl who is a team player. She leaves an explicit mark with her performance. Chandan Singh Sanyal as Goldman’s vicious nephew and Nasser as RAW chief are reasonable.

The dialogues by Niranjan Iyenger will surely find many takers. The music by Shankar-Ehsaan-Loy is refreshing and awe-inspiring. The profound and reverberating lyrics are a stark contrasting to the current trends.

Despite being high on thrill and drama, the movie is not unblemished. The scenes involving Shruti and Arjun are not supported by any need in the script and only stretch the drama. There are times when Arjun’s character goes overboard destroying opponents single handedly, the Robo-Cop style.

What drives RAW chief to constantly support his men despite there being no probability of their success and amidst unvarying antagonism from the department has mush idealism in it?

The 4 spies move about in the city after the attacks without even bothering to camouflage their appearances is filmy. The way they go on an killing spree on Karachi roads cannot be digested easily.

Goldman who could have been done with much earlier but was let loose by Irrfan as he wanted to extradite him back to India alive, but later, Arjun shoots him in head once they cross the Indian border leaves one wondering at what point the story broke down to give precedence to plain drama.

It’s really painful to see the resourceful comedian Rajpal Yadav wasted by dancing insignificantly in the opening song— bringing home what a harsh and cruel world our Bollywood is!

The movie gets 3 ½ stars on the scale of 5 from Hillpost.