Shimla: Urban living in what the British described as the queen of hills continues to deteriorate, as traffic snarls chokes the roads, water supply is erratic, new infrastructure plans are permanently on the drawing board and even though a new municipality with new mayor assumed office a year ago, there is no noticeable change on the ground.

“There is nowhere one can walk in the city as there are no exclusively walking paths in Shimla,” says DS Pathak, a new Shimla resident.

“Traffic has encroached upon all roads even those like the Mall Road that were exclusively marked are trespassed upon by vehicles of all kinds and roadsides of all roads have been taken over for become parking spaces,” he said. 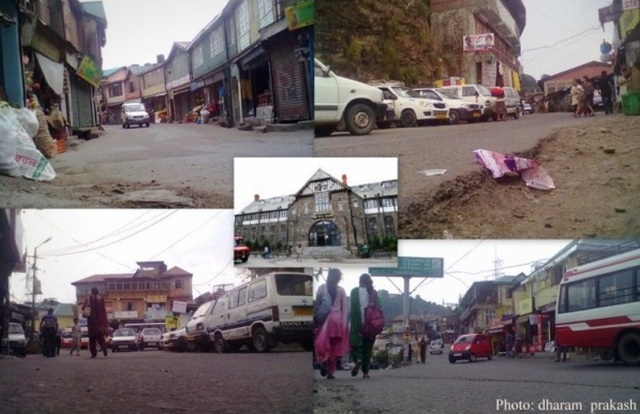 Main markets of Ram Bazar, Lower Bazar, Totu and Boileauganj and many other markets are overcrowded , with street hawkers making the situation worse.

Vice President of the Totu Vyapar Mandal, Surinder Thakur says “the locality has a huge traffic and parking problem. No multi storey parking has been planned for Totu but it partially solve it, he added

Deputy Mayor Tikender Singh Panwar lays the blame at the door of the state government. “There are several issues that need government approval before they can be implemented. There is a lot of responsibility for improving civic amenities in Shimla, he said.

With the councilors, most of who belong to the either BJP or Congress camps, strongly opposed to the mayor and deputy mayor, who belong to CPI (M), functioning of the municipal house is stalled over many important issues for lack of consensus.

However, municipal officials say that a years’ time to bring about change in a system eroded by years of lethargy is reading too much into the new municipalities functioning’s.