Dehra Dun : Come Saturday and 705 gentlemen cadets of the Indian Military Academy here, including 74 foreign cadets from other countries will pass out from the halloed portals of the country’s prime army training centre. And the best all round cadet will like at every passing out parade get the coveted sword of honour. 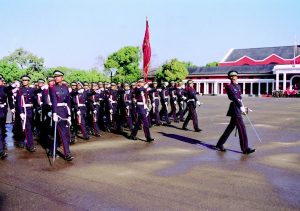 Until World War I Indians were not eligible for commission as officers in the Indian Army. Following the experiences in World War I, where Indian soldiers proved their mettle Montagu-Chelmsford Reforms facilitated ten Indians per year to undergo officer training at the Royal Military Academy Sandhurst.

In 1922 the Prince of Wales Royal Indian Military College (now known as the Rashtriya Indian Military College) was set up in Dehradun to prepare Indian boys for admission to Sandhurst. The Indianisation of the Army started with the commissioning of 31 Indian officers. Among this first batch of officers to be commissioned was Kodandera Madappa Cariappa, who later became the 1st Commander-in-Chief of the Indian Army and 2nd Indian Field Marshal.

Despite demands, the British resisted expansion of the Indian officer cadre. Indian leaders then pressed for the issue at the 1st Round Table Conference in 1930. Eventually, the establishment of an Indian officer training college was one of the few concessions made at the conference so he Indian Military College Committee, set up under the chairmanship of Field Marshal Philip Chetwode, recommended in 1931 the establishment of an Indian Military Academy in Dehradun to produce 40 commissioned officers twice a year. The numbers has since risen dramatically to meet the need of the Indian Army.

Interestingly the sword of honour, which the best of the gentlemen cadets vie for at the end of their training, is made at a local unit here for the last over 20 years. Dehra Dun Has for long been the home of iron and steel works, particularly the manufacture of khukris (Nepalese knives) and other swords and there are a number of prominent houses that have got international recognition in the filed, including that of Windlass.

The sword of honour, made of carbonised steel has a length of 31 inches and a hilt measuring six inches and the process of making the sword starts with its blade on which is made amongst others the Ashoka and IMA symbol, After tempering the steel, it is covered with polish and then given a nickel plating which gives it a perfect finisih.

The manufacturers claim that a 12-member team takes about a week to prepare the sword of honour as it is a meticulous task and it cannot be speeded through. It will be handed over to the Academy today, after work on its has been finished and will be awarded to the best all round cadet on June 8.