Having spearheaded the statehood movement, the Uttarakhand Kranti Dal is a non-entity in the state politics today, making most question what all the violence and protests were for when the issue was being hotly agitated.

Dehradun : The Uttarakhand Kranti Dal (UKD) spearheaded the agitation for a separate statehood for the hill districts of Uttar Pradesh. They literally wooed the people and convinced them that a smaller state, with the hill people at the helm of affairs would usher in a new era of prosperity and development. 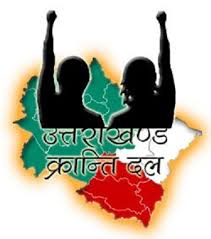 The people fell for the promise hook, bait and sinker and took to the streets. Men and women faced not only the turbulent weather of the hills, but even the lathis and bullets of the police and PAC. Women had to bear the ignominy of also being raped by the men in khakhi. But there was no stopping them and on Nov 9 2000, Uttarakhand became a reality.

But because of the myopic vision of the UKD leaders, coupled with their personal egos, ambitions and rudderless drive, the party that should have been calling the shots in this small mountain state and working to fulfill the hopes and ambitions of the people that they had promised them during the agitation, started decimating itself.

The people who were looking for a brighter tomorrow after the formation of the state, the dream that their children will not have to migrate from their homes in search of jobs in distant towns saw in disbelief as the UKD leaders hurled abuse at one another and were literally at daggers drawn. They started distancing themselves from the people in search of immediate power, which was not coming their way.

The party was formed way back in July 1979 and leaders like Indramani Badoni, contributed their might for nurturing the party and making it the local people’s first choice. But the personal whims of its leaders after the formation of the state, each portraying himself as the only man who matters in the party saw its decoline till in the 2012 vidhan sabha election it could manage to win in just one assembly segment.

And despite various efforts to somehow bring the warring leaders again together on a common platform and revive the party to its past days of glory, the situation only got from bad to worse as almost all and sundry in the UKD took the stand that had it not been for them the party would not have been anywhere.

The party had yet another split with a two day convention being held here recently where Kashi Singh Aeri was elected the new president. However, the former president Trivendra Singh Panwar declared the convention illegal and said that Aeri had no right to become the president as the convention itself was illegal.

Both the Aeri and Panwart groups then fought for the possession of the party office. While Panwar sat on a dharna outside the office Aeri supporters stormed in and took possession, resulting in a free-for all. The police had to intervene in the matter to prevent further bloodshed and asked both groups to practice restrain and take the matter up with the Election Commission.

But for the people of the state, it was virtually the last nail in the coffin of their hopes that had started with statehood. But every time the party split, these hopes shattered and on Monday when there was yet another split in the UKD, the people of Uttarakhand did not mince words and said that perhaps they were better off in Uttar Pradesh than they are in their own state for which t5hey went without food, water and dared to face the lathis and bullets.