The stage is set for the traditional Nanda Devi Raj Jat, a religious 280 kms trek that takes about 20-days to complete scheduled to be undertaken later in August.

Dehra Dun : With Virendra Singh, a resident of Luntra village in Gopeshwar district of Uttarakhand claiming the birth of a four-horned ram, the stage is set for the traditional Nanda Devi Raj Jat, a religious 280 kms trek that takes about 20-days to complete scheduled to be undertaken later in August this year. The four-horned ram leads the pilgrimage. 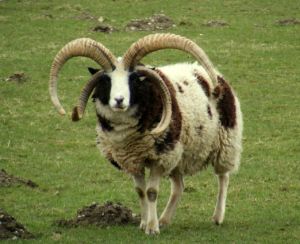 Though Virender Singh claims that the ram which was born at his house about three months ago initially had two horns, but of late two more horns had started sprouting making it a four-horn ram. However, his say will be perhaps the last in whether the ram will lead the Jat, as this will be decided only by the Kunwar family and the priests, but apparently the traditional indication has come.

The three-week long Nanda Devi Raj Jat is one of the world famous festivals  of Uttarakhand. People from not only the Kumaon and Garhwal divisions of this small hill state but other parts of country and international followers, including tourists, participate in Nanda Devi Raj Jat Yatra. Coming once in 12 years, it is a much awaited event.

Parvati (Shail Putri), the consort of Lord Shiva is said to be known as Nanda in the Garhwal and Kumaon areas and as such Goddess Nanda Devi is worshiped at dozens of places in Uttarakhand, but the region around Mt. Nanda Devi and its sanctuary, which falls in the Pithoragarh district, Almora district and Chamoli district, is the prime area related to Nanda Devi.

In Chamoli Nanda Devi Raj Jat is organized once in 12 years. The Jat starts from Nauti village about 25 kms from Karnprayag and goes up to the heights of Roopkund and Homekund with a four horned sheep in the lead. After the havan – yagna is over, the sheep is freed with decorated ornaments, food and clothing’s and the other offerings are dischared.

The Kunwar of village Kansua inaugurates the ceremony. The legend is this that Nanda Devi, consort of Lord Shiva left her village and went to the Nanda Devi parbat (mountain). Therefore when the yatra starts, heavy rain occurs as if the ‘devi’ is crying. This yatra covers many villages and in between the Devi meets her sister in Bhagwati village.

This yatra is very tough on account the landscape it goes through. In between the yatra there comes Lake Roopkund where lie hundreds of skeletons. It is said that once the King took some dancers to this sacred place due to which heavy snow fell and people died and the dancers got transformed into stone which can be seen in Patarnachonia.

The other myth is this that king Yasodhwal’s wife was pregnant, and while she was giving birth to her child, her placenta flowed down to Roopkund and this in turn caused the death of the people at the place. That is why it is said that the river, Nandakini lost her significance and the Nandprayag is not considered sacred as the other Panch Prayags like Devprayag andRudraprayag.

The state government is making ample preparations that the yatra passes off peacefully and the large number of tourists and pilgrims that come to participate in it are not put to any difficulties. Even the governor of the state is monitoring the arrangements being made, as a large number of representatives from foreign media, particularly news channels and film makers come to capture this mega event on camera.

It may be mentioned here that the priests of and committee members of the Nanda Devi Raj Jat had held prayers for the birth of a four-horned ram on Feb 10, 2011 and following the claim by Virender Singh one can see the tremendous enthusiasm all around. In fact people lving in  the immediate vicinity of Luntra have alreadt started worshipping the ram.