Shimla: Beyond hydro power development, agriculture, industry and environment, World Bank was open to including tourism under the Green Growth and Sustainable Development program funded through $ 200 million (Rs 1100 Cr) development policy loan (DPL) is under implementation.

Talking to Hill Post, chief secretary Sudripta Roy said, increasing footfalls at popular tourist destinations causing degradation to environment be it pollution or solid waste management was an issue that World Bank was willing to look into for funding in the second or third phase of the DPL program.

A mission team of the bank consisting of senior executives Charles Cornier and Piyush Dogra is here and to assess the rollout of the program, for which Rs 550 Cr as first tranche was released in January. 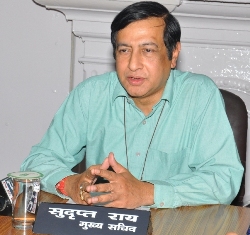 To bring tourism into the ambit, we are preparing a plan of action to be implemented towards providing better healthcare, managing transport, containing pollutions and developing sustainable solid waste management systems, before we approach World Bank for funding, said Roy.

He said the state was ambitious the green growth funding program and was banking upon receiving the second loan tranche by May or September.

In the hydropower sector the loan fund is to be used for ensuring minimal environment damage in an area where a project is executed.

For industry the banks proposal of imposing a green cess on polluting industries was ruled out as it was not permitted under the central government legislated laws, said Roy. But we could draw up a roadmap for the state, should the law of the land change, he added.

To protecting the environment, the government would be adopting 77 watersheds and an equal number of micro watersheds, spread out across the state, said the chief secretary.