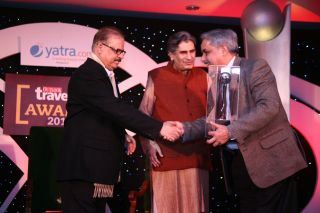 On behalf of Himachal Tourism, Vijay Sharma, a general manager collected the award for Dalhousie being rated the most favoured hill station.

Outlook editor Vinod Mehta was also present on the occasion.

Named for a Lord Dalhousie, the hill station in the northern district of Chamba, was a much favoured destination during British Raj days.