The GMR fiasco has rung danger bells to Indian ears. Maldives government took control of the Male International Airport from the Indian company GMR and shunned away the largest ever FDI, the tourism dominated island nation had ever received in its history with a bold defiance.

Does this indicate weakening of Indian strategic hold in Asia?

India is facing many challenges from China that is belligerently increasing its foothold in the Asian landmass, especially Indian neighborhood.

Considering security concerns of India, Maldives is a very important country in the Indian Ocean. India has sensitive radar installations in the country that are imperative to keep control and track movements in the sea lanes. 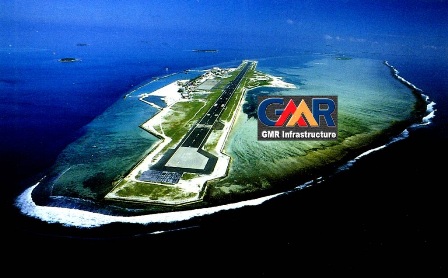 Termination of the GMR project in Maldives is no less than losing the strategic importance in the Indian Ocean and that too, so scandalously and disgracefully.

What India faces in GMR being shown the door by the island country is that China was the main protagonists behind the proceedings and it would not be a surprise if the airport project is awarded to China in the re-bid, even if GMR is permitted to participate in the bidding process again?

No sooner had a new government in Maldives seized power through a coup, India was among the first nations to recognize its existence, despite having had cordial relations with the outgoing president Mohammad Nasheed, a well known Indian loyalist. Though aware of the fact that the new government had a pro-Pakistan mindset, the way India reacted at that point of time is beyond any elucidation.

Maldives has to compensate GMR by paying about $ 800 million. For a total economy of $ 2 billion, such a larger compensation bill renders it abundantly clear that the Chinese would drop in from the back door with monetary help and win the airport project in return.

Energy hungry China is on an incessant hound of oil rich ports in Asia. Gwadara and Port of Qasim in Pakistan, Hambantota Port in Sri Lanka, Sitwe (Akyab) Port in Burma are some recent examples.

China is on a continuous lookout for opportunities in Bangladesh, for setting up garment factories in the country rich in low-priced human resource.

China has provided Sri Lanka with $5 billion in economic, military and technical assistance and has become one of the leading trading partners of Sri Lanka.

Nepal had signed a contract of $.6 billion for a hydropower project that was earlier supposed to be awarded to an Indian company. Maoist cadres have attacked GMR owned hydropower project in Nepal and even other Indian projects are not receiving any serious help from the Nepalese government.

China has its share of troubles in South China Sea

China’s standoff with Japan over the energy rich Senkaku (Diaoyu) islands is one of the dodgiest and volatile issues where India can be at advantage to China. India has already tried to make most of the opportunity by engaging Japan in many economic ties and shared its utmost desire to augment the bilateral trade.

Since 1949, China has been an active party to 23 territorial disputes with its South East Asian neighbors.

Evidently, energy hungry China is involved in the disputes where the islands encompass vast stocks of hydrocarbons and are of strategic location in the region. Its tussles with Philippines and Vietnam in the South China Sea are widely known.

The map that China came up with demarcated territorial lines, as per its convenience, announcing claims to 80 percent of the South China Sea (rich in oil and natural gas) has only complicated the matter further with its South East Asian neighbors.

A deal signed by the Indian state-run explorer Oil and Natural Gas Corp (ONGC) and Vietnam in October for exploring in an oil and gas block in the disputed waters had set off a diplomatic row between Beijing and New Delhi as China is opposed to any such exploration.

India needs to boost its diplomatic relations to counter the rise of a hostile China in the neighborhood by extending hand of friendship towards China’s anguished neighbors.

The time is ideal in reviving quiescent friendships and finding new ones. The new “Trilateral Highway” is aimed at linking the eastern side of India to Burma’s border with Thailand and finally to Vietnam.

The importance of this corridor also becomes eminent as it can link India with the new mounting Asian economies. The new highway will unveil new oil and gas opportunities for India, off the coast of Burma, Vietnam and also allow easier access to Japanese products that are made in Thailand.

India’s engagement with Aung- suu- Kyi (most apparent political leader in Burma to topple the existing military junta) opens its access to Burma in the near future and is a welcome diplomatic step.

DK Joshi, Chief of India Navy, defined the country’s advantage as, “India enjoys an immense geographical maritime advantage over China unlike the territorial frontier. India can dictate terms to China if it boldly aspires to do so on the backing of strong naval force as China’s premier business route finds its way through the India Ocean. Despite China fully aware of the maritime power of India we still are hostage to the timid mindset since defeat in the 1962 Indo-China war.”