Anonymous India has come forward to support cartoonist Aseem Trivedi’s fight against Internet Censorship (Section 66A of the IT Act). The hacking group today brought down the website of BSNL, the largest telecommunication company of the country.

The website was taken down in the afternoon and images of Aseem Trivedi were posted on the home page. The hackers claimed that all the websites of BSNL were taken down by them.

Anonymous India rose to prominence in India when they hacked into Reliance Communications servers in May 2012. 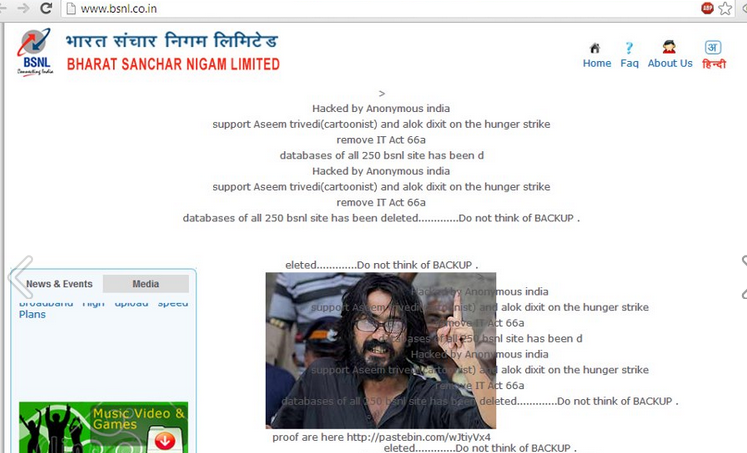 There were warning messages too asking to withdraw the censorship act and urging everybody to support Aseem Trivedi in his fight against Internet Censorship.

Anonymous India also warned BSNL not to try backing up the site. Username and Passwords of the whole BSNL database were posted online at another web-portal (Wastebin.com)

The website was not working until 14:30 P.M. in the afternoon today.

Section 66A of the IT Act is a relevant section which penalizes ‘sending false and offensive messages through communication services’.

Last month, website of Union IT Minister, Kapil Sibal was hacked by the same group which was considered a retaliation against his remarks on censoring the Internet.

In the last few months, debate on the use of the IT Act in general, and Section 66A in particular has gathered momentum across the nation.

Aseem Trivedi, a Kanpur based cartoonist, was arrested on the charges of sedition after he drew controversial images of the Indian constitution and parliament in September 2012.