Dehradun : It has been 12 years that Uttarakhand achieved statehood, a period where the state coffers have been literally ‘looted’ by the babudom. In the normal course one normally hears of original ways that crooks think of to hoodwink the law, in this small mountain state, it is the babudom which shows ways of cheating to make a quick buck.

The Urja Nigam here had placed orders for 1100 electricity poles made of iron. Each pole was supposed to weigh 129 kgs. But after being dispatched from the industrial city of Kanpur in Uttar Pradesh, when the poles reached the state headquarters here, the wight of the poles came down to between 113 to 119 kgs. 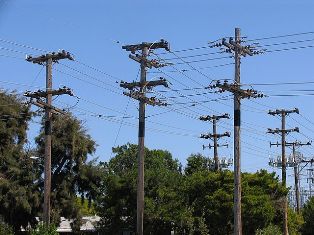 While the blame is now conveniently being switched by one party to another, and who is actually responsible, only an enquiry ordered by the Nigam MD, A K Johari will reveal.

In the meantime to make assurance doubly sure, the Nigam has cancelled the second consignment of 3900 poles that are yet to be delivered.

The Nigam had placed an order with the Kanpur-based company for 5000 poles at a cost of Rs 2.80 crores, which were to be supplied to Dehradun, Rishikesh, Kotdwara, Haldwani and Kashipur divisions of the Nigam.

Officials of the Nigam had gone to Kanpur and selected poles weighing 129 kgs and submitted their report to the top brass.

However, when the first lot of the 1100 poles reached here, the inspection team got suspicious, and weighed the poles in lots of 10 each. They were surprised to find rather than the 129 kgs that the poles were supposed to weight, their weights varied from 113 to 119 kgs.

Senior officers said that the 1100 poles that had been received would be returned to Kanpur.

They said that it had now been decided that in future the National Thermal Power Corporation (NTPC) officials would be taken into confidence for placing orders of poles, but admitted that the officers who had gone to select the poles should have to put markers of the Nigam on the poles to ensure that they would not be changed.