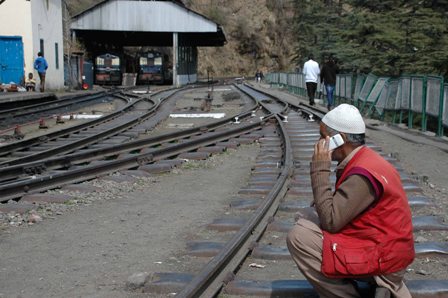 Shimla: Left out in the railway budget again, chief minister Prem Kumar Dhumal said that Himachal Pradesh’s interests were overlooked in the budget presented in parliament on Wednesday and a step motherly treatment continues to be meted out to the hill state.

Reacting to the first railway budget present by Dinesh Trivedi, railways minister, Dhumal said that the union government has not paid heed to strengthening the railway network in the state, even though the strategic importance of Mandi-Manali-Leh track was known.

“The state has been pressing for construction of this important track for the last so many years and a proposal to sending for a Planning Commission appraisal about Baddi-Kalka, Bilaspur-Leh via Kullu-Manali, Ghanauli-Baddi, Ghanauli-Dehradun via Baddi-Nalagarh Jagadhari-Surajpur, Kala Amb-Poanta Sahib railway lines was only a political gimmick that the UPA government had been doing so earlier also,” said Dhumal.

Since Independence, railways has constructed only 44 Kms of track lines in the state, he added.
Even though the railway minister has proposed to construct 45 new railway lines of 700 Kms, upgrade 750 Kms double gauge and 800 Km long narrow gauge railway lines in the county in 2012-13 but there is nothing for Himachal, he said.

The chief minister described the proposed rise in fares as anti people and anti poor as it would hit every section particularly the poorer ones.

However, the Dhumal thanked the minister for extending the Delhi-Una Himachal Express and Nangal Dam Una Himachal Passenger train service to Amb – Andoura that was announced in the budget in parliament earlier in the day.