Shimla : For the first time in the long history of Shimla a unique tradition has been violated and destroyed . And ironically the culprit is the Himachal Pradesh government.

In a mindless decision the over-enthusiastic duo of the DC and SP here have opened the major sealed roads of down town Shimla to allow all motor vehicles in the fragile core area of the town on new year’s eve.

This has shocked and outraged Shimlaites who have never seen such scenes in this scenic hill station which lies at 7,000 ft above sea level and attracts holiday makers from across the globe .

Even during the British era when Shimla was the summer capital of undivided India vehicles were not allowed into these roads . And since then the tradition has continued and become a way of life in the queen of hills. 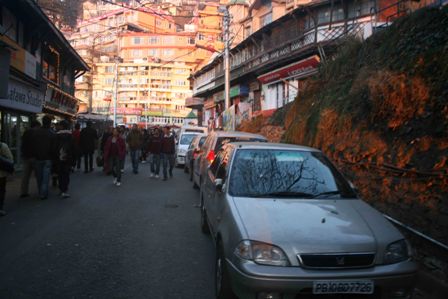 No more a walkers zone

Cars and even motor cycles , bearing number plates of Punjab , Haryana , Chandigarh , Delhi , Uttar Pradesh , and Uttarakhand are parked on both sides of the sealed roads today making Shimla’s down town area look like any chaotic Indian street .

On Dec 30 , the SP Shimla addressed hundreds of policemen deployed in the hill station for new year eve and chalked out a new plan which included allowing all tourist and local vehicles into the sealed routes.

Sources told the Hill Post that this step was taken by the government to ease the heavy traffic load on new year’s eve.

Even as people engaged with tourism and travel business here say this time the new year revellers are far less than previous years .

Angry locals say this bizarre step is unacceptable as for the first time in the history of Shimla traffic has been allowed onto these narrow fragile roads .

We are shocked to see the government take such a mindless decision . The beauty and uniqueness of Shimla remains traffic free roads where the only mode of travel is walking , said Billy Malhans , convener , Indian National Trust For Art and Cultural Heritage (INTACH) .

Locals including senior citizens walk up to 3 to 6 km every day to the Mall . Barring ambulances , fire tenders and an odd VVIP car it is unthinkable to see the entire traffic charge onto these sealed roads , Malhans told the Hill Post .

It is really sad to see the protected roads of Shimla turn into any ordinary Indian street . God save the future of this town . Maybe its time for me to move out of here now, said another regular walker .

Others said they will fight the government to preserve the sanctity and unique way life of Shimla.