The human spirit, Deemed frail,
Often proves, As tough as nails.
And given such, incredible knack
It fights, resists, And bounces back.
Come tough times, And tough blows,
The adrenalin, That somehow flows…
Signals to, The human willâ€”When all is done, Keep fighting still. 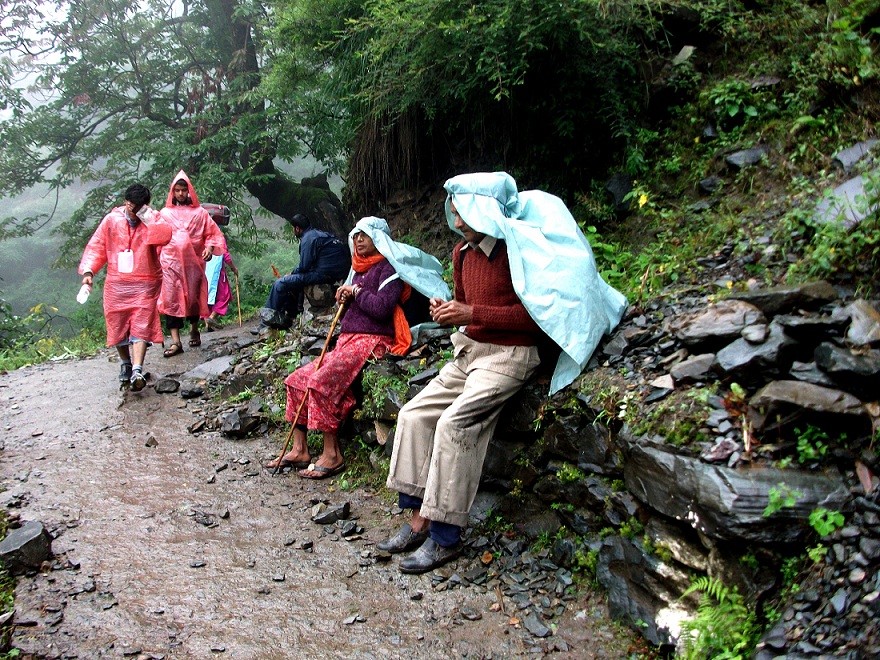 Four consecutive holidays, stock of piled up compensatory leaves were tempting to make another plan for adventure trip. Comes August 2nd week when plan got action, only pang was disapproved leave request. On the D-day when I reached bus stand with no booked tickets, I was startled to see human flood at bus stand (On occasion of Rakshabandhan following day, every brother and sister of north ensured to reach home). For a moment I could feel deadly impact of population explosion, which questioned meâ€¦ are we surpassing Chinaâ€™s record of maximum population?

Driven by punches and pushes of the crowd, I managed to reach the queue than ticket counter to get information; in day time no bus service is available to Chamba (oldest town in Himachal which exists from last 1000 years), so forgetting about Mani Mahesh Lake in Bharmour. I said chap!â€¦â€¦.rising early went in vain and thought of returning home.Silver lining, a glimpse of moving bus with Pathankot board brought hopes back. I ran and was lucky enough not only to catch bus, but fetch a seat as well, idolizing PT USHA since childhood, worked outâ€¦â€¦â€¦.;)

Peeping outside from isle seat I started my 17 hours long journey with uncertainty of next bus availability clouds hovering sky, drizzle and ears plugged to country music I was enjoying my journey. Broken flooded roads though kept reminding me of corrupt officials misusing our tax money. From half awake state a heavy blow, opened my eyes and here we reach Pathankot. After 50 years Tigers may be endangered species in Indian zoos but 1957 styled Autos still make their presence felt not only as mode of communication to Pathankot commuters but also with its unbearable noise and smoke. 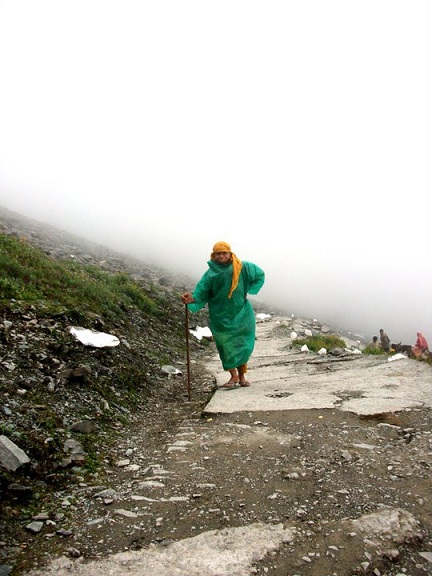 Sigh of relief, getting next bus to Chamba was easy. In contrast to Punjab roads, well maintained roads of Himachal was a pleasant surprise. Bright sunny noon with patches of clouds on the way to Chamba were delight to eyes. After taking halt at Chamba, next day early morning in drizzling, chilled weather, boarded fragrant and smoky bus from burning rose incense sticks to Bharmour. Passing every curve of passage we were heading to steep hill, Ravi flowing in the adjacent and NTPC operations at various sights were spectacular.

Looking down into river Ravi from bus was thrilling and quivering experience at the same time. Reaching Bharmour, my cell phone was dead with no signal reception but seeing my friends brought a big smile on my face, where we made a plan for the day. Due to heavy rains, bridge on the way to Mani Mahesh lake collapsed so we averted trek to explore, Churasi Temple, which was built approximately in 9th century having 84 idols of Lord Shiva.

Next day, on misty morning, playing with rain droplets with our water repellent apparels, knapsack, we bootstrapped our hiking boots, with most colorful accessory of trekking, rainbow umbrella in hands to go on with collapsed bridge. Fortunately, we could cross the broken bridge which was under construction. After ringing the bells hanging from the large gate we started the strenuous trek to Mani Mahesh lake from Hadsar. Delicious langar breakfast was USP of the morning. The track was slippery which made it little bit hard to walk. Unquenchable enthusiasm of small kids, teenagers, married couples, old people, sick people and all wide spectrums of people from diverse background kept us going. In a short break while sipping tasty hot langar masala tea our Scottish horticulturist group mate showed us sharp prickled life saving flower, Thistle which is national emblem of Scotland which has its relevance in Scottish war for saving wars heroes based on which, Mel Gibsonâ€™s epic war film Brave heart was made and has reference of the flower. Having little knowledge of Botany, beside Thistle, Birch tree was one which I could identify. During our tiring moment, loud sensational sound of stream flowing along with the passage was not only music to ears but kept us bucking up. After grueling day, reaching halfway at Dhancho to our base camp we were all jubilant at our endeavor. At evening till late night singing and dancing beside campfire, we melted dayâ€™s fatigue and much accumulated corporate stress. 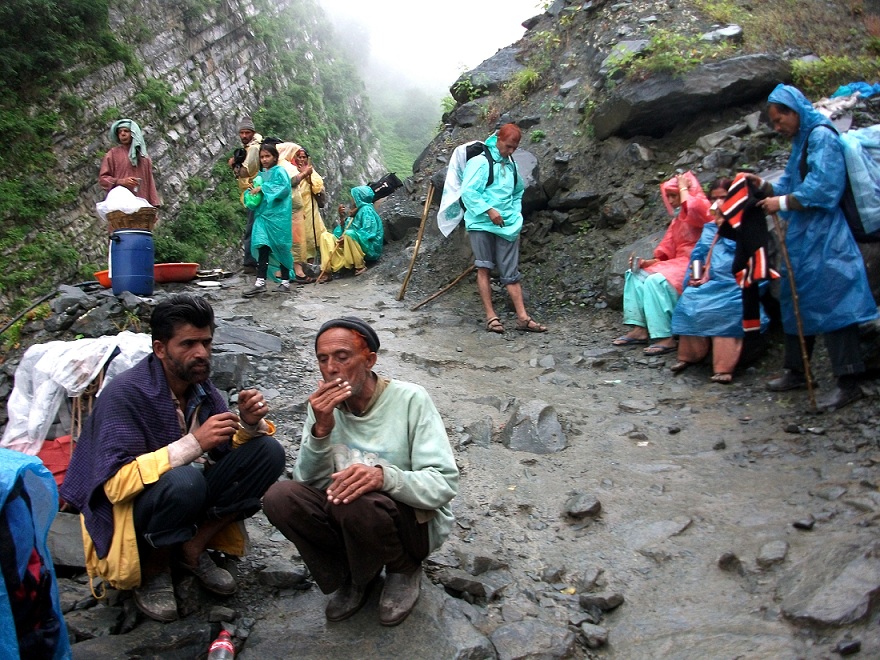 All geared up to reach Mani Mahesh Lake as our goal we started our trekking early in the morning with reducing oxygen level at every step. Unexpectedly, the zig zag steep trail above Dhancho turned out to be scary and dangerous to tread at some levels where landslides, glacier, steep slippery passage run down chill down our spine. A small careless step could result causality. Very carefully we were taking every step and were mentally prepared to survive ever changing weather from bright sunny day to dark cloudy to drizzling or heavy raining weather. In spite of extreme weather conditions, the high spirit of nearly 8 lakh people who visit lake every year was an inspiration in many ways.

At 4,080 meters above sea level, about 15 minutes before Mani Mahesh Lake, shining snow on Mt Kailash which was visible made our steps faster towards lake, where I was amazed to see, an old lean lady, climbing mountain with energy which can bring a teenager to shame. Looking at her energy level and high spirit, my misconception of only youngsters associated to adventure sport was taken to bay. At mountain top, all googled pictures of Mt Kailash peak, lake, meadows and mountains came alive. We were spell bounded by natureâ€™s marvel looking downward. The reflection of Mt Kailash peak in the lake and to be in sync with nature was orgasmic experience.

Paying anjali (gesture of respect when the hands joined and slightly hollowed are raised to the forehead) to lake we took holy dip in icy cold water at Gauri Kund which is believed to purify soul. While filling pure holy water I sympathize to everyone living on mineral water, wish I could take pure, fresh water of lake to every near and dear ones who cannot make to Mani Mahesh Lake. Exhilarated and calm at the same time, after spending few hours at lake, we returned back to our base camps. Like Bandsmen who were heroes of Titanic, 24X7 hours langar service provider, poachers, pony riders were heroes of Mani Mahesh pilgrimage, who ensured every pilgrim/trekker to have proper meals and safe journey.

Returning back, next day, with joy of accomplishment, enlightened facing heavy crowd of people at entrance gate while ringing bell each pilgrim with full faith in themselves were sayingâ€¦In spite of all hardships, hindrances, problems what makes the world go around… its THE HUMAN SPIRIT!!