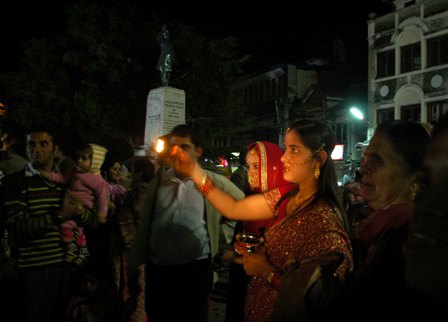 Shimla: With about half of the workforce in government officeâ€™s on a official holiday and all men folk asked to pitch in their best, voices of resentment could be heard in the chaos of what made for a working day for some and time off to fast and offer prayers for the women.

Like today, he went on, the equal work; equal pay principal is skewed up and even the chain of commands is broken because with the women on a holiday, many files and other paper work for which they are responsible for donâ€™t move for the day.â€

With the women keeping away from office, the normal rush hour in the morning and evening public transport buses was not there.

Diwan Chand, a regular commuter felt better reaching workplace early. â€œMuch of crowding and unemployment problems would stand solved, if the women remained homemakers and the men could earn enough to run the households,â€ he said.

The government largesse does not extend to just granting a special holiday for women, it also entitles them for free travel in government buses for the day.

Though chief secretary Rajwant Sandhu is said to have attended office, but the corridors of power at the civil secretariat were devoid of other women employees.

With the women having fasted all day for Kava Chauth – a festival celebrated for the well being and longevity of their husbands, by evening, dressed in bright bridal dresses, rows of them headed out for the closest mountain spur or ridge in order to view the full moon rise over the horizon so that the starving day could at last be be ended.

The Ridge Maidan, in the town centre was the most crowded place with the cityâ€™s whoâ€™s who bedecked and ornamented to celebrate the evening. Its only after having seen the moon that the auspicious fast can be broken

“Itâ€™s a day when the husband pampers the wife,” said Sujatha, a working woman. “The government declaring it a special holiday for women, only makes the occasion that much better,” she added.