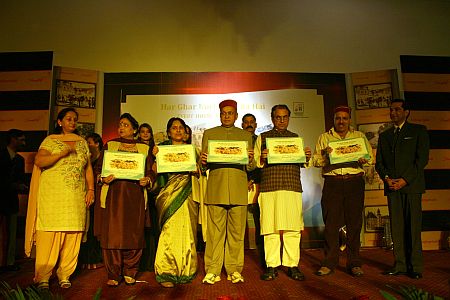 Shimla: Rich with incidents that marked important events in the history of the sub-continent, chief minister Prem Kumar Dhumal unveiled â€˜Har Ghar Kuch Kehta Hai, a coffee table book compiled by the tourism department that documents many heritage buildings and the historical importance they hold.

Speaking on the occasion, Dhumal said that even before the book came out there were queries from television networks showing keenness in serializing the events related to the various buildings mentioned in the book.

Shimla is a city that has played an important role in the history of the country and most heritage buildings some of which are over a century old have a story to tell that the book has partially fulfilled.

One of reasons for compiling the information was to arouse the tourists curiosity, so that he may go exploring the city for its heritage value and another was for recording it all for future generations, said the chief minister.

The maiden endeavour of the tourism department would be supplemented by additional information and interesting facts and figures connected with the heritage of the century old houses in the town.

Next in line was â€˜Har Gaon Ki Kahaniâ€™ that would catalogue rural tales of the thousands of villages in the state.

Places adjoining to such historical places would be developed by associating local people and hospitality industry, he added.

He said that various tourism promotional schemes had been started in the recent past, which included the home stay scheme so as to acquaint visitors with rural life style, local cuisines, culture and traditions.

Himachal Tourism Corporation had come up with a novel â€˜Beti Hai Anmolâ€™ package to attract parents to visit the state with their daughters. Himachal Tourism provides a dayâ€™s free stay in any of their hotels on a two day stay, if the parents are accompanied by their daughter, said Dhumal.

Efforts were afoot to link rural tourism promotional activities with the ongoing MNREGA programme so that it could bring direct benefit to the rural areas by creating additional avenues of income at their door steps.

The states efforts in promoting tourism had won Shimla the best hill destination award from CNBC network for the 4th consecutive year, he said.

In her welcome address. Manisha Nanda, Principal Secretary Tourism, said that â€˜Har Ghar Kuchh Kehta Haiâ€™ was a unique publication of the department which was not only well documented but contained authentic information as well.

Efforts were being made to identify all historical buildings in the town and dig out the historical facts for publication. The book would also be beneficial to the research scholars and history lovers in updating their knowledge about the town, she said.

Aurn Sharma, Director of Tourism and Civil Aviation in a presentation gave details of the historical background of the concept and motive behind theme book.

The publication was unconventional one and through history, stories and folk lore seek to create a new platform for tourism, he said.

Facts brought out by the book included notification of Indian Air Force at Shimla on October 8, 1932, Indian Railway Design and Standard Organization Wing housed in Ellerslie building, Mahatma Gandhiâ€™s longest stay at Manorville, the First Afghan war declaration at Shimla in 1838, General Mohammad Zia-ul-Haque, the 6th President of Pakistan having been a student of Government School, Lalpani and drawing of the famous McMohan Line that demarcated an international border, said Sharma.