Temples between Naggar and Gojra on Left Bank of Beas
Penelope Chetwode undertook two treks from Shimla to Kullu Hills on hill ponies: once in September 1931 when her father was Commander-in-Chief of India. The second trek was in 1963-64 when she returned to India after more than 30 years. Penelope insisted to ride the pony even during her second journey from Shimla to Rohtang though most of the trek-route had been widened for lorries and buses to ply. Her book, Kulu, The End of the Habitable World switches effortlessly between the descriptions of the two treks. The narrative mostly contains her impressions of nature, pahari culture and excellent descriptions of pahari temples. Interestingly, she refers to herself as a mandir-mad traveler.

In her own words, â€œThe twelve-mile walk or ride from Nagar to Manali is among the most beautiful in the world. To begin with the fertile valley is nearly a mile broad, but it gradually narrows as the mountains close in on either side. Torrents tumble into the alder-shaded river in a series of waterfalls and the track leads over frequent bridges through several villages with step cultivation in between and occasional deodar forests. At the northern end there is a great mountain wall, topped the snow ridge above the Solang nala, to the right of which is 13,400-feet Rohtang Pass. â€œ

In January 2009, I decided to walk the walk which Penelope walked about 45 years back. I had seen and photographed some of the temples during my earlier visits to the area. However, Penelopeâ€™s well researched book provided me a lot of information to make a systematic effort to see the present state of the temples.

I started my walk from Mansari on the main Highway to Gajan village, now connected by a narrow link road. The road construction in these mountains has resulted in â€˜ribbon developmentâ€™ i.e. construction of establishments along the sides of the road. Most of the houses close to road are now concrete structures with flat roofs. During her second trek in 1964, Penelope notices that the appearance of buildings is being â€œspoilt by the substitution of corrugated iron roofs for the original precipice-slice tiles.â€ The landscape is still serene but being rapidly consumed by the cell phone towers and the towers for electricity transportation. The coming of hydel projects and roads have worsened the situation. Only such villages/houses which are away from roads are now left with slate-roof houses built in the indigenous timber-bonded style of Western Himalaya, which consists of alternate courses of dry stone and deodar beams. 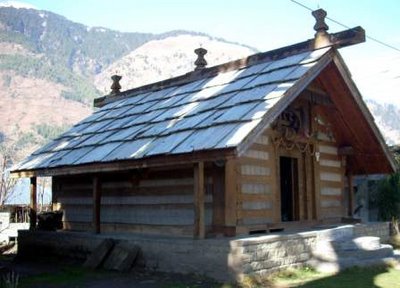 During her 1964 trek, Penelope tried to visit this temple but could not locate it. Later in 1979 and then in 1983 a French observer Ms Helene Diserens visited the temple and published her comments in Central Asiatic Journal. Another French Traveller Mr M. Postel visited this temple and wrote about it in his book Antiquities of Himachal. Dr Laxman Thakur of Himachal Pradesh wrote a short paper on this important temple in South Asian Studies in 1991. 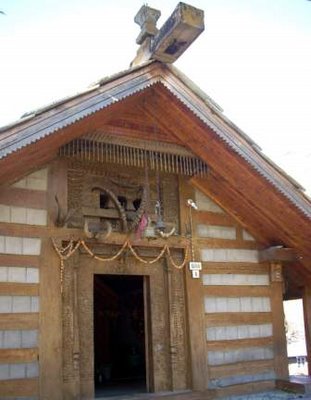 The temple of goddesses Docha and Mocha is single-storied, constructed in alternate courses of dry stone and deodar beams on a rectangular ground plan. 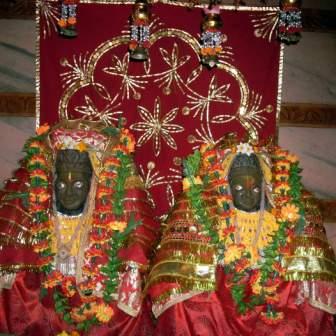 The stone sculptures of goddesses are kept in the garbhagriha or sanctum sactorum of the temple. The two tankri inscriptions on the masks from nearby Karjan village confirm the name of Docha and Mocha goddesses. 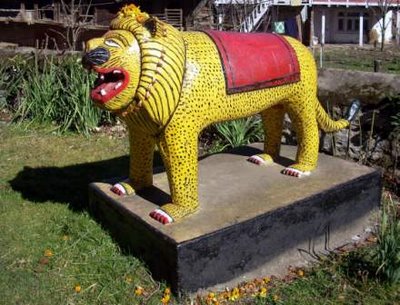 It appears that the temple has been renovated recently. Remarkably, it has a lion (vehicle of Durga goddess) in the courtyard of the temple. 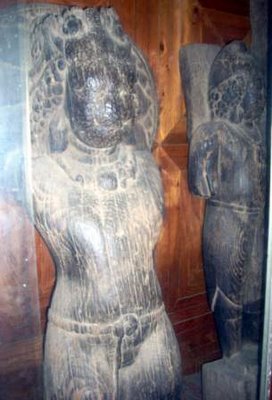 However, the most important part of the temple is six wooden sculptures which were either part of this temple or some unknown one. Recently, a new temple has been constructed very close to the Docha-Mocha temple and the wooden sculptures have been placed in a glass showcase. There are two male and four female deities. The main male sculpture (largest one) has been identified as Surya and the other male is his attendant Dandi (Diserens and Postel). However, Dr Laxman Singh identifies the later sculpture as Kuber, the lord of wealth. Both the male sculptures are carved as stand-alone statues while the four female carvings identified as Yakshis appear to be part of a pillar or wall of the temple. Chronologically, Diserens dates two male sculptures to ninth century and females to 10th and 12th century. Postel ascribes date of seventh century, i.e. post Gupta period to these sculptures. There are about four other stone idols stored in the new temple which need to be researched and dated.

Dr Hermann Goetz (1898-1976), a pioneering Indologist, wrote a beautiful book The Early Wooden Temples of Chamba and referred a lot to the temples found all over the Western Himalayas. He assumes that the statues of Docha and Mocha represent Scythian donors (late Gupta period)which are now worshiped as devis. On the day of Full Moon (Poornmasi) in Chait (March), a village fair known as Chacholi Mela is celebrated by the inhabitants of Gajan and Karjan villages. 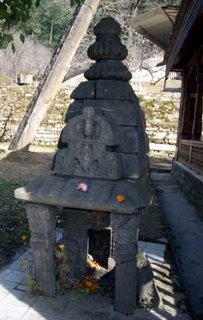 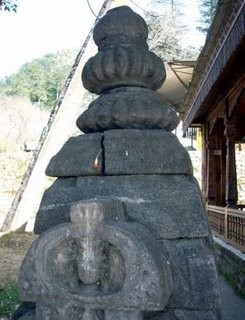 It shares the compound of Vishnuâ€™s chalet type temple and three tall sacred poles (see below). 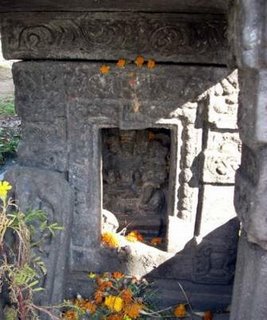 The small temple contains images of Shiva and Parvati. 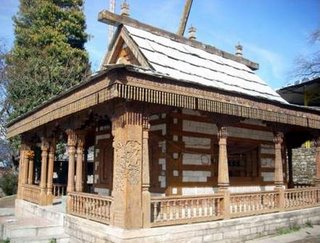 From Gajan, I climbed up from one terraced field to another enjoying the Solang Nala mountain view to reach the road-side village of Sajla. Four big cellphone towers have come up in this village (may see the picture on top of this blog posting). A small link road took me to the base of one the towers where I could see the beautiful temple of Lord Vishnu. 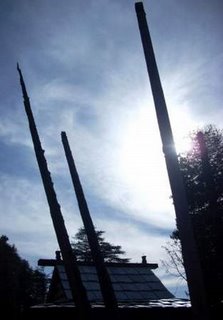 The compound of the temple is quite spacious and houses three tall sacred poles (locally known as Dhwaja), each denoting the occasions of renovations and re-installation of the deity. The pole is usually extracted from a huge Kail tree (Pinus wallichiana). 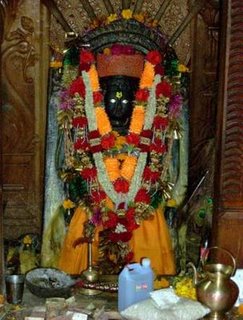 The chalet type temple with the Vishnuâ€™s idol in its sanctum sanctorum has been renovated recently by the villagersâ€™ contribution. 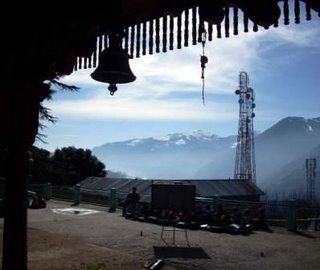 In afternoon, when I reached there, I could see the school classes being held in sun in the temple compound. A village fair is held here in the month of May.
Kartikey Temple, Khakhnal (Type 2)
Only about a km ahead of Sajla, on the main Naggar-Manali road, I had to climb up the village of Khakhnal to see this chalet type newly renovated beautiful temple. The location of the temple is simply breathtaking as I could have the full view of the mountain range above the Solang nala. 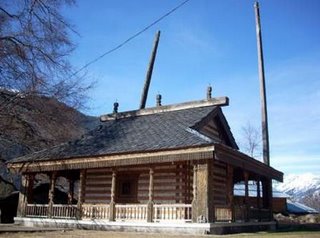 The temple has two tall poles in its compound denoting the renovations that it has undergone. 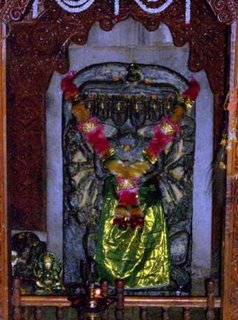 Next to Kartikey, I could see the image of Ganesh, his brother. 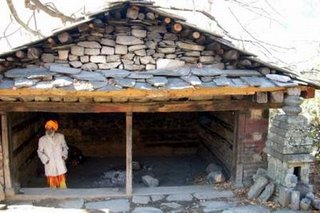 Close to the front door of main temple, there is an open hut for a Sadhu. As a coincidence, I could meet Baba Dhyan Giri, the current occupant of the Sadhu Hut, who told that he came from Rameshwaram (Tamil Nadu), now living in Himalchal for past 19 years visiting and meditating in various temples and forests. Baba narrated the story of Kartikey as son of Shiv and Parvati with six heads, twelve hands but one body, all shown in the image in the sanctum sanctorum of the temple. 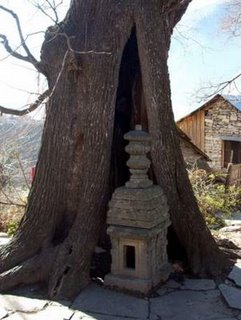 There are two Shikhar stone temples (Type 1) outside the main temple. One of them is almost in the hollow of a tree while the other one is next to the Sadhu hut. Another Chacholi Mela (village fair) is celebrated on the same date of FullMoon in March, simultaneously in five villages of Gojra, Khakhnal, Bahnu, Banahara and Jagatsukh. 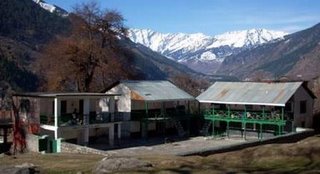 Good to see the village school in progress, quite close to the temples sharing the magnificent backdrop of Solang mountains. 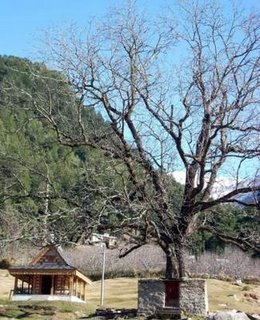 Baba also pointed out to a newly constructed temple of Devi on the slope above the Kartikey temple.
RamaSita Temple, Gojra 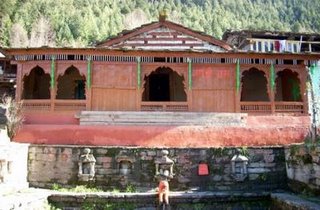 From the Kartikey temple, I came down to the main Naggar-Manali road and walked about less than a km to reach the adjacent village of Gojra. 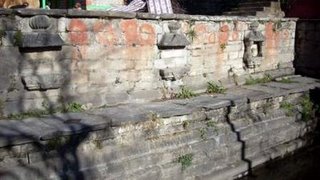 The temple has a nice large stone tank, the three sides with niches for images of deities. 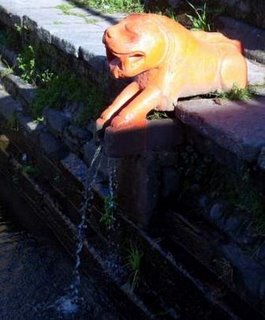 Penelope mentions, â€œâ€¦a large stone tank-full of watercress-to the right of the road, with carvings of the god Narsingh along the backwall. On either side are small sculptured panels showing the lion avtar of Vishnu and a lively nag (serpent) scene, while a vigorous pahari stone lion stands astride the spout which feeds the tankâ€. 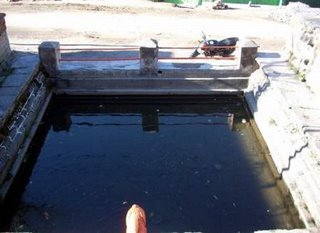 On a careful observation, I could locate only Narsingh carving towards right of the lion spout. Most of niches now empty, I could not see any serpent. 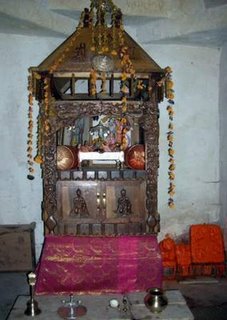 I visited the temple of Lord Rama above the tank. The SitaRam temple is a chalet type temple with idols of Rama, Sita, Laxman and Hanuman.

Read More on my Blog

Sanjeeva Pandey is a forester, environmentalist and an active conservationist who was instrumental in attaining the World Heritage Status for Great Himalayan National Park (GHNP) in Himachal Pradesh. He lives in Shimla