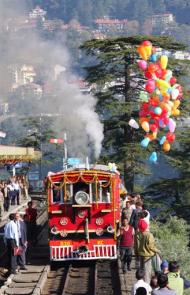 Shimla: A major tragedy was averted when two bogies of a holiday special Kalka Shimla train derailed on Sunday morning and got stuck between a hill gully, killing one person on the spot and injuring three others.

There were about 30 passengers in the train when the accident occurred, he added.

Surinder Singh, a resident of Mohali died on the spot as he got trapped between the bogey and the hillside to which the train tilted after it came off the tracks, said Kanwar.

Preliminary investigations are said to hold over speeding as a possible reason for the train getting derailed. Railway authorities who are inquiring into the accident cause have not ruled out mechanical failure on the over hundred year old hill track.

Luckily the derailed train came stuck between a hill gully which prevented it from rolling into the valley, police said.

Keeping the festive week in mind, the holiday special trains were started a day earlier only, sources said.

The Shimla-Kalka track laid out to military specifications began operations in November 1903 and was declared by UNESCO a world heritage track earlier this year.