Auckland House School is a name to reckon with in the list of illustrious educational institutions in Shimla. Established in 1866, it is one of the oldest institutions in Shimla. With its roots firmly grounded in more than a century old tradition, the School is progressive in its outlook and offers unique opportunities to its students to mould them into successful individuals.

One such opportunity is a unique student exchange programme. It initiated with the Principal, Mrs. Sunita Johnâ€™s visit to Geissen in 2002 but came to fruition only in 2006 when three girls from Auckland House School visited Leibigschule in the month of September. The following year, two German students, Meike and Johanna visited Auckland House and became a part of the â€œAuckyâ€ family.

In continuation of the cultural exchange programme this year, Auckland House sent three XII Formers, namely, Swati C. John, Tanvi Ohri and Sameera Chauhan to Leibigschule, Germany. The girls landed there on the morning of 20th October with much excitement and a little apprehension in their hearts. They were escorted to the school by Mrs. Jutta Becher to the school where they met the Principal, Dr. Seherliess and their host families 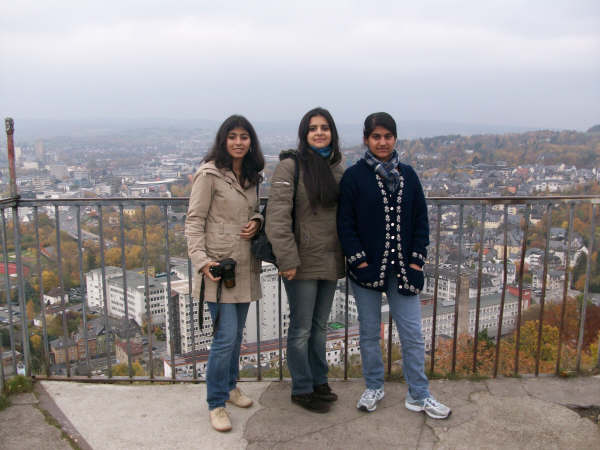 Apart from attending regular school in Germany, the students thoroughly enjoyed the social and cultural life there. They learnt new subjects like Politics, Music and Religion and enriched their knowledge about German Literature by witnessing the dramatic representation of Danteâ€™s â€œDivine Comedyâ€, and paying visits to Germanyâ€™s literary legends Goethe and Schillerâ€™s hometown, Weimar. â€œThe lack of a school uniform and a regular school assembly were the first things that struck us when we started attending schoolâ€, says Swati John, the Head Girl of Auckland House School. The girls actively participated in group discussions and enjoyed leisure activities like ice skating and sight seeing.

Germany is well known for its scenic beauty and the girls visited popular tourist destinations like Laubeck, Scheffinberg, Lich, Wetzlar and Frankfurt during their stay in Germany. According toSwati John, â€œThe boating tour on the river Rhine was one of the most memorable experiences of my lifeâ€. They also celebrated Diwali, which is known as â€œLichterfestâ€ in Germany, with the Indian community settled there.

As young ambassadors of their country and the school, the girls presented a slide show to the German students. The students were quite amazed to know about the diversity in India and the modern technological methods like the Smart Class Programme utilized by Auckland House to impart updated education to its students. Many of them showed a keen interest in visiting India and becoming a part of this culturally affluent country. The Auckyites presented a fusion of Classical, Punjabi and Rajasthani dance forms on the last day of their stay, which was greatly praised by both teachers and students of Leibigschule and covered by the press of Germany.

The School has also initiated an exchange programme with St. Maryâ€™s School, Johannesberg, South Africa this year when the present Principal, Mrs. Meg Fargher visited Auckland House with her mother in law, who is incidentally an old student of this school. Kate Stevens , who visited Auckland House from the 19th of October to the 6th of November proved to be an excellent ambassador for her school.

â€œExchange programmes encourage a feeling of respect and camaraderie not only among the students of participating institutions, but also among respective countries which is very essential in a world fragmented by petty conflicts. It gives a good opportunity to the students to get a feel of a different culture and also to exhibit their ownâ€, says Mrs. Sunita John, Principal, Auckland House School. This cultural exchange programme is a pioneering step in the field of education and a landmark in the history of the School.