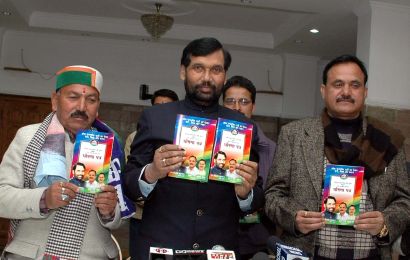 Releasing the document, Ram Vilas Paswan, party president said the party was contesting on 50 seats and was in contention in many of them.

Demanding free electricity the farm sector, he said that as most people in the state were engaged in agriculture or horticulture, free electricity would help the farming community to tide over rising costs in the farm sector. Should LPJ have a stake in government formation the party would work towards a free power regime for farmers, he said.

Expressing concern at growing feticide, Paswan said that to contain the problem the party and encourage people to raise daughters, the party proposed to deposit a fixed amount of Rs 15,000 for every girl child born in the state.

About the commissions extracted from producers at the Delhi fruit and vegetable market Paswan said that LPJ was against such illegal extractions.
Paswan, who is also the union minister for steel and fertilizer, mentioned that the Steel Authority of India (SAIL) would be setting up a Rs 250 crore steel plant in Sirmaur. Plans for laying a foundation stone in November had to be shelved because of the state elections. He said that new plant would help to provide over 4000 jobs to the people

Seeking an enhancement of daily wages for workers, the manifesto sought to raise daily wage earnings to Rs 125. Encroachments on government lands especially of the landless people would be regularized and government lands in the form of nautor would be given to people, said Paswan.

To protect the environment LPJ seeks to get the constitutional provisions enforced in the state. For protecting crops from wild animals, especially monkeys, the party intends to formulate a special plan to contain animals under the wild life protection act, he said.

In a house of 68, the Lok Jan Shakti party won a lone seat from Nahan in Sirmaur district in the 2003 elections.