Setting a rare example of â€˜peoples action for the developmentâ€™ by crossing all the social, cultural and area boundaries , thousands of resident of Himchal Pradesh and Uttrakhand have joined hands to develop Choor Dhar Hills known as heaven of adventure tourists and trackers all over country. For the lacs of residents of this north part of country, mainly people of Sirmour. Solan and Shimla districts of Himachal Pradesh, Morni Hills of Haryana and Jounsar Babar tribal belt of Uttrakhand, it is a holy religious place dedicated to Lord Shirgul, the incarnation of Lord Shiva. 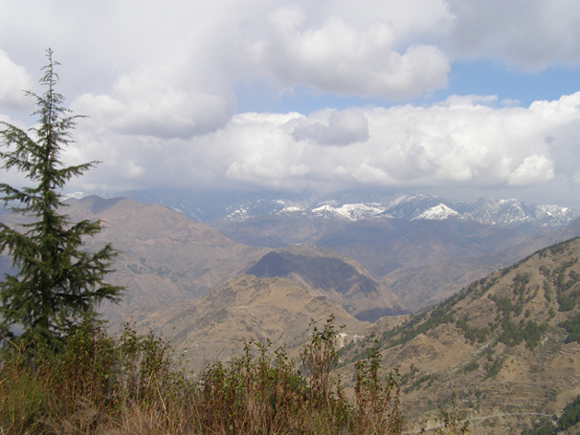 Chooreshwer devotees of this Northern part of the country have united under the banner of Chooreshwar Sewa Samiti headed by a leading social worker of Sirmour district Prof Amar Singh Chauhan. The committee has spent over one crore of rupees out of their hard earned money for the development of this pious religious place and to provide twenty four hour Bhandara for the visitors at the hill top during past six years. The Samiti has over five hundred volunteers dedicated for the development of this Tirth.Situated at a height of 11,700 feet above the sea level the white capped snowed Chood Dhar hill of Himalayan range according to Purans is dedicated to Lord Shankra. The most famous temple of Lord Shirgul which is more than five thousand years old is the main attraction for the visitors on this hill. According to the cultural history of this Himalayan range Lord Shirgul is the main Devta of this Himalayan range who is worshipped as true incarnation of Lord Shankra. Lord Shirgul is worshipped as Kul Devta by over ten lacs families of Himachal Pradesh, Uttrakhand and Morni hills of Haryana. In these area over five thousand big and small Shirgul temples were situated, some of them thousands of years old. As per the residents, the number of these temples were on an increase with the people preferring Shirgul temples in every area.

The Choor Dhar Tirth is officially looked after by a temple committee chaired by Sub Divisional Magistrate of Chopal. When contacted a spokesman of Temple Committee at Chopal told this reporter that over two lacs of tourists and devotees visits the shrine every year between the month of April and October. Due to heavy snowfall which always over 26 feet on the hill, the Kapat of ancient temple is closed in the first week of November and the temple is opened in the month of April every year.

The spokesman told that the ancient temple and beautiful Choor Dhar Hill which is full of fauna and flora was being developed by the government as religious tourist place under the tourist circuit programmee. The new temple of Shri Shirgul Devta was under construction with an estimated cost of over rupees one crores of rupees. When contacted Mr. Sandeep Negi, SDM Chopal, Chairman of temple committee said that Choor Dhar was one of the biggest Tirth and famous tourist place of the area. Government and temple committee were doing lot of work for the development of this place.

Prof Amar Singh Chauhan, Chairman of Chooreshwer Sewa Samiti said that welfare of devotees visiting the shrine was the main object of the Samiti. He said that it was a rare example in this area that the residents of two states have joined hand for the development of a religious place. Samit has its units at a number of places in Uttrakhand including Vikas Nagar, Kalsi and Chakrauta apart from Shimla, Sirmour and Solan dlistricts of Himachal Pradesh. He disclosed that Samiti was spending over five lacs every year for providing free food to the visitors at the shrine complex. Samiti has constructed a big Bhandara hall and 19 rooms for free lodging of visitors at the Shri Shirgul shrine complex at Choir Dhar, a Sarai with the help of government had been constructed at the Nohra village, the foot of Choor Dhar hills for the comfortable stay of devotees and tourists. The Samiti at its own has taken up the project to construct 14 K.M. long road from Nohra Dhar village to Kharech to reduce the on foot distance to Choor Dhar. The Samiti has already constructed three K.M. of motor able road out of it. Now, Chief Minister of Himachal Pradesh Mr. Vir Bhadra Singh has assured to get remaining of road construction work done by the PWD Department. He said that the Samit had prepared a master plan for the complete development of Choor Dhar by protecting flora and fauna and valuable medicinal plants of the area. He added that with the help of government the Samiti was implementing a number of projects worth rupees several lacs to provide basic facilities for the visitors of this area. He said that for the past four years a steep increase in the number of visitors at Chooreshwer shrine has been recorded. He said that to protect this hill from the garbage thrown by tourists was a big challenge of the time.

Tourists going from Shimla side has to reach at Sarahan in Chopal Tehsil where famous temple of Bijat Maharaj is situated. From Sarahan it is 9 K.M. steep foot path for Choir Dhar Hill which takes more than three hours to reach at the Chooreshwer shrine. From Sirmour side the main path to the shrine is from Nohra Dhar village in Sangrah tehsil, the on foot trekking from this side take around six hours.