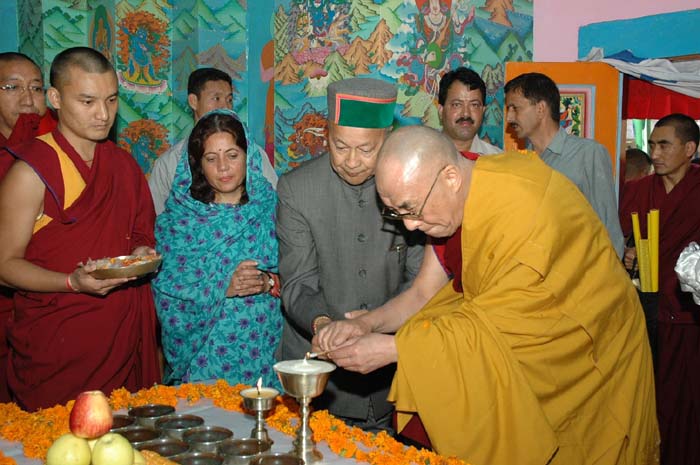 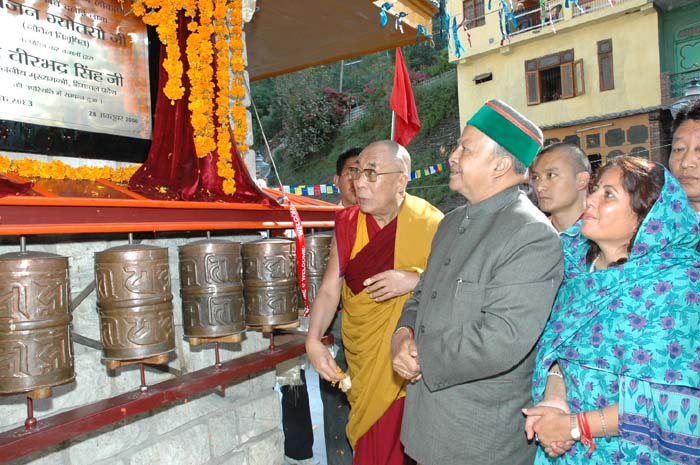 Nobel Laureate His Holiness Dalai Lama today consecrated the ancient Thungyur Lakhang Buddhist Gompa amidst enchanting of holy â€˜Mantrasâ€™, prayers and traditional musical instruments in the presence of Shri Virbhadra Singh, Chief Minister, Smt. Pratibha Singh, MP and senior monks assembled from a number of prominent monasteries to mark the ceremony at Rampur Bushehar coinciding with 2550th year of Enlightenment when Prince Sidhartha attained Budhisatva and become Lord Budha.
Delivering the sermon to the devotees assembled from different parts of the State, His Holiness Dalai Lama dedicated the centuries old restored Thungyur Lakhung Monastery to the devotees of the Buddhism and congratulated them on the 2550th year of enlightenment of Lord Buddha which was being celebrated in a big way in the State. He said that the restored monastery would attract more devotees to undertake their devotional duties in a more holy manner.

H.H. Dalai Lama said that the Buddhism revolved around four truths to know the causes of sorrow and remedies to resolve the same and modes to be adopted for attaining salvation. He also asked to follow the path shown by Gautama the Buddha so that all human beings could co-exist in a religiously harmonious environment which also need of the hour in the present context.

The Dalai Lama delivered various aspects of Buddhist philosophy and said that the human life could be made successful by incorporating the teachings of Lord Buddha into ones day to day life. He said that spiritual achievements were the real attainments to make the human life successful. He said that physical, mental and vocal sins committed by the human beings were also causes of tensionful life besides a life of atleast who had no faith in any religion or faith which could guide them to lead a religiously sanctityful life. He emphasized the need for generating kindness in the hearts for the suffering humanity or living beings. He said that Buddhism was originated in India and it would be preserved from the same country so that the world could co-exist in peace and harmony. He said that the faith was not limited to temples, monasteries, churches and mosques but needed to be practiced vigorously.

Chief Minister welcomed and thanked H.H. Dalai Lama for consecrating the ancient restored Buddhist Gompa at Rampur Bushehar to the devotees and extended warm welcome on behalf of the people of the State for visiting the town. He said that the people of the State were grateful and indebted to H.H. the Dalai Lama who had blessed them with his gracious presence and setting up of his Government in exile Headquarters at Dharamsala.

Chief Minister detailed out the significant achievements of the State which had made it the role model of development amongst the big states of the country which would not have been possible without the blessings of Devotional Authorities, H.H. the Dalai Lama being one of them. He said that State was poised to progress ahead and attain new heights in all sectors in coming years. He said that the State had strived hard to bring the State to the present status which was also a source of inspiration to rest of the developing States in the country.

Shri Virbhadra Singh said that the State had vast number of Buddhist followers, especially in the tribal areas. He said that H.H. the Dalai Lama had extensively been touring the State and delivering his sermon to the devotees which was a rare opportunity to the devotees. He said that Buddism had been introduced by the King Ashoka and Guru Padam Sambhava who spreaded the message of power, non-violence and communal religious harmony in the society. He said that State had staunch Buddhist followers and best efforts needed to be made to honour their religious sentiments all over the State. He said that Buddhist Circuit Programme was also under implementation to create wayside amenities to the devotees besides restoring, renovating and maintaining the prominent monasteries in the Buddhist dominated areas of the State.

Shri Virbhadra Singh said that seminars would be organized at Rewalsar, Rekong Peo, Tabo, Kee, Keylong and other places where top scholars would deliberate and debate on showing the people right path for salvation and successful life.

Traditional Chhamb Dance (Davil Dance) was also organized by the lamas of Tabo monastery to mark the celebration.