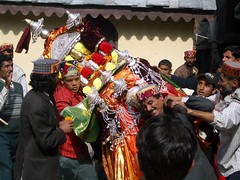 The upper Beas region, perhaps as much as any cultural region in the Indian subcontinent, has maintained a geography of sacred and spiritual places. Most villages in Kullu and Seraj had temples to ancient local gods and goddesses (devtas and devis). Temple groves of the sacred deodar (Cedar) tree were under the care of the devtas and protected against cutting. Some temples were within the villages; others were sited on prominent or dramatic locations in the forest.

These gods’ homes were constructed of stone and Cedar timber, most of them in similar style to human homes. They held rent-free land and granaries, and were supported by one or more pujaris or priests (some Brahmin but mostly Kanet), a manager (kardar), an oracle or shaman, interpreters (chelas), and musicians for festival times. All these positions in a village’s management of sacred sites were hereditary. Management was by the “body of hereditary votaries,” while the position of manager (kardar) was for life. It was quite rare to appeal to the Raja (local ruler).

The devtas also linked village life with the outside world. One way a Raja could make his power legitimate was with gifts to the temples. Rajas often gave endowments in perpetuity to devtas. By the late 1800s one-seventh of the cultivated land in Kullu was temple endowments. Historically, village life was a relatively self-sufficient, local system of subsistence, with links to the natural and supernatural world. As an agricultural system it integrated croplands, forests, and grazing lands. But throughout most of its history this system has also had important ties to two dimensions of the outside world: politically powerful overlords and urban markets linked by trade routes.

Both were controlled by different social groups, which impacted village life in ways which could be either disruptive or stabilizing. The decesions of the “Devta Gods” may go to the extent of declaring anything illegal. eg. One of the biggest foreign direct investment (FDI) projects in the country, the 350 million Himalayan Ski Village in Kulu is facing opposition from the most unusual quarter, the local Jamlu deity, who has exhorted the 365 â€˜devtasâ€™ in the Valley of Gods to oppose the project.