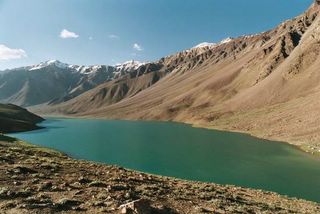 This is the source of the river Chandra. According to some believers, this is the spot from where the god Indra’s chariot took the eldest Pandava brother, Yudhishtra to ‘swarga’ (heaven) in his mortal form.

Colourful tents under the blue sky,around the crystal clear waters of the Chandratal lake is a sight. Reflections of snow-topped high mountains in the lake are simply enchanting.

The mountains peaks with snow caps and slopes around the valley rise up to 3000 meters to 6300 meters. The mountain ranges are called Moulkila and Chandrabhaga which challenge mountaineers.

The Chandratal lake, once a halting place for traders who went to Spiti and the Kulu valley from Tibet and Ladakh attracts a large number of adventure lovers.

The lake in Lahaul and Spiti district is situated at an altitude of 4270 meters. It lies between a low ridge and the main Kunzum range. This lake is also known as Moon Lake.

The lake is 1.5 km long and .75 km wide. A circular trek can be attempted from both Batal on the Manali-Kaza road and the Baralacha pass on the Manali-Leh Highway. Its meadows nestle many wild flowers.

But with the opening of Spiti and Kinnaur inner line area to foreigners in 1992, trekkers can complete a full circuit of the cold desert areas of the tribal belt.

From June to September a large number of tourists visit the lake. This is also the time when shepherds from Kangra, Mandi and Kulu can be seen with their herds of sheep at Chandra pastures.